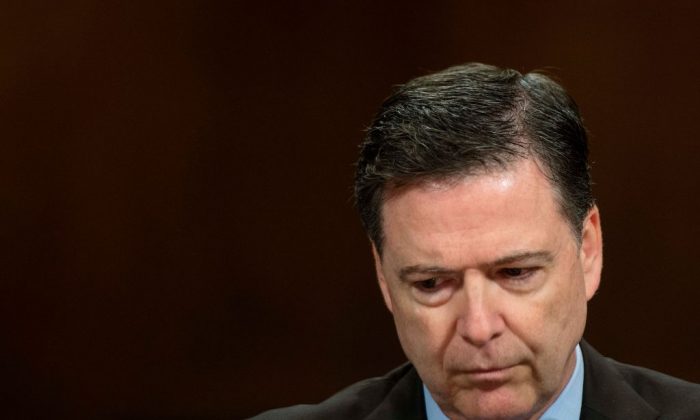 Former FBI Director James Comey testifies before the Senate Judiciary Committee on Capitol Hill in Washington on May 3, 2017. The Department of Justice on Aug. 1 indicated that they would not prosecute Comey for leaking classified memos. (Jim Watson/AFP/Getty Images)
Viewpoints

Is Comey Entirely in the Clear?

On Aug. 1, the Department of Justice (DOJ) indicated that it wasn’t going to prosecute former FBI Director James Comey for leaking classified information. While Comey appears to have been spared on this occasion, he’s not yet entirely in the clear.

The decision not to prosecute Comey was apparently universal and quite “easy.” Prior to his termination, Comey allegedly prepared several memos where he memorialized his conversations with the president. He then gave them to a friend, who passed them to The New York Times.

As reported by John Solomon of The Hill:

“The Justice Department’s chief watchdog is preparing a damning report on James Comey’s conduct in his final days as FBI director that likely will conclude he leaked classified information and showed a lack of candor after his own agency began looking into his feud with President Trump over the Russia probe.

“Prosecutors found the IG’s [Inspector General Michael Horowitz] findings compelling but decided not to bring charges because they did not believe they had enough evidence of Comey’s intent to violate the law, according to multiple sources.”

One of the main reasons the DOJ decided not to charge Comey stemmed from the FBI having classified the memos as “classified” after Comey had transmitted the information. In other words, Comey didn’t knowingly transmit confidential information (he didn’t intend to violate the law).

Understandably, some people will be upset about the DOJ’s decision not to prosecute. This is especially true in light of others being prosecuted for “lying,” including former advisers Michael Flynn and George Papadopoulos. Of course, the DOJ can still choose to prosecute Comey for the alleged leaks at a later time so long as the statute of limitations has not expired.

While Comey appears to have “beaten” this narrow and limited charge, his potential legal exposure is far from over, as U.S. Attorney John Durham, Inspector General Horowitz, and U.S. Attorney John Huber have been investigating “the origins of the Trump-Russia investigation and the conduct of the DOJ and FBI as they carried it out,” according to The Washington Examiner.

These investigations are likely looking into why an investigation was ever started with respect to Trump and his campaign members, and who authorized it.

As reported by Real Clear Investigations:

“Sources tell RealClearInvestigations that Justice Department Inspector General Michael Horowitz will soon file a report with evidence indicating that Comey was misleading the president. Even as he repeatedly assured Trump that he was not a target, the former director was secretly trying to build a conspiracy case against the president, while at times acting as an investigative agent.

“Two U.S. officials briefed on the inspector general’s investigation of possible FBI misconduct said Comey was essentially ‘running a covert operation against’ the president, starting with a private ‘defensive briefing’ he gave Trump just weeks before his inauguration. They said Horowitz has examined high-level FBI text messages and other communications indicating Comey was actually conducting a ‘counterintelligence assessment’ of Trump during that January 2017 meeting in New York.”

If this information is true, Comey will undoubtedly have to explain why he decided to “spy” on Trump and under what authority. Tangentially, Comey will also have to explain why he signed the Foreign Intelligence Surveillance Act (FISA) warrant targeting the Trump campaign when, according to The Spectator, “Comey knew that at least someone inside the Justice Department thought the application tainted and signed it anyways.”

If Comey signed a FISA application knowing that the information it was based on (i.e., the Steele dossier) was false (or unverified), this is problematic.

Mike Huckabee, writing about his discussion with Trump’s lawyer Rudy Giuliani on Fox News’ “The Ingraham Angle” in April, said:

“Giuliani made the point that the FISA applications have to be taken very seriously, as they can’t be contested by the other side. ‘You just don’t sign those things cavalierly,’ he said. The information in them must be verified. But he said it’s obvious in just the first couple of pages that the Steele ‘dossier’ is just a pile of garbage and that Comey could have easily checked to see if there was truth to its major claims, such as that Michael Cohen went to Prague. Comey didn’t even bother to call the passport office.”

After all, the FISA application was utilized to obtain a court order to surveil former Trump campaign adviser Carter Page. If the process to obtain this warrant was the result of improper conduct, those responsible may have abused the FISA process.

While some people are likely frustrated by the decision not to charge Comey, the decision was limited in scope. In the interim, the bigger and more compelling investigations are ongoing. Until such time as they are completed, the U.S. public must continue to wait and have faith in the nation’s system of justice and those who enforce its laws.