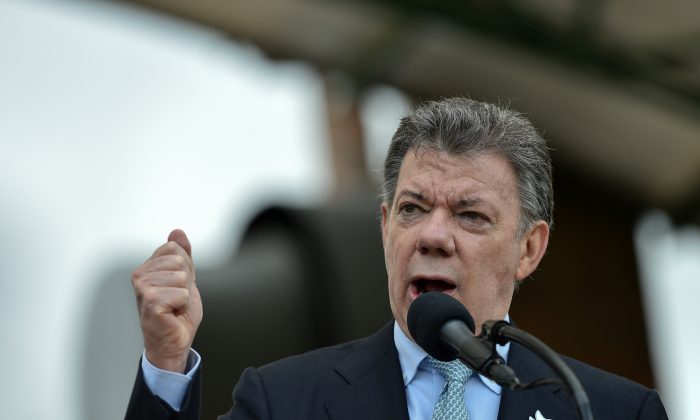 Colombian President Juan Manuel Santos delivers a speech at a military ceremony at the Jose Maria Cordoba Military School in Bogota, on Dec. 19, 2015, during which his ministers of justice and defense signed the government's commitment to the armed forces of not to put at the same level the military personnel who violated the law in the context of the armed conflict with the guerrillas. (Guillermo Legaria/AFP/Getty Images)
Americas

Is Colombia Finally on the Verge of Lasting Peace?

Colombia has been the site of one of the world’s longest internal armed conflicts. Its population has been trapped between different legal and illegal armed groups who have uprooted millions of people and have taken the lives of over 250,000 people. Thousands more have been kidnapped or disappeared.

But now, after several years of peace negotiations between the government and the country’s main guerrilla group, the Revolutionary Armed Forces of Colombia (FARC), an important breakthrough has been made in the form of a new peace accord that is to be signed in March. It sets out a transitional justice process, aiming to achieve a transition to a lasting democracy through truth-seeking about the conflict and its causes, restorative and retributive justice for the perpetrators, reparations for the survivors, and guarantees of non-repetition to prevent renewed conflict.

One of the deal’s strengths is that it enshrines survivors’ rights both to truth and to reparations. This means that in order to be eligible for reduced alternative sentences in a somewhat controversial restorative justice process, all armed groups—not just the FARC, but also the state’s armed forces—will need to commit to telling the complete truth.

With Peace Near, Debate Grows Over Colombia’s Draft

Former President Alvaro Uribe has been one of the fiercest opponents of the peace process, including the proposed transitional justice package. But Uribe himself actually instigated a very similar demobilization process, the Justice and Peace process, with the country’s main right-wing paramilitary group, the United Self-Defense Forces of Colombia (AUC)—and as Colombia prepares to start a new process, it would do well to look at how this previous process unfolded.

The Justice and Peace process started in 2005 and involved the demobilization and reintegration of paramilitary groups. Amnesties were given to those involved in all but the most serious crimes, while perpetrators of serious crimes received reduced prison sentences of five to eight years if they participated in special judicial proceedings focused on truth-seeking and reparations.

The process revolved around “versiones libres,” hearings in which the demobilized paramilitaries were given the opportunity to speak freely about their participation in paramilitary actions, followed by a second hearing involving interrogation by both victims and the Justice and Peace prosecutors.

Paramilitaries were supposed to confess all the crimes they had committed; victims could participate either by asking for information about their cases or by presenting evidence. If the perpetrators were found to have given incomplete evidence, the tribunals were empowered to impose a full prison sentence.

But a decade after it began, the process is still grinding on. With only three tribunals and insufficient financial and human resources to deal with the innumerable serious crimes committed by approximately 30,000 paramilitary members, the number of sentences has been minimal and progress extremely slow.

Worse still, the “truth” obtained through the versiones libres has been only partial, thanks to inadequate questioning by insufficiently trained prosecutors. Until 2013 there were hardly any confessions about sexual violence. Information about those financing or benefiting from paramilitary crimes—particularly massive forced displacements and land-grabs—has been largely absent from the versiones libres.

While victim participation was meant to be a principal aspect of the Justice and Peace process, in practice it has been limited. This is mainly due to financial obstacles and fear in regions where armed groups continue to exist. Many of these new criminal groups, the so-called “Bacrim,” are made up of demobilized paramilitaries who continue to commit similar crimes under new names. Legal and psychological accompaniment to victims has proven largely insufficient, and few illegally obtained assets have been recovered.

The cherry on the cake was the Uribe administration’s 2008 decision to extradite 14 paramilitary leaders to the United States on charges of drug trafficking. This move infuriated not only the AUC but also Colombia’s justice system, which felt that drug charges shouldn’t weigh heavier than crimes against humanity.

The government insisted that Justice and Peace proceedings could be continued from the United States. Some paramilitary leaders, such as Salvatore Mancuso, have indeed continued to participate in the process, some of their confessions even being televised. Others have been excluded from the process for failing to participate in their duties of truth-telling and reparations.

In any case, this process taking place in the United States makes survivors’ participation virtually impossible. At the same time, the relationship between the sentences reached in the United States and the reduced sentences to which the defendants would be subjected under the Justice and Peace Law in Colombia are still unclear.

I myself am working with people in two villages in the Magdalena region, many of whom were displaced by paramilitaries between 1997 and 2007. Several community members here were killed or disappeared.

For many of them, it has been hard or even impossible to physically participate in the process. Travelling to Barranquilla for hearings that take up to several days is simply unaffordable for most formerly internally displaced people, many of whom live in great poverty. They have all but completely lost faith in justice.

Contrary to the peace process’ focus on amnesties, they only began to feel truly safe once the paramilitaries who had terrorized them were demobilized or arrested. The extradition of a paramilitary leader to the United States, seen from the outside as almost a perversion of the process, made a huge difference to them. Yet others also mention the need for the paramilitary to pay for their crimes in Colombia, where the crimes were committed—if not through justice, then at least through reparations to the victims.

The Colombian government mustn’t underestimate the cost and complexity of such a large-scale demobilization and justice process. If it ends up hobbled by an insufficient budget, it might take so long that it actually undermines public trust in the state’s ability to deliver truth and justice.

The conflict’s survivors will need legal and financial assistance, psychological support, and physical protection. Combatants must be disarmed for good and effectively reintegrated into society; restorative justice measures must be designed to offer survivors a meaningful sense of security and reparation.

The stakes are high. If the peace process doesn’t treat the victims and survivors with the care they need and deserve, Colombia’s hard-won peace may end up confined to paper.

Sanne Weber is a Ph.D. candidate at the Centre for Trust, Peace and Social Relations at Coventry University in the U.K. This article was originally published on The Conversation.