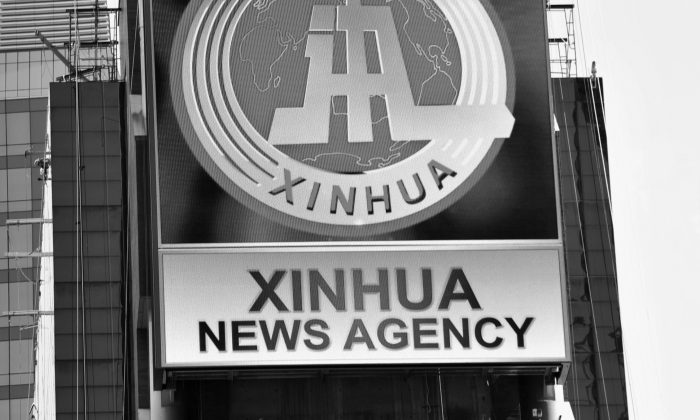 The Chinese regime’s main mouthpiece has been passing off propaganda pieces as serious news items since time immemorial. Finally, like the boy who cried wolf, nobody believes that the propagandists could actually be joking on April Fools’ Day.

“Hopefully everyone won’t believe, create or spread rumors,” the Weibo post continued, and ended with a smiley face emoticon.

Prominent publications like the New York Times (“No April Fooling Please, We’re Chinese), the Washington Post (“No joke. April Fools’ Day has been banned in China”), and Newsweek (“China Bans April Fools’ Day And Warns Nations Not To Spread Rumors”) ran stories which suggested that they considered Xinhua’s message more warning than joke.

And it’s an easy conclusion to reach. After all, Xinhua has a reputation for rigid reporting, and running no-nonsense propaganda pieces inflated with standard Communist Party jargon and ideological messages. The Chinese regime has also continually stressed the need for the Chinese population to steer clear from Western ideals and values—during a recently concluded annual political concave, Li Xiusong, a representative of China’s political advisory body, cautioned Chinese parents against bringing their children to the new Shanghai Disneyland because children could end up “embracing western culture as grownups.”

April Fools’ Pranks Before the Internet

However, a semi-official Chinese news outlet appears to have caught on that Xinhua could be pranking the West as payback for earlier humiliations.

“On first reaction, it seems like the work of hackers, because that’s clearly the sort of joke that websites like the Onion would come up with,” wrote Beijing News, a semi-official publication, in an article entitled “Don’t Try To Guide Public Opinion on April Fools’ Day” that was posted to its official WeChat account.

Xinhua fabricates news on a daily basis. Yet you pretend to be all righteous on April Fools’ Day?
— Strawberry, Weibo user

“Having a ‘fight’ with the Onion on April Fools’ Day is not unacceptable, and it is in fact very necessary.”

Beijing News is referring to an incident in 2012 when the People’s Daily, another prominent state media, mistook a report on North Korean leader Kim Jong Un by the satirical website The Onion as genuine news. To commemorate Kim Jong Un winning a fictitious poll for the “sexiest man alive in 2012,” People’s Daily ran a 55-page photo feature and quoted The Onion that “this Pyongyang-bred heartthrob is every woman’s dream come true.”

“People have the right to celebrate a holiday. And it is their freedom to decide which day they want to let out a hearty laugh. April Fools’ Day might not be listed as traditional culture in our textbooks, but its entertainment value is universal,” Beijing News concluded.

The Xinhua Weibo post was widely shared on the Chinese Internet and remarked on. A good number of netizens felt that Xinhua was playing an April Fools’ Day prank. Many others pointed out that the state mouthpiece has been playing Chinese citizens for fools since its inception.

“Hey—I am Strawberry” from Guangdong wrote on Weibo: “Xinhua fabricates news on a daily basis. Yet you pretend to be all righteous on April Fools’ Day?”

“To make a fool of your friends, that’s joking around; to fool strangers for their money, that’s scamming; and to make a fool of everyone in the country, that’s Xinwen Lianbo,” wrote “Barca Xiaofeng” from Liaoning. Xinwen Lianbo is the most watched and heavily controlled news program in China.

Qu Limin, an assistant professor from the Beijing University of Chinese Medicine, wrote: “How is common folk entertainment the business of the government?”