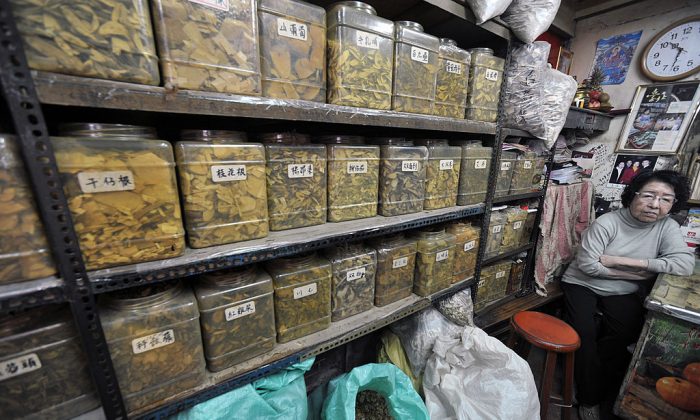 A vendor looks after her shop at the traditional Chinese herb market in Taipei on March 19, 2010. (Sam Yeh/AFP/Getty Images)
By Frank Fang

People looking into traditional Chinese medicine may do well to find the herbs in the United States instead.

Chinese medical professionals, and even the State Administration of Traditional Chinese Medicine, have warned that because of the concentrations of pesticides and fertilizers in Chinese soil, many herbs commonly used in traditional Chinese prescriptions have lost their effectiveness.

“Some say that Chinese medicine could be brought to ruin precisely because of China’s herbs. This is by no means an overstatement,” Wang Guoqiang, head of the Administration, said at a Chinese herbal growth and ecology forum on July 3, state media Xinhua reported.

A 2013 investigative report by Greenpeace found that Chinese herbs grown and harvested in China were laced with pesticides. The report recommended authorities take stringent measures.

Recent years have seen a growth in demand for traditional Chinese medicine. According to Wang, this increase also spurred the widespread sale of home-grown herbs, which are frequently exposed to pesticides and agricultural fertilizers that interfere with their medicinal properties.

Wang is not the first to make public comment on the threats to Chinese herbs. In 2011, Zhou Zhongying, professor at Nanjing University of Chinese Medicine, also warned that Chinese medicine would be ruined by its own ingredients, Chinese news portal Sina reported.

In 2013, Jing Shiming, deputy director of the Guangdong Provincial Association of Chinese Medicine, called for greater regulation to rescue the quality of Chinese herbs, China.com.cn reported.

But the problems go beyond just pollutants and pesticides.

Yang Chaobo, a 46-year-old retired Chinese doctor, practiced traditional Chinese medicine for 20 years and worked with a hospital affiliated with the China Academy of Chinese Medical Sciences before moving to New York in 2014.

“Chinese herbs require special processing,” Yang, who lives in Flushing, told Epoch Times in a telephone interview. “For example, the Rehmannia root needs to be steamed and then baked in the sun, fully nine times. But often in China, this step is not diligently followed.”

Despite the statements by Chinese authorities and doctors, Yang is pessimistic about China’s environment—and the future of medicinal herbs, which he even suggests would be more potent if gathered in the wild rather than farmed due to the shortcomings of Chinese agriculture.

“Environmental bureaus at various levels place little importance on Chinese herbs,” Yang said. “They are incapable of protecting the environment for want of administrative power and funding.”

Yang believes that given the similarities in climate between China and the United States, both the actual effectiveness of Chinese medicine as well as confidence in its efficacy would be improved greatly if the herbs were simply grown on American farms: