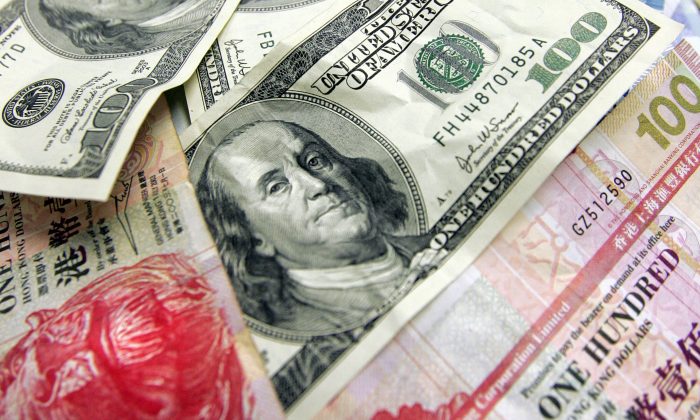 Influx of capital has authorities puzzled
By Li Zhen

Some bankers have said it is unusual that the HKMA is performing so many capital injections. There has not been a consensus in the industry as to why there has been a sudden increase in the demand for the Hong Kong dollar or where the influx of money is going.

The public also has many different opinions on the subject. Regulatory authorities and financial institutions are closely monitoring the market development.

Some suspect the money is coming from mainland China. According to financial experts, the funds outstanding for the foreign exchange of the People’s Bank of China has been rapidly decreasing for the past two months.

This may reflect a large outflow of capital from mainland China, which could be the source of Hong Kong’s influx of capital, the financial experts stated.

On July 10, during the European trading hours after the Hong Kong market closed, the HKMA undertook the selling of US dollars and injected $2.325 billion into the banking system. Along with the $2.6 billion that was injected during the American session in the morning, the HKMA injected a total of $4.9 billion, which raised the aggregate balance of the banking system to $186.981 billion by July 14.

The HKMA has stated in a press release that the influx of money into Hong Kong may be related to merging the activities of the Hong Kong dollar with corporate dividends. They explained that their repeated capital injections over the past few days are meant to ensure that the lower exchange rate limit of HK $7.75 per US dollar is met.

According to the Asia-Pacific chief investment officer at UBS Wealth Management, Pu Yonghao, the recent cash inflow might be because mainland China and Hong Kong have cheaper stock market values. Moreover, there have been many new shares in the market, attracting many investments.

Most companies listed are relatively small or medium-sized, the funds raised are not high, and there is nothing that would attract a large influx of money.

There are also rumors that the influx is for the pilot program Shanghai-Hong Kong Stock Connect, which will launch in October. However, people in the treasury market believe that there is no reason for investors to invest two months early and at such a high Hong Kong dollar value.

Stanley Ng Yuet-ning, former Hang Seng Bank economic researcher and Hong Kong independent financial analyst, said perhaps the capital injection on July 1 was to stabilize the worries in the market. The central government may have been worried that there would be political conflicts in Hong Kong on July 1, the day of the Hong Kong protest for universal suffrage.

However, this argument has not been confirmed.

What Goes In Must Go Out

Another possibility is that the HKMA made multiple interventions because they are worried about the risks that could occur when this large influx flows back out.

“Many risks have continued to increase,” said Ceajer Chan Ka-keung, Secretary for Financial Services and the Treasury.

“Though the influx of money makes investors happy, one day the rush of hot money will leave. The government will pay more attention to the movement of the capital and its associated risks,” said Chan.

Hong Kong political and economic columnist Liao Shiming believes that the HKMA’s unusual capital injections mean that there is considerable pressure on the capital market. The HKMA is more worried about the outflow of capital than the inflow, he said.

“Hong Kong has implemented an exchange rate system connected with the U.S. dollar,” said Liao. “The usual situation is that if this amount of money is still in Hong Kong, even if it cannot be converted to U.S. dollars and taken away, the HKMA will not interfere.”

“Since the HKMA is interfering, this represents that a certain amount of capital has outflowed, and it is not a small number.”