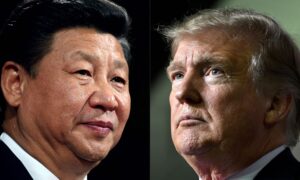 US Revokes Visas of Over 1,000 Chinese Nationals; The Coming Space Race Between the US and China
0
Share Now
TelegramFacebookTweetEmailTellMeWeReddit
Copy Link 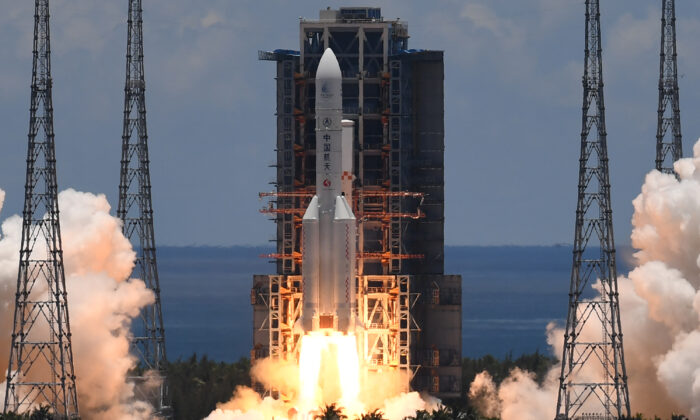 A Long March-5 rocket, carrying an orbiter, lander and rover as part of the Tianwen-1 mission to Mars, lifts off from the Wenchang Spacecraft Launch Center, in China's Hainan Province, on July 23, 2020. (Noel Celis/AFP via Getty Images)
Thinking About China

Is China Preparing to Blitz the Moon?

When the Chinese Communist Party (CCP) commences its manned moon program, it may do so in a big way, as its goal is to control the Earth-moon system to enforce its hegemony on Earth and then regulate access to the future “Space Economy.”

This means the United States must exploit what may be temporary advantages in technology to create an early dominant lunar presence for democracies.

For most of the past decade, the Chinese regime has been peddling the idea that its manned moon program may not start until around 2030. This appeared to be confirmed by Chinese revelations that its main moon mission space launch vehicle (SLV), the China Aerospace Science and Technology Corp. (CASC) Long March-9, wouldn’t be in service until about 2030.

But now it’s possible to assess that China may get there well before 2030. China began to reveal a possible acceleration of its moon plans in November 2018, when it revealed a new 5-meter diameter manned SLV with a three parallel booster configuration, like the 63-ton to Low Earth Orbit (LEO) SpaceX Falcon Heavy. Few details were revealed at the time, not even its name, so Chinese space enthusiasts dubbed it the “921 Rocket” after China’s manned “921 Program” from 1992.

Then, in September 2020, an official subordinate to the Armaments Department of the Central Military Commission of the People’s Liberation Army, which controls China’s space program, officially confirmed for the first time that China had an active manned moon program, and was developing a new manned moon lander, and the new manned SLV. This is the 921 Rocket designed to loft about 70 tons to LEO, and about 25 tons to the moon.

It’s possible that future versions of this SLV will feature reusable first stages like Falcon Heavy, helping China to significantly reduce the cost of sending people and supporting payloads to the moon.

The interest and attention paid to this new rocket caused some Chinese observers to speculate that the Long March-9 program has possibly been abandoned. But this was put to rest by a Nov. 26, 2020, report in China Daily that stated, “China Aerospace Science and Technology Corp [CASC] has estimated that about 10 Long March 9s will be needed each year from 2030 to 2035 in China to serve the nation’s robust demand for heavy-lift rockets.”

This means that the Chinese regime may be planning to build 60 of its Long March-9 super-heavy space launch vehicles (SLVs) over a period of six years. This has huge implications for China’s ambitions to build a dominant presence on the moon and to begin colonizing Mars.

While it isn’t yet clear that the CCP leadership has approved such plans, CASC likely wouldn’t be disclosing such SLV requirement numbers without some level of approval or encouragement from Party leaders.

China Daily also stated, “The super-heavy rocket will be 93 meters tall, have a liftoff weight of 4,140 metric tons, and thrust power of 5,760 tons. Its core stage will be about 10 meters in diameter … will be able to transport spacecraft with a combined weight of 140 tons to a low-Earth orbit … will also be able to place spaceships weighing up to 50 tons in an Earth-moon transfer trajectory for lunar expeditions.”

Other Chinese sources indicate that other possible versions of the Long March-9 could loft 65-ton payloads to the moon.

Such limited data, however, does offer some idea for how rapidly China might populate the moon. One might start by estimating that China devotes 40 of the potential 60 Long March-9’s to moon missions, with the remaining to be used to support a second-generation Low Earth Orbit space station, and to begin sending people to Mars.

The 50-square-meter interior and 22.5-ton Tianhe module that could be launched by April for China’s new space station can support a crew of three. Perhaps a moon base of four similar size modules might support a crew of six people. Assuming a Long March-9 could transport two Tianhe-size moon base habitat modules to the moon, then 20 Long March-9 missions might begin the building of 10 separate Chinese moon bases.

Such potential Chinese moon “blitz” ambitions are of concern because it’s also possible that water-ice, the most important early lunar resource objective, may be available only in a small number of locations at the moon’s South Pole. Remember, the CCP is capable of “imperialism” as in the South China Sea.

In March 2019, the Trump administration set a goal of getting to the moon by 2024, which doesn’t appear realistic given congressional reluctance to provide additional funding. The U.S. National Aeronautics and Space Administration (NASA) is developing its nonreusable Space Launch System superheavy SLV that could send 27 to 46 tons of cargo to the moon. It’s a classic risk-averse NASA program but its projected payload cost to the moon is about $20,000 per kilogram.

Starship could be ready for moon missions by 2022 to 2023 and has been selected by NASA as a possible moon lander for its Artemis program. But it offers a potential amazing strategic advantage, if projections are correct, of transporting payloads to the moon for about $2,000 per kilogram.

Perhaps China’s potential plans to build such a large number of Long March-9 superheavy SLVs may be their response to the Starship, along with an accelerating investment in their own reusable SLVs.

This only redoubles the need for Starship to succeed, so that the United States, its allies, and partners can use it to build a sufficient moon presence before China does, to have a better chance of deterring the CCP from lunar imperialism and aggression. The advantages offered by Starship, if quickly exploited by resolute U.S. leadership, could help thwart the Chinese regime’s hegemonic ambitions.