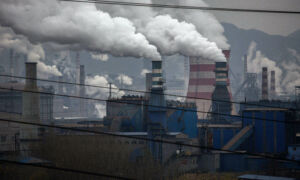 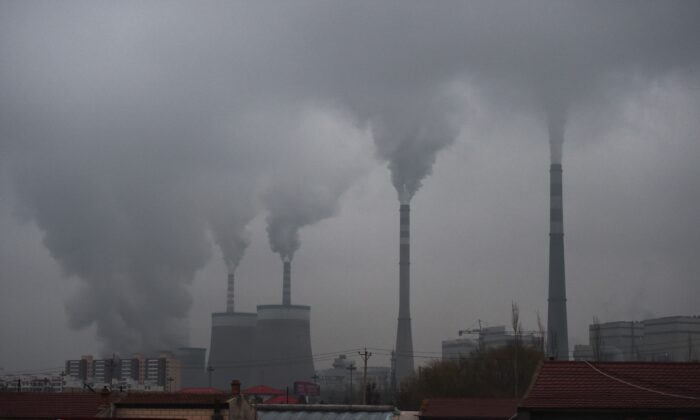 (FILES) This file photo taken on November 19, 2015 shows smoke belching from a coal-fueled power station near Datong, in China's northern Shanxi province. - Chinese President Xi Jinping vowed in an address to the UN General Assembly on September 23, 2020 that the world's largest greenhouse gas polluter will peak emissions in 2030 and go carbon neutral by 2060, in what environmentalists hailed as a major step forward. (Photo by GREG BAKER / AFP) (Photo by GREG BAKER/AFP via Getty Images)
China

China, the world’s largest emitter of greenhouse gases, established its first carbon-neutral financial leasing service platform in Nansha, Guangzhou. The State Council of the Chinese Communist Party (CCP) is also set to launch an online trading system of emission allowances this month. However, international experts believe that China’s green bonds usually do not meet the standards.

According to Chen Wanqing, deputy director of the Finance Bureau of Guangzhou Nansha Development Zone, the platform can develop climate investment and financing products, which will help companies in Guangdong, Hong Kong, and Macau issue green bonds. And at the same time, it claims to enable the regions to achieve “emission peak” and “carbon neutrality.”

At the Global Climate Video Summit in April 2021, Xi Jinping, China’s leader, promised that after China’s carbon “emissions peak” by 2030, they would begin to reduce emissions and reach “carbon neutrality” by 2060. Xi asked the Western developed countries to provide financial and technical support.

Sarah He, an expert in the financial sector and currently residing in the U.S., believes that the CCP hopes to utilize its so-called emission peak and carbon neutrality goals to attract large sums of foreign investment. She believes the CCP’s move toward green bonds is only a façade.

On July 14, the CCP’s State Council Information Office held its regular meeting at which Sun Guofeng, CCP’s director of Monetary Policy of the Central Bank, said that the bank would convert carbon emission reduction into real currency and provide low-cost funding through financial institutions to help finance key projects.

However, Sarah He believes that “reducing carbon emission” is not the real purpose of the so-called green financing platform initiated by the CCP and the local enterprises. It is to obtain investments and benefits.

“Even if the platform can somehow improve carbon emissions, the effect is minimal. A large amount of bad debt will likely incur and aggravate a credit crisis. The main reason is that Chinese companies generally lack integrity, are managed poorly, use funds ineffectively, and have many other problems,” Sarah He added.

The international community has similar concerns over the CCP’s green bonds.

On May 27, the Wall Street Journal stated that many of China’s green bonds did not comply with international regulations because half of the green bonds issued could be used in the company’s daily operation and not for what they intended, which is to improve its carbon emission. According to international regulations, only 5 percent of green-bond funds can be used for the company’s daily operation.

“This could increase the risk of greenwashing, where the true environmental benefit of the transaction is overstated,” said Lori Shapiro, a sustainable finance analyst at S&P Global Ratings.

In addition, Alan Meng, head of data analysis and services at Climate Bonds Initiative (CBI), also pointed out that in the first half of this year, 33 of the 127 CCP-issued green bonds did not meet the standards.

According to a Reuters report from April, the CCP and Chinese companies are “greenwashing” to obtain more investment funds. Chinese regulators intentionally implement different regulations on green-bond issuances to prevent international investors from having a clear understanding when making investments, bringing enormous risks to the investors.

Carbon Neutrality refers to achieving net-zero carbon dioxide emissions. This can be done by balancing emissions of carbon dioxide with its removal (often through carbon offsetting) or by eliminating emissions from society (the transition to the “post-carbon economy”). At the United Nations General Assembly in September 2020, Xi said that China, as the world’s largest emitter of greenhouse gases, would reach carbon neutrality by 2060.

Emission Peak refers to China’s aim to bring its total greenhouse gas (CO2) emissions to a peak by around 2030. However, Xi has also pledged to reduce China’s carbon dioxide emissions by “at least” 65 percent from 2005 levels by 2030.

Green Bonds refer to the financing tools in which all of the funds raised by the issuer are to be used for expenditures or loans on green investment projects, including climate change, environmental protection, renewable energy, and carbon reduction, and others.