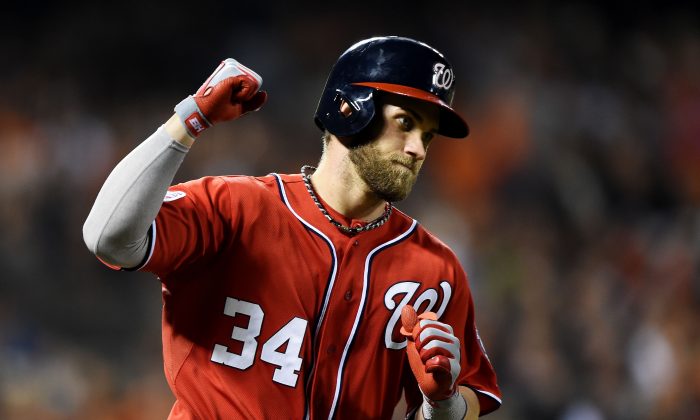 Bryce Harper is on pace to be named MVP in his age 22 season. (Thearon W. Henderson/Getty Images)
Baseball

Washington Nationals outfielder Bryce Harper continues to have himself quite a season. The 22-year-old from Las Vegas is currently hitting .331/.463/.690 (average/on-base/slugging) with 27 home runs and 64 RBIs. That puts him on pace for 48 home runs and 113 RBIs. If he keeps up his incredible patience at the plate, he’ll total 122 walks on the season.

These are historic numbers for sure and they’re all from a guy who should just be finishing college. For perspective, Cubs celebrated rookie Kris Bryant is already 23. Harper, already in his fourth season, will turn 23 in October.

Harper’s current 1.153 OPS (on-base plus slugging) for the season ranks up there with only the best young hitters in the modern era of baseball. Let’s examine.

Last year’s AL MVP Mike Trout was 22 for more than half the season and finished with great, but a not-as-impressive 36 home runs, 111, RBIs, and a .287/.377/.561 batting line. He was actually better the previous two seasons when he finished runner-up to Miguel Cabrera in the MVP voting. But his OPS was below 1.000 both years.

Now in all fairness to the previous four greats mentioned, Harper’s season is only halfway done and we haven’t started the dog days of August. His pace is pretty good though.

Going back to the pre-steroid era (and beyond the modern era that started in the 1960s) players like Jimmie Fox in 1930, Joe DiMaggio in 1937, Ted Williams in 1941, and Eddie Mathews in 1954 put up an OPS of over 1.025 at a similar age—though the game was different back then. Strikeouts were fewer and pitchers remained in the game much longer—specialized bullpen roles didn’t come about until the 1990s.

Quite simply Harper is having the best season by a player this young in the modern era.