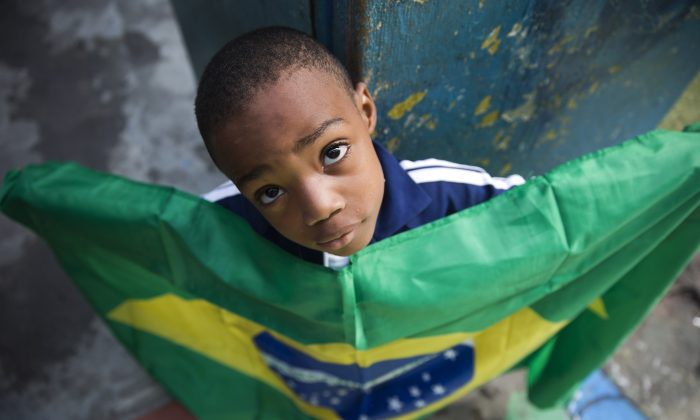 A boy holds a representation of Brazil's national flag during a protest against public money spent on the preparations for the 2014 World Cup, at the Jacarezinho slum, in Rio de Janeiro, Brazil, on May 10, 2014. (AP Photo/Hassan Ammar)
Opinion

The year 2014, supposed to be one of celebration for Brazil, has turned into a year of self-doubt and soul-searching. Coming on top of a series of failures, the announcement by the vice president of the International Olympic Committee that Rio de Janeiro’s preparations to host the 2016 Summer Olympics was “the worst I have experienced,” have added to growing criticism of the Brazilian government. Yet examination of the country’s record shows that some failings notwithstanding, Brazil has been successful in hewing to its policy of social transformation and cooperative foreign policy.

When Brazil won the right to hold the World Cup back in 2007, the economy was growing strongly. Then-President Luis Inacio “Lula” da Silva, seen as a major player on the global stage, went on to play a key role in the emergence of the G-20 as the forum for coordinating international action on the global financial crisis following the collapse of Lehman Brothers.

Brazilians planned a global coming-out party, but President Dilma Rousseff has presided over slower economic growth, and preparations for the World Cup have been marred by the deaths of eight construction workers, construction delays, and protests, sometimes violent, over tournament costs. Despite economic progress of the past decade, the country still faces considerable social problems and public services and infrastructure in dire need of more investment.

The mood is anxious. Along with facing bad headlines over World Cup preparations, Rousseff is being accused by political opponents and former diplomats of turning her back on the country’s international responsibilities. Brasilia has said little about the crisis in Ukraine, and even the political crisis in neighboring Venezuela, marked by violent anti-government protests, has evoked little public reaction, though the Brazilian government says it is concentrating on quiet diplomacy. Foreign Minister Luiz Alberto Figueiredo did not see the point of attending the Geneva II Syria peace talks, sending a junior official when most major countries sent senior delegations.

Such criticism is unfair, according to Kjeld Jakobsen, foreign policy spokesman for the Rousseff’s Workers’ Party, who dismisses it as political point-scoring expected during an election year.

Jakobsen points to Rousseff’s initiatives on U.S. spying on foreign governments and publics, including her own email and phone calls, as revealed by a former contractor for the U.S. National Security Agency. At last September’s U.N. General Assembly, Rousseff publicly condemned the United States for the NSA’s indiscriminate spying on private communications and accused Washington of industrial espionage. Since then Brazil—with the support of Germany—drafted a successful U.N. resolution to guarantee rights to privacy for Internet users, and last month Brazil hosted an international conference on reform of global Internet governance.

Brazil has also succeeded—with active lobbying from the president herself—in getting its candidates elected as the new heads of the World Trade Organization and the U.N.’s Food and Agriculture Organization.

The country continues to be a major player in the G-20, and Rousseff has invested time in BRICS summits, along with Russia, India, China, and South Africa. This year’s summit will be held in the Brazilian city of Fortaleza. Brasilia has also become a major investor and aid donor in Africa, a priority for Lula, who was fond of pointing out Brazil, with the largest population of African descent outside Africa, has a historical responsibility.

Rousseff does travel less then Lula, and, according to Brazilian officials who know them both, she has little time for the formalities of diplomacy and does not enjoy the limelight the way her predecessor did. She has also put less effort into lobbying other countries for reform of the U.N. Security Council where Brasilia has pushed for a permanent seat since 1945.

Under Lula, the country ramped up its campaign for U.N. reform as it rose to be the world’s seventh largest economy. But the United States has conspicuously failed to endorse Brasilia’s demand for a Security Council seat, symptomatic of the rocky relations between the two countries over the years. Washington sees Brazil as part of the West, even though the country often refuses to follow Washington’s lead on foreign policy. Brazil, culturally part of the Western world, is unlike the United States by eschewing the use of force in international relations and opposing intervention in the affairs of other states, instead championing multilateral conciliation. This stance lies behind Rousseff’s reticence to interfere in Venezuela’s political crisis and also why she is leading a multilateral effort to reform Internet governance.

But if Brazil wants a seat at the top table, it can expect more pressure from other countries to abandon its traditional emphasis on conciliation and take sides in international disputes, such as Ukraine, that are becoming increasingly common as power becomes more diffuse in the global system.

That is something the Brazilian government is not currently prepared to do. According to Luiz Augusto de Castro Neves, former Brazilian ambassador to China and president of the Brazilian Center for International Relations, the country is taking a lower profile in international affairs under Rousseff, but, he argues, this isn’t a retreat from the world, but rather a return to the norm following Lula’s unusually active foreign policy.

Rousseff has given priority to domestic affairs, as is the case with developing infrastructure for the World Cup and the Rio Olympics in 2016 as well as coping with slower GDP growth. She has focused on consolidating the economic and social progress made under Lula and his predecessor, Fernando Henrique Cardoso, which saw stabilization of the currency, rapid economic growth, and the anti-poverty program Bolsa Familia—helping to raise 30 million people out of poverty and into the new middle class.

Brazil, even as it takes a less active global role, also moves cautiously in South America where its economic predominance suggests it should be the regional leader. Under Lula, Brasilia led the formation of the new regional bloc UNASUR, but the grouping has yet to prove it’s more than a talking shop despite agreeing to mediate in Venezuela. Mercosur, the common market established in 1991, which includes Brazil, Argentina, Paraguay, Uruguay, and now Venezuela, has also disappointed the hopes of those anticipating free movement of capital and labor.

The quietude of Brazil over Venezuela, as well as its passive reaction to the Bolivian government’s nationalization of its gas industry in 2006, which hit Brazil’s energy giant Petrobras hard, shows a reluctance to exercise leadership in the region.

Rousseff has suffered by comparison with a charismatic predecessor feted around the world, even while forced to focus on unfinished business from the Lula years, such as actually mounting the World Cup rather than just winning the right to host it and managing a slowdown in the global economy which, along with long-standing bottlenecks in Brazil’s infrastructure, has led to slower growth.

The reasons for caution are many. In March, Brazil marked the 50th anniversary of the coup that deposed a leftist president and led to 21 years of military rule. In October, the country goes to the polls to elect a president, and incumbent Rousseff is favored to win, possibly after a runoff.

Her detractors may accuse her of retreating from the world stage, and supporters suggest she is just recalibrating from the more exuberant Lula years. Still, the fundamentals of Brazilian foreign policy have not changed, and Brazil will continue to pursue its interests, through multilateral and diplomatic channels rather than the assertion of hard power.

Alistair Burnett is the editor of “The World Tonight,” a BBC News program. Copyright © 2014 YaleGlobal and the MacMillan Center. This article was previously published on Yaleglobal.yale.edu.