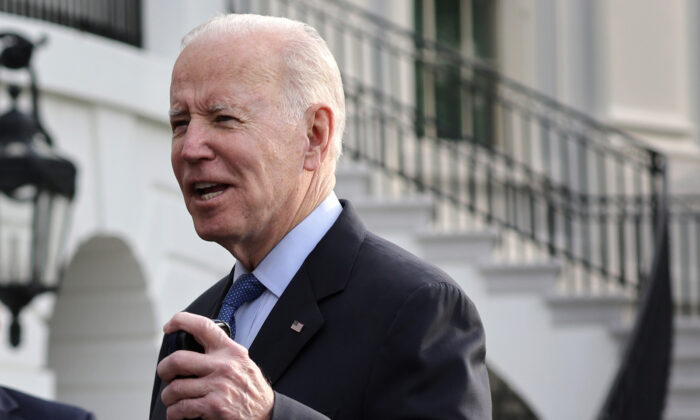 President Joe Biden speaks to members of the press prior to a Marine One departure from the White House in Washington on March 23, 2022. (Alex Wong/Getty Images)
Economic Policies

President Joe Biden is advertising his 2023 budget proposal as being fiscally solvent, but critics say claims that it lowers the deficit are misleading.

When Biden first announced the budget plan Monday he listed “fiscal responsibility” as its first value, noting a more than $350 billion cut to the deficit last year and a projected $1.3 trillion cut this year.

“That would be the largest one-year reduction in the deficit in U.S. history,” he said.

The budget plan says it will cut deficits and debt by more than $1 trillion over the coming decade.

While it’s true the deficit has been reduced under Biden, that reduction is relative to the record $3.1 trillion deficit reached in 2020 as a result of emergency government spending meant to address the outbreak of the CCP (Chinese Communist Party) virus.

The Congressional Budget Office (CBO) also projected $500 billion less in deficit spending for 2021 than what actually took place under the Biden administration. The CBO estimated in February of 2021 that deficits would be about $2.3 trillion during that fiscal year but the end total under Biden turned out to be $2.8 trillion.

And Senior Policy Analyst from the Heritage Foundation Richard Stern, who specializes in budget policy, says the newly proposed budget’s 10-year projection on deficit spending is factoring in economic growth assumptions “that make absolutely so sense.”

“The irresponsible result is a budget that would produce trillion-plus dollar deficits as far as the eye can see and ever-growing federal debt as a share of the overall economy,” Crapo’s statement reads.

Biden’s budget plan totals $5.8 trillion with $1.4 trillion in new spending across government agencies. It also includes a “deficit neutral” reserve fund meant to pay for additional pieces of Biden’s spending agenda, formerly known as “Build Back Better,” that have yet to be approved by Congress.

These new costs are meant to be offset by a minimum 20 percent tax on households worth more than $100 million and an increase to the corporate tax rate from 21 percent to 28 percent, according to a “fact sheet” put out by the White House.  Biden has continually said that under his administration no one making less than $400,000 a year will pay more in taxes.

Biden’s proposed tax on the wealthy, which the White House says will raise $360 billion in revenue, has become a point of contention—earning praise from progressive Democrats and criticism from Republicans and some centrists in the Democrat party.

“There’s no way to fix our broken tax code without getting at the problem of billionaires avoiding taxes for decades, if not indefinitely,” Wyden’s statement reads.

But Sen. Joe Manchin (D-W. Va.), who represents a key swing vote from Biden’s own party, has voiced opposition to the tax, pointing out that it would tax assets that have yet to be liquified.

“You can’t tax something that’s not earned—earned income is what we’re based on,” Manchin told reporters. “Unrealized gains is not the way to do it.”

Stern adds to Manchin’s argument saying that the majority of wealth for people with more than $100 million is often tied up in businesses rather than luxury items like artwork or yachts.

“You’re talking about the trucks, the factories, the equipment, you know, the actual tools and things a business has to conduct their business—and, by the way, employ people, pay people wages, make the products that enrich people’s lives,” Stern told The Epoch Times.

A “no” vote from Manchin would mean the budget plan is dead on arrival unless Biden can garner some support from Republicans.

What Would Biden’s Proposed Budget Spending Pay For?

While Biden and his administration have been vocal in touting the “fiscal responsibility” of the proposed budget for FY 2023, they’ve also highlighted the steps the budget takes to address crime and bolster national security.

Biden’s budget ups funding for law enforcement amid a nationwide increase in violent crime. The rate of violent crime nationally reached a ten-year high in 2020, according to data from the FBI. This included a year-over-year jump in homicides from 6,977 in 2019 to 9,630 in 2020.

And several major cities reported dramatic increases in crime last year. Some estimate last year’s nationwide murder rate to be near a 25-year high. The murder rate was estimated to be 6.9 murders per 100,000 people in 2021.

Biden’s budget would steer $3.2 billion for state and local governments to put more cops on the beat.

It also requests $37.7 billion in discretionary funding for the Department of Justice (DOJ), with a $1.7 billion increase for federal gun trafficking enforcement.

It also steers funding, $6.9 billion, towards strengthening NATO and deterring Russia amid the ongoing war between Russia and Ukraine. Congress has already approved $16.8 billion for Ukraine in addition to billions more the Biden administration is steering towards military and humanitarian support to Ukraine in its defense against Russia’s invasion.

The budget includes nearly $1.8 billion for the State Department and the United States Agency for International Development (USAID) “to support a free and open, connected, secure, and resilient Indo-Pacific Region and the Indo-Pacific Strategy.” It also steers $400 million towards “countering the People’s Republic of China Malign Influence Fund.”

“The world has changed,” Biden said Monday. The United States “is once again facing increased competition from other nation states—China and Russia—which are going to require investments to make things like space and cyber and other advanced capabilities, including hypersonics.”

While Biden and his administration have placed addressing crime and increasing defense at the forefront of budget messaging, officials have made less mention of some of the budget’s other investments, namely those that are meant to address the issues of “equity” and “climate change.”

Biden’s proposed funding includes more than $18 billion across government agencies for new climate programs. It also includes the largest funding request ever for the Environmental Protection Agency (EPA), Department of Energy, and Department of the Interior.

Part of the EPA’s new funding, $1.45 billion, would go towards “environmental justice” for communities that are “too often left behind,” according to the fact sheet.

Another $11 billion in Biden’s budget would go towards “international climate finance,” which the fact sheet says will “accelerate the global energy transition to net zero emissions by 2050.”

Biden’s environmental spending would include $3.3 billion on new energy programs, with $500,000 for weatherizing and retrofitting low-income homes.

These and other climate-related measures in the proposed budget have earned praise from environmental groups.

“President Biden is telling us that his values lie with the American people, our clean air and water, climate action, and environmental justice,” said Sierra Club Director of People and Nature Policy Kirin Kennedy in a statement. “The Sierra Club appreciates President Biden for proposing a budget rooted in advancing an equitable and just recovery that centers people over polluters and advancing these efforts through making sure corporations and the wealthiest pay their fair share.”

The White House fact sheet also highlights $2.6 billion in spending said to “advance gender equity and equality across a broad range of sectors.”

Other items in Biden’s spending plan include public health initiatives that come in addition to the $22.5 billion the president is requesting from Congress to fund his National COVID-19 Preparedness Plan released earlier this month.

Should The Government Be Spending More?

Biden says that these and other spending items he’s trying to push through Congress are “investments needed to bring down costs for American families and expand our productive capacity.”

But critics of government spending plans, like Stern, are skeptical that Biden’s budget will address the rising costs Americans are paying as the country faces a 40-year high inflation rate.

“The government doesn’t create resources, it can merely reallocate them and causes destruction while it’s doing it,” said Stern. “When the government spends money, it’s stealing resources from a country and reallocating them in a haphazard fashion that actually destroys productivity.”