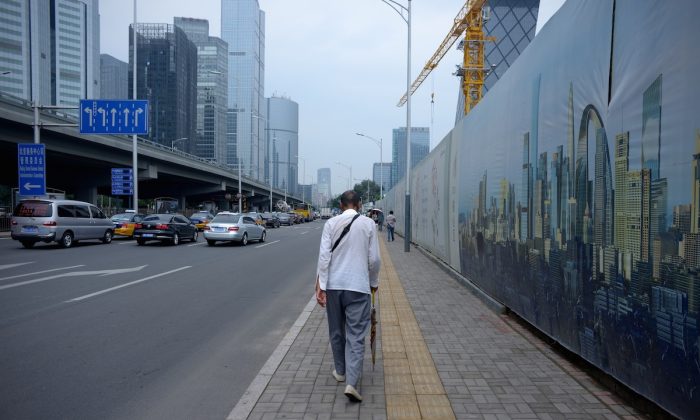 A man walks past a poster outside a construction site in Beijing on July 28,2015. (WANG ZHAO/AFP/Getty Images)
China

Is Beijing’s Economic Model Out of Tricks?

Over the past 35 years, China’s government-controlled economic model, and its method of measuring growth, have undergone several reforms. Starting with a system it inherited from the former Soviet Union, China transitioned to a GDP index system with international standards in the late 1970s. But since the 2008 world financial crisis, China’s GDP has become stimulus driven. This is unsustainable. We are beginning to see the fallout.

I graduated in 1981 in economics and became a teacher at the same university, teaching statistics. The statistics taught in China at that time were copied from the former USSR and were based on Marxist theory. It only acknowledged value of goods produced and was called Material Product System (MPS). It excluded tertiary industries.

Back then, the United Nations specifically used this MPS system to release economic data from the USSR, Eastern Europe, China, and some other countries. Its core indicator was gross output. For example, if a business expended 70 yuan in materials (that is, raw materials, power, machine depreciation, etc.), 20 yuan in salary, and 10 yuan in profit, its output was 100 yuan.

Two, was an operational definition: A product has achieved “output value” after having been “checked and stored in inventory.” It had nothing to do with the final whereabouts of the product. This created good industry news, but poor business results. Manufacturing plants reported the realization of output value once products reached warehouses. However, business would suffer if the products could not be sold.

Government controlled economics uses output value as the core index. But output value distorts the true picture of the economy. Precisely in order to eliminate the shortcomings of this command economy system, economic reforms began in 1978.

In market-oriented reform, China abandoned the MPS system and adopted the worldwide System of National Accounts (SNA). Businesses only count net output, which consists of wages plus profit, so-called value-added. Namely it is the output value of goods sold minus the cost of materials used. The country would sum up all net output of businesses, including tertiary industries. This is the country’s gross domestic product (GDP).

From the expenditure standpoint, GDP is also equal to total consumption, plus total investment, plus government spending, plus total net exports.

This reform was of great significance, providing an appropriate measurement of China’s market operations and connecting Chinese statistics with international standards. China’s economic progress can be attributed to market mechanisms, in particular export industries.

The use of the GDP index system was a step in the right direction. But later on Chinese authorities began to treat GDP as MPS. After the 2008 financial crisis, Beijing launched a 4 trillion yuan stimulus plan. Large sums of money ended up in state-owned enterprises and government departments, especially local governments, through grants and bank loans. GDP maintained rapid growth, achieving Beijing’s goals for a number of years. Of course, figures from the Bureau of Statistics needed to be approved by the Chinese Communist Party (CCP) and the central government.

This government controlled China Model “appeared” to be better than the market economy of the West.

Currently, however, the consequences of the 4 trillion yuan stimulus package have become manifest: a huge number of vacant real estate projects, manufacturing overcapacity, huge debts owed by local governments, etc. This stimulus-based GDP was similar to the output value of products that could not be sold under the command economic system.

It is not possible for countries with more mature, although by no means perfect, market mechanisms and democratic systems to implement a stimulus plan as China did. Governments of those countries cannot arbitrarily and rapidly allocate such huge amounts of money. Legislatures and the media all monitor such governments. Enterprises must be responsible to production and investors in a market system.

During the 2008 financial crisis, the U.S. government did vigorously rescue the financial market and some enterprises, but not to save the stock market. Once the crisis was over, the market resumed normal operations and went through the process of adjustment, recovery, and growth.

At present, compared to China, the U.S. economy is robust and dynamic. The overall trend in Europe is also better than it is in China.

Unfortunately, government intervention and regulation happened again this year in the stock market. To prevent GDP from slowing down and to solve the difficult economic situation, Beijing stoked the bull market through a variety of policies and financial leverage. Thus, 9 trillion yuan, or more, went into the stock market, pushing the index over 5,000.

When the Shanghai and Shenzhen stock market crashed on June 12, Beijing launched an aggressive rescue through a series of drastic measures, including police investigations to deter selling of stocks, administrative orders to prohibit major shareholders from selling shares within six months, and boosting big blue-chip companies’ stock prices while half of all listed companies remain under suspension.

This is an abridged translation of Ren Ze’s article published in China In Perspective. Ren Ze is a former statistician in China and a columnist on current affairs.