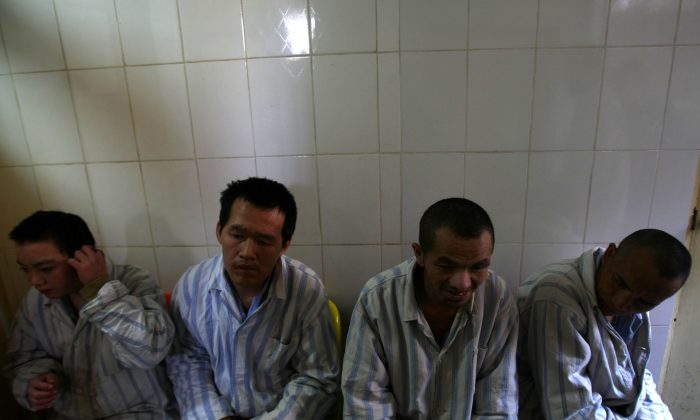 Patients wait to eat in the Kunming Mental Hospital on Dec. 1, 2007 in Kunming of Yunnan Province, southwest China. The Chinese authorities are rolling out a new mental health law, but many doubt it will really prevent the abuses that it is supposed to. (China Photos/Getty Images)
China

Is Beijing Really Committed to Its New Mental Health Law?

China’s first-ever mental health law will take effect on May 1, but rights groups remain skeptical that it will have any real effect on curbing wrongful institutionalization by communist officials.

Passed last October, the new legislature stipulates that mentally ill patients must now give their consent before receiving inpatient treatment, unless considered a danger to themselves or others. Supposedly, only psychiatrists will have the authority to commit people to institutions, but treatment may be compulsory for patients diagnosed with a severe mental illness. Inpatients’ private information will also be protected.

The new regulations were adopted after nearly 30 years of advocacy by Chinese and international rights critics and mental health professionals, combined with media pressure.

Tens of thousands have been shunted into China’s psychiatric facilities, often as a form of punishment by officials against dissidents and whistleblowers, according to Voice of America.

Examples are ample. Tiananmen Square Massacre protester Wang Wanxing was incarcerated in psychiatric facilities for 13 years to “treat” his “political paranoia,” after he attempted to unfurl a banner in public.

Petitioner Xiang Hong, a victim of forced abortion, has been sent to mental hospitals nine times since she started filing complaints in 1992.

Forced mental treatment has also been used extensively on practitioners of Falun Gong, a traditional Chinese spiritual discipline. On Minghui.org, a website that documents Falun Gong persecution cases, a search for “mental hospital” yielded 7,913 results, documenting evidence of many mentally sound practitioners being sent to mental hospitals against their will.

One example is professor Wu Xiaohua, who had been practicing Falun Gong since 1994, but is now paralyzed after years of abuse in psychiatric facilities. She was institutionalized on Oct. 23, 2001, and force-fed and injected with drugs that damaged her central nervous system, according to the Sound of Hope Radio Network. The drugs caused mental confusion, and inhibited movement and reactions. While in the facility, Wu was tied up around 40 times for up to two days in a row, and was force-fed, as well as verbally and physically assaulted.

Wu pointed out multiple times to staff that it was illegal to lock up a mentally sound person in a psychiatric facility, but they rarely responded. A doctor once told her: “You are definitely not mentally ill, but the orders are from above. They told us to feed you the drugs, and they determined how much we should feed you.”

Due to various loopholes, the new legislation cannot prevent such abuses from happening again. State media People’s Daily reported that treatment can only be conducted on a voluntary basis, unless a person is considered a danger to himself or others, in which case treatment should be determined by the person’s guardian or the medical staff.

Analysts told Voice of America that how a person “endangers others” is not defined in the legislation, allowing authorities enough flexibility to make decisions that serve their own purposes.

It also fails to clarify that inpatients have the right to access and authorize representatives to appeal against guardians’ decisions. Furthermore, communication rights remain restricted, and disability-based detention and treatment still does not require consent.