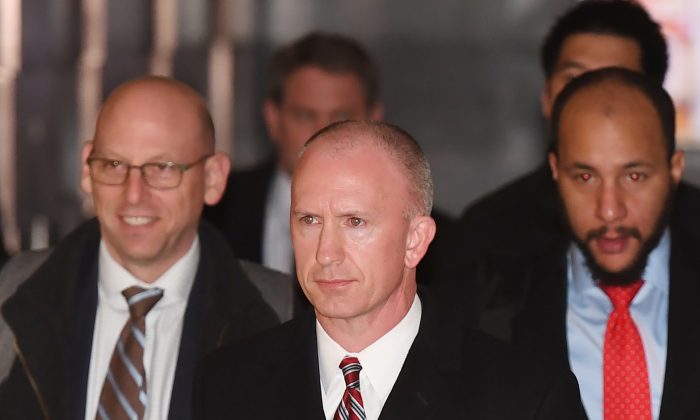 Deputy US Trade Representative Jeffrey Gerrish (C) leaves a hotel with his negotiation team for the second day of talks in Beijing on Jan. 8, 2019. (GREG BAKER/AFP/Getty Images)
US-China Relations

Is Beijing Ready to Surrender in Trade Talks?

After the much anticipated U.S.-China trade talks in Beijing on Jan. 7 to 9, Xinhua only published a very short, 109 word statement from the Ministry of Commerce of China, announcing that the United States and China have had “broad, in-depth and meticulous talks,” and that the two countries agreed to maintain constant communications.

If one only reads this statement, there is nothing to make out of it.

However, there is so much more to get from a blog article headlined “Three Telling Details During the Unusual Sino-US Talks.” Although this was only a blog article authored by someone using an alias—“Niu Tanqin” (“Bullpiano” in English, literally meaning “a piano-playing bull”), both of the Chinese Communist Party’s most important mouthpieces, Xinhua and the People’s Daily, reposted it.

The three “telling details” listed by “Bullpiano” are:

Overall, this article says that these details revealed the willingness on both sides to talk, and showed that things are changing in a positive direction.

The article says, “Some of the structural changes requested by the U.S. look like very aggressive and intimidating at first glance. However, if one thinks hard on this, those changes are exactly what we need to deepen our openness to reform.”

The outside world has speculated that the communist regime of China would resist very hard the U.S. requests for structural changes. However, the above statement, because it was reposted by the top propaganda organs, suggests that Beijing is now ready to give in on this front.

The article also applauds this round of “thorough” talks by saying, “It should have been this way (long time ago)! Just as what is well expressed in that old Chinese saying, ‘Peace and harmony bring us wealth.’”

After further praise for the “super wisdom” of two sides, the article ends with this sentence: “Amongst crises there are always opportunities. In this world, there are no obstacles that we cannot overcome, and there are no challenges that the Chinese people cannot turn into opportunities.”

For people who know how to read the Chinese Communist Party (CCP)’s propaganda and articles, the underlying message of “Bullpiano”’s article is very clear: The CCP is ready to surrender to the United States on all fronts.

However, the CCP is unwilling to openly admit that it is prepared to make big concessions to the United States. It is boxed in to some degree because of the previous high profile official propaganda that by starting a trade war with China “the U.S. is lifting rocks only to have them smash its own feet,” and that “China will win big if it is a big war; China will win medium if it is a medium-sized war; China will win small if it is a small war.”

That is why instead of having its reporters to properly report upon the trade talks, the CCP only “reposted” a blog article by an author using an alias to send some signals to the outside world. In this way it seeks to continue to brainwash the Chinese people into believing that whatever the party does, there always is a good reason for it.

And why did Beijing’s stance change so dramatically? Maybe the latest economic figures can offer some explanation.

China’s Consumer Price Index(CPI)—a gauge of prices for goods and services—rose 1.9 percent year on year in December, lower than the economists’ expectations of a 2.1 percent growth, according to a Reuters’ poll. The CPI rose 2.2 percent in November.

The Producer Price Index (PPI) in December rose 0.9 percent from a year ago, lower than the 1.6 percent economists were expecting in a Reuters poll, and the lowest since September 2016.

The lower than expected CPI and PPI meant that the prices of both industrial products and consumer commodities are decreasing. As a result, the profit level of enterprises and the employment situation will all be negatively affected.

Given the huge debts China carries, the risk of China’s economy falling into the so-called “debt deflation” circle, or “deflationary spiral” is increasing.

However, only months after the trade war started, more and more people have started to realize that the CCP’s economy, which was based on unlawfully and unfairly taking advantage of Western investments, technology, and markets, is a true “paper tiger.”

It hasn’t been built on a solid foundation to become a healthy and sustainable economy.

That’s why as soon as the United States started to try to rectify the unfair trade relations with the Communist China, the “paper tiger” nature of its economy quickly revealed itself.