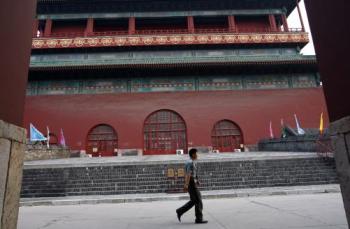 A Chinese policeman walks by the Drum Tower where an American tourist was killed August 9, 2008 in Beijing. Some believe that the Chinese Regime is attempting to spread rumors about the incident, linking it with Falun Gong. (Paula Bronstein/Getty Images)
China

Is Beijing Trying to Frame Falun Gong for American’s Murder?

The murder Saturday in Beijing of American tourist Todd Bachman, a relative of U.S. Olympic volleyball coach Hugh McCutcheon, grabbed the world’s attention just as Games were getting underway. The Chinese regime’s official media, Xinhua, was quick to dismiss the killing as the random act of a depressed man, whom they identified as Mr. Tang Yongming.

In the past few days, however, Xinhua’s reporting has changed, and internet postings have begun to appear that claim Tang committed the murder because he is a Falun Gong practitioner.

These postings have made prophetic a release issued by the Falun Dafa Information Center on August 8, the day before the murder. That release warned that the Chinese regime “may attempt to stage an incident, perhaps even one involving violence, and then label the actors as Falun Gong practitioners.”

Xinhua’s original report read, “The Police Department of Zhejiang province investigated and verified that Tang Yongming’s armed attack on Gulou, Beijing Dongcheng District was an individual act of extreme behaviour caused by his being depressed.”

But reports such as this one have been quietly taken offline. At the same time, the regime has obstructed press who have attempted to report on the murder, going so far as to confiscate the notes and photos of Chinese press who attended a press conference about the murder held by U.S. Olympic Volleyball Coach Hugh McCutcheon.

Beginning on August 11, internet postings by different internet pen names began, without giving any real evidence, to claim that the alleged murderer Tang is a Falun Gong practitioner. The postings are carefully crafted to convince a mainland Chinese audience, but might be less effective with an audience with free access to information.

For instance, one such posting claimed to quote from an article that C.I.A. Director Michael Hayden was said to have published in a blog that identified Tang as the killer. The next paragraph of the posting stated that Tang was a Falun Gong practitioner. Having the quote attributed to Hayden followed by the statement about Tang might lead readers to conclude Hayden had said Tang practiced Falun Gong.

The same posting notes that the name of Tang Yongming is found on Minghui, a Falun Gong Web site, which seems to be the only evidence offered that the alleged murderer was a practitioner. However, it is very common for Chinese to have the same name.

Another posting said he has a friend who is a Falun Gong practitioner who received a letter Tang sent before his death in Beijing from an internet bar. The letter says that Tang committed the murder/suicide because he is a practitioner and wants to achieve “consummation.”

According to Erping Zhang, spokesperson for the Falun Dafa Information Center, “The language in this post is clearly the work of a Communist Party propagandist aiming to falsely paint Falun Gong beliefs as extreme or irrational. The foundation of our faith is the principles of honesty, compassion and tolerance, and the teachings of Falun Gong expressly forbid all forms of killing.”

The Chinese Communist Party using a campaign of misinformation to target its perceived enemies is nothing new. Chinese dissidents, including democracy activists and Falun Gong practitioners, have long been the target of Chinese internet agents, who spread false articles and attack writers who are critical of the regime.

Sometimes the misinformation takes on the form of elaborately staged events. For instance, The Epoch Times reported on how the Chinese regime staged violent events in Lhasa in March that were then used to justify the violent crackdown still going on in Tibet.

In January 2001, five people were reported to have set themselves on fire on Tiananmen Square, whom the Chinese media identified as Falun Gong practitioners. The documentary “False Fire” analyzed the propaganda videos played regularly on Chinese TV at that time and demonstrated that the “immolations” were staged.

The Washington Post reported that Ms. Liu Chunling, who was said to have died in the immolation, was not known by any of her neighbors in Kaifeng to ever have practiced Falun Gong.

While the Chinese regime seems to be trying to link Tang with Falun Gong, new evidence suggests Tang was not in fact the murderer. The Epoch Times reported on Tuesday that an eyewitness saw someone other than Tang commit the murder.

The regime says Tang was a 47-year-old unemployed man from Hangzhou City in Zhejiang Province, and that he killed himself immediately after attacking the American tourists, Mr. Bachman and his wife Barbara.

According to the eyewitness, the murderer was a 30-40 year-old, tall, Chinese man in a business suit. He was said to be very quick and agile in attacking Bachman, his wife, and a Chinese tour guide with a double-edged military knife. He then fled the scene without public security officials, who were said to be within twenty feet, making any effort to stop him.

Mr. McCutcheon had told The Washington Post that the attack happened “quite quickly,” while choosing not to give other details pending a Chinese investigation. Bachman’s wife remains barely able to communicate.

In the Falun Dafa Information Center’s release on August 8, Zhang said, “Over the past nine years, the CCP has used a variety of inaccurate labels on Falun Gong. In each case, the aim has been to vilify people who practice Falun Gong, and therefore, justify the horrors these people are subject to under CCP rule.”