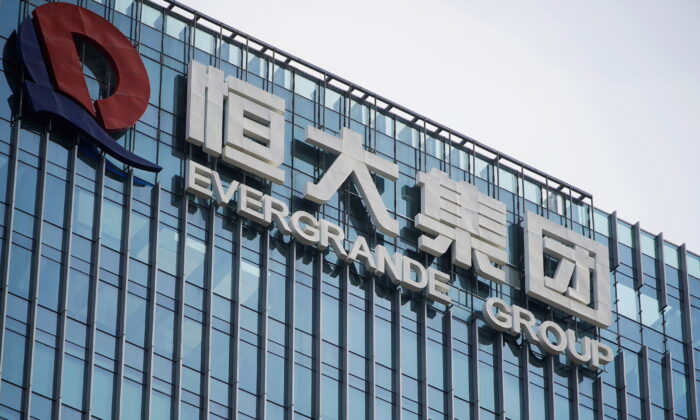 The company logo is seen on the headquarters of China Evergrande Group in Shenzhen, Guangdong Province, China, on Sept. 26, 2021. (Aly Song/Reuters)
Thinking About China

Is Beijing Finally Stepping Up to Its Financial Responsibilities?

The sudden payment by Evergrande may be the signal

Stranger things have happened, but not frequently. The huge Chinese property developer, Evergrande, after missing an $83 million interest payment on a portion of its dollar-denominated debt, suddenly sent funds to its trustee to make the payment.

This move came barely within the usual 30-day grace period for payment—just in time—in other words, to save Evergrande from being held in default. The company has also skipped payments on some $20 billion in other dollar-denominated debt, but these so far remain within the 30-day grace period.

Since Evergrande has had trouble raising funds to meet its $90 billion in interest-bearing debt obligations, much less its $300 billion in overall liabilities, the question naturally arises about where Evergrande got the money for this latest payment.

There is reason to suspect that the regime in Beijing had a hand in this matter and will continue to play a role. Given the lack of transparency in Chinese business, much less in its government, there is of course no telling for sure. But since Evergrande has had so much trouble raising funds to date, a government role seems likely. After all, the only source of funds to Evergrande so far has come from a state-owned entity, the equivalent of $1.55 billion to buy Evergrande’s stake in a commercial bank.

If the source is Beijing, it should give comfort to all concerned, for active government support is needed to keep the Evergrande’s debt problems, and potentially those of other Chinese firms, from undermining confidence in Chinese finance and so precipitating a recession in China.

The need for Beijing to act is certainly pressing. Evergrande has been a huge borrower. Its failure alone could undermine confidence in all Chinese finance by generating fears among lenders and investors that other Chinese firms will suffer with holdings of Evergrande debt, and so will have a hard time meeting their own obligations.

Inspiring still more fear is the considerable evidence that Evergrande is not alone. Other developers have already defaulted, including Fantasia Holdings Group Company and Sunshine 100 China Holding. These firms are smaller than Evergrande, but likelihoods suggest that there are still more. After all, China’s long rapid expansion must have prompted other firms to issue debt in order to take advantage of abundant opportunities that now, in a slower growth environment, will fail to return enough to support those obligations.

If the debt default problem gets much larger in this way, it will certainly undermine confidence in Chinese finance, and so impair its effectiveness. The pattern was evident in the American financial crisis of 2008-09. Widespread debt problems caused all parties involved to doubt the ability of others to meet their financial obligations. Doubts grew even about those not associated directly with failing firms. Potential lenders and investors held back out of fear that anyone seeking financing held bad debt or the debt of those otherwise weakened by holding the bad debt.

Without government support, this lack of confidence stymied lending and investing, and accordingly dragged down the economy. These kinds of risks are already evident with Evergrande’s failure. They will grow with each firm that announces financial trouble. Preventing this cascade of failure, distrust, and hardship is why Beijing must intercede. Only the government has the resources to keep the system functioning by reassuring all involved that those with whom they are dealing will likely meet their obligations.

Until now, Beijing has held back from intervening. Indeed, Premier Li Keqiang and others in his circle, including the People’s Bank of China, have taken what might be described as an insouciant pose. Perhaps that is not surprising. The Chinese Communist Party (CCP) is not as experienced in financial matters as other governments. Besides, the CCP hates to admit problems, and if it were to engage matters as needed, it would have to admit some trouble. No doubt Beijing unrealistically hopes the problems will resolve themselves. Some who otherwise recognize the risks still balk at action over concerns that bailing out failed debtors presents a moral hazard, that help now will discourage future prudence.

But, as it has become increasingly evident, Beijing does not have the luxury of neglect. The moral issues are not insignificant, but they can be dealt with in time. The need now is less to punish and assign blame than to protect confidence within Chinese finance, and in doing so protect the Chinese economy from the pitfalls of the loss of that confidence.

If this latest news indicates, however obliquely, that Beijing has at last awakened to the needs of this matter, it should encourage all. It is in no one’s interest for Chinese financial arrangements to fail, and certainly not that the Chinese economy should slow more than it has or fall into recession. Aside from the human concerns implicit in such a situation, disruption in China would certainly spread around the world. On all these bases, it is encouraging that at last Beijing seems to be moving.