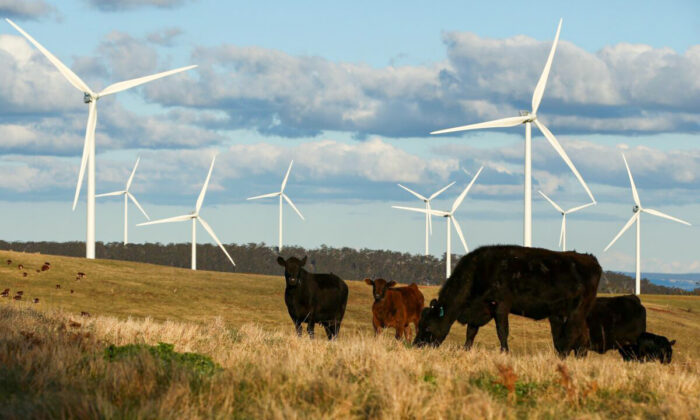 Cattle are seen in front of wind turbines at the Taralga Wind Farm in Taralga, Australia, on Aug. 31, 2015. (Photo by Mark Kolbe/Getty Images)
Viewpoints

It could not have come at a more significant cross-road for Australia’s energy industry—at the end of a month in which electricity and gas spot markets were subject to price caps, then the electricity market was suspended, reserve capacity went as low as it can practically get, and world leaders at the G7 summit began to dilute the idea that they are actually hostile to fossil fuels.

The ISP made it clear which form of energy future AEMO is betting on from the first executive summary heading “the irreversible energy transition.”

It is an intriguing choice of words. The phrase “energy transition” has become old hat, but describing it as “irreversible” is only a recent development. Where calling it inevitable would have sounded arrogant, calling it irreversible perhaps sounds resigned—“whether we want it or not, we can’t go back now, so …”

There are some senses in which “the energy transition” has already made an indelible mark on Australia’s energy landscape.

Twenty years of exponential increase in solar and wind rollout has had flow-on effects throughout the electricity industry, from the closure of coal plants to the building of diesel plants and arguably to a decrease in reliability accompanied by an increase in prices. Yet despite that, the largest portion of Australia’s energy mix is still coal power, followed by natural gas.

AEMO may consider the roadmap to be inevitable, yet it should be understood that it involves a significant launch into unchartered territory. Key elements include:

Coal Being Replaced By Storage, Not Renewables

What truly matters to secure energy supply is the “dispatchable” energy—energy supplies that can be switched on at any time.

Utility-scale storage and “coordinated DER storage” is supposed to directly displace coal-generation to keep the dispatchable portion of supply roughly even over the next thirty years.

Storage is only dispatchable, of course, until it is empty, so the total dispatchable capacity hides a reliability risk. What happens if stores run empty?

There are three requirements to mitigate this risk: One is that the storage capacity in terms of delivery rate (in GW) must be matched with ample storage depth (in GWh)—the amount a battery is emptied relative to its total capacity. The plan will lean partly on Snowy 2.0 for deep storage. As for medium-depth storage—currently, we have none in the system.

The second way to deal with reliability risk is having ample excess generation needed to top it up quickly. For this reason, there must be significant redundancy in the generation capacity, hence the next critical element.

Full Reliance on Renewables Not Realistic

Wind and solar are required to increase to nine times their current capacity over 30 years. By 2050, if all the installed capacity were ever generating all at once, we would have about seven times the normal demand.

Often South Australia, the Australian Capital Territory (ACT) or Costa Rica are sighted as proof that transition to near-total renewable generation is already possible. This is an unfair sleight-of-hand.

In the case of the ACT and Costa Rica, the main renewable is hydroelectricity which, unlike wind or solar, is a dispatchable renewable. Secondly, all three are connected to larger neighbouring electricity market regions by state interconnectors. The same energy mix would not be possible in an isolated network.

Hence, the third mitigation of under-supply is improved interconnectivity.

Interconnections will help the Australian East Coast network reduce the risk of a whole region being exposed to undersupply for a prolonged period. The integrated system plan includes the roll-out of 10,000 kilometres (6,200 miles) of new transmission infrastructure.

It is interesting to note that gas-fired or liquid-fuel (for example, diesel) generation is still part of the plan. They may be a small contributor to the total capacity, but even with the projected increase in storage, this generation is needed as part of the dispatchable capacity.

The plan also explicitly assumes that some non-electrical energy sectors, such as vehicles and domestic gas usage, will change over to electricity. In fact, some of them are expected to integrate with the system control to provide responsive demand and dispatchable energy storage. For example, your electric vehicle’s battery provides grid storage when it’s plugged in.

The broad strokes of the integrated system plan are not surprising. If we want to phase out fossil fuels, this plan is the only way we might come close to achieving it.

Not Inevitable as They Say

The plan is ambitious, but is it inevitable? Is it really irreversible? There is no physical reason why this change is inevitable; we are not about to run out of coal or gas. The only reasons why this transition would be inevitable or irreversible are social and political ones.

AEMO is expressing urgency—if we want to do this, we have to start building the infrastructure immediately. And they are right; if we are replacing coal with technology that currently doesn’t exist in the system at all, it requires immediate action. But they are relying on a lot of predictions being true at once.

How will such a large-scale rebuild of the whole system affect the electricity price, and consequently the cost of living, and Australia’s productivity and competitiveness? The answer to that is not clear.

And another important question is, will it actually happen? For that matter, is it possible? And have we really quantified the risk we’re taking if it isn’t?

The most obvious risk is that we decommission all our existing technology that is proven and replace it with the new technology needed to maintain dispatchable capacity only to find it fails.

Replacing generation capacity with storage capacity is good in theory, but the required storage volumes are staggering, and the choice of technology that may achieve it is unclear.

I understand that the new administration wants to do some kind of climate change mea culpa—tacitly accepting the accusation that Australia has been worse than everyone else in its response so far. Yet we could remove a lot of risks and have a little incremental impact on the plan if we include more redundancy using fossil fuels—the plan does not need to be so transactional (storage in, coal out).

Even if we build a power station that is never used or is decommissioned years early, the risk it reduces would be worthwhile.

Or, of course, we could go nuclear.