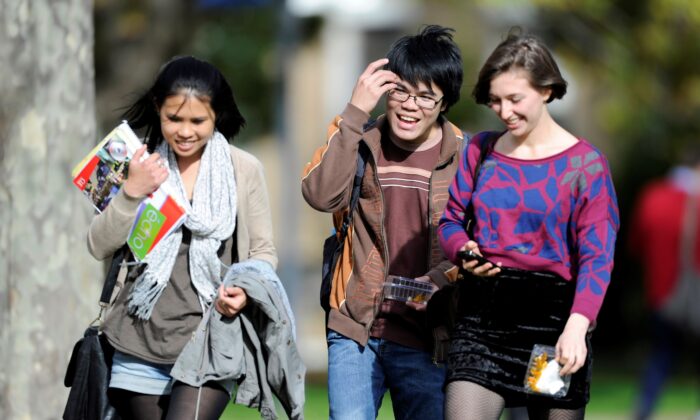 Tertiary students at the University of Melbourne in Melbourne, Australia, on May 8, 2012. (AAP Image/Julian Smith)
Viewpoints

Is ATAR Accurate Enough for Admitting Students to University?

Back in April 2021, I observed: “The sad reality is that many Australians cannot properly spell, write, or read” and that this malaise is compounded by an inability to correctly apply the rules of grammar. I also noted that “very few students are exposed to the great books of Western civilisation but instead are required to read inferior works that meet the expectations of our progressive elites.”

Many opinion pieces have been published about the declining English teaching standards in primary schools, high schools, and universities.

In a revealing essay, Barry Spurr, Australia’s first professor of poetry, talks about the “vicious circle in the teaching of English.” For him, the discernible deterioration in the mastery of the English language is caused by the poor teaching of English at university, which, in turn, results in the deficient teaching of this subject in primary schools and high schools.

Specifically, he argues that those who have studied English in school are then “further indoctrinated in its postmodern model at the university; and, in turn, many of these graduates come back to the classroom as teachers, to further propagate that learning—and so on, and on.”

How Low Do ATAR Admissions Go?

There is plenty of anecdotal evidence that Spurr’s views are not spurious. Indeed, I recently asked a good high school student whether they still have to read some of the plays of William Shakespeare. She told me that the teacher still discusses Shakespeare’s plays, but students are no longer required to read the texts.

It could be reasonably surmised that the reason for this weakening of the English language requirement lies in the difficulties associated with the reading of these plays; hence, some meaningless chatter substitutes for the real experience of enjoying the rich language of the great English bard.

What has caused this sordid state of affairs? The reality is that students are admitted to teaching courses at universities with a low Australian Tertiary Admission Rank (ATAR).

Pallavi Singhal, commenting in The Sydney Morning Herald on admission requirements for study at Australian universities in 2019, disclosed: “Far more students with ATARs in the lowest bands are being admitted into teaching degrees than other fields, with nearly 40 percent of teaching undergraduates scoring below 70.”

Of course, admission requirements vary wildly from university to university. Officially, most Australian universities require applicants to have an ATAR in the 65 to 70 band for admission to teaching courses. For example, in 2022, the University of Queensland advertised guaranteed admission into teaching degrees with an ATAR score of 76.

But the Australian Catholic University had an ATAR cut-off of 48.25 in 2019 for its bachelor of primary education course. Some education courses in Victoria even had cut-off scores of 30, which is the lowest reported ATAR a student can get.

It could be argued that the ATAR score for admission to teaching courses in universities is too low. Surely, this compares unfavourably to the more intellectually demanding systems that require scores of 96 or higher.

It should thus not be a surprise that many teaching/education students have difficulty reading or writing properly and are easily indoctrinated by lecturers, who offer their students the pathetic curriculum approved by the university’s woke brigade. In these circumstances, it is no wonder that graduates, when they return to the classroom, are ill-equipped to properly teach English to Australian cohorts of primary and high school students.

So, the cycle of ineptitude continues and becomes worse over time. This incompetence does not only manifest itself in the glaring absence of great books of literature but also in the conspicuous denigration of, or lack of concern for, the application of basic grammatical rules, including the proper use of punctuation, apostrophes, and commas, thereby eroding the lucidity with which the English language could be used to communicate with people.

Of course, there are competent teachers who genuinely endeavour to improve the English language capability of their students. For example, these teachers may seek to increase their students’ English vocabularies by familiarising them with very learned words.

Recently, I came across the use of the word “sesquipedalian,” an adjective used to qualify long-winded prose. One would be forgiven for not understanding this word, which certainly does not figure prominently in the daily vocabulary of most people. The word is reminiscent of the language used by Sir Nigel Hawthorne, better known as the fictional television character Humphrey Appleby in “Yes, Prime Minister,” or as a suitable question for $250,000 (US$170,000) in the popular Channel Nine Millionaire Hot Seat program.

Teachers may thus use difficult words to diversify and enrich their students’ English vocabulary. This is a good thing, provided it does not come at the expense of clarity in the communication of ideas.

The unfortunate situation in the teaching of English has not been assisted by people writing meaningless sentences which reasonably intelligent people cannot understand.

An example found on a blog post for the academic list H-Japan is the following sentence: “Starting with these questions, Anne McKnight will discuss Ruth Ozeki’s novel “My Year of Meat”s as a stabiliser to engage discussion about ways that relations between these localised discussions may be symptoms of something besides failure to be total or cynical paths to monumentality.”  Those who claim to understand this sentence, and can explain its meaning to other people, might well be members of a dwindling minority.

So, the message is clear: a revalidation of the teaching of English should start with an increase in the ATAR score. This will hopefully result in better-qualified teachers who are less amenable to slavishly imposing a woke curriculum on high school students.

But would an increased ATAR score and more demanding admission processes cause a decrease in the number of teaching graduates capable of servicing our schools? Undoubtedly, a consideration of this question might provide new insights into Australia’s education system.

But because of its complexity and multi-faceted aspects, it is better to leave its discussion for another time.