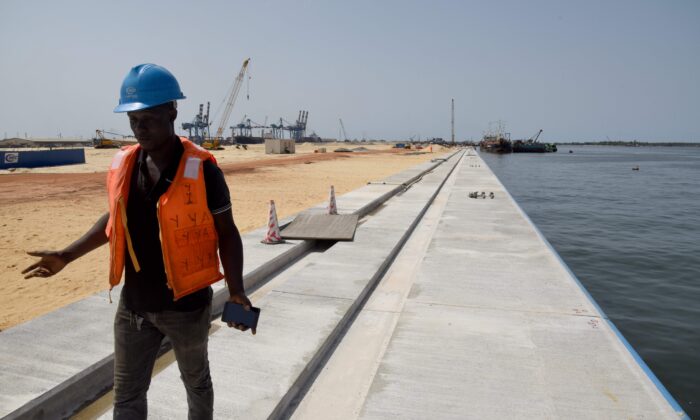 A technician works on the construction site of a new container terminal at the port of Abidjan on March 27, 2019. The modernization of Abidjan Port which started in 2012 are led by Chinese engineers and workers whose country finances up to 1,100 billion FCFA (1.67 billion euros). (Issouf Sanogo /AFP via Getty Images)
China Business & Economy

Africa Beginning to Push Back Against China’s ‘Predatory’ Strategy

Yang, the director of the Office of Foreign Affairs and a member of the Chinese Communist Party (CCP) Politburo, also made sure to criticize those who accuse the Chinese regime of taking advantage of Africa and engaging in “neocolonialism.”

“Some people who are unhappy about the growing China–Africa relations have made groundless accusations to defame and attack our cooperation,” Yang said in a speech on Dec. 22, as reported by Xinhua News, the state-controlled media outlet. “Those who attempt to undermine the traditional friendship between China and Africa will only fail.”

The Chinese regime has faced increasing criticism in recent years for its engagement with African countries. Over the past decade, Beijing has become the most important economic partner to Africa across trade, investment, financial aid, and infrastructure financing.

But the regime’s goals aren’t entirely altruistic. The belief is that Beijing ensnares developing countries into accepting expensive loans, and when incompetent leaders can’t balance the budget to repay such loans, the regime imposes heavy punishment such as asset takeovers and other concessions.

More than 10,000 Chinese-owned firms are operating in Africa, with Nigeria, Zambia, and Tanzania attracting the most attention from Chinese companies, according to a 2017 report by consultancy McKinsey & Co.

“In manufacturing, we estimate that 12 percent of Africa’s industrial production—valued at some $500 billion a year in total—is already handled by Chinese firms,” according to McKinsey. “In infrastructure, Chinese firms’ dominance is even more pronounced, and they claim nearly 50 percent of Africa’s internationally contracted construction market.”

The Chinese regime’s most visible involvement in Africa is infrastructure development. Most of the new infrastructure projects—bridges, major highways, skyscrapers, and tunnels—are financed and built by Chinese firms, which use Chinese labor and Chinese materials.

France, the United States, and the UK have faced criticism for exploiting Africa historically. Today, that role is being played by the Chinese regime.

On the surface, the regime’s infrastructure investment in Africa is to assist in development and to increase commerce. But in providing so much financing, Beijing has the future fate of the continent under its thumb. Africa is central to the regime’s “One Belt, One Road” (OBOR, also known as Belt and Road) initiative in expanding geopolitical influence, which includes access to Africa’s oil, natural resources, and strategic location.

Between 2000 and 2017, Beijing loaned more than $140 billion to African countries, according to a report by Washington-based think tank Brookings Institute. Most of that lending has been concentrated in a few resource-rich countries. By sector, lending has been focused on the important and strategic industries of transportation, power grid, and mining.

The “debt trap” narrative isn’t going away. And what’s happened recently in Zambia bolsters such criticism against the CCP.

Zambia, which has had trouble paying the debt it owes the regime, reportedly has offered major state assets as collateral. The exact amount Zambia owes Beijing is debatable—the U.S. government claims the figure could be as high as $10 billion, but Zambia, according to a December 2018 Reuters report, claims that only $3.1 billion is owed.

The real debt figure is unknown, as “much of its debt to China has not been fully accounted for, an exercise the Lusaka exchequer is not anxious to complete, for fear of the alarm the figures would cause,” Africa Confidential reported.

Zambia held talks with the CCP regarding handing over ZESCO, the state utility company, to China as payment in kind, sources told the newsletter.

“China is already in control of the country’s broadcasting company, ZNBC. There are also fears the main airport in Lusaka could be the next target.”

Attitudes regarding China’s presence amid Zambian media is highly polarized, with an increasing number of headlines critical of Beijing’s motives, as well as the quality and longevity of Chinese-led projects.

Some African countries are beginning to push back against China’s predatory strategy.

In mid-2019, Tanzania suspended plans to team up with China to construct East Africa’s biggest port in Bagamoyo, Tanzania. China Merchant Holding International was slated to be the sole port operator.

“They want us to give them a guarantee of 33 years and a lease of 99 years, and we should not question whoever comes to invest there once the port is operational. They want to take the land as their own but we have to compensate them for drilling construction of that port,” Magufuli told The Economic Times of India last year.

Beijing also demanded from Tanzanian government loss compensation during the project, as well as tax and customs duty waivers.

Tanzania’s rejection of the Chinese regime follows the cancellation of a Chinese-funded project in Sierra Leone in 2018.

A proposed $320 million airport—to be financed by Beijing—outside Sierra Leone’s capital of Freetown was scrapped in late 2018, after the country deemed the project to be uneconomical and unnecessary.