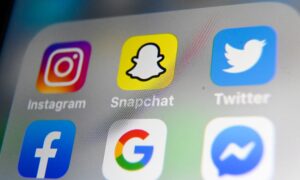 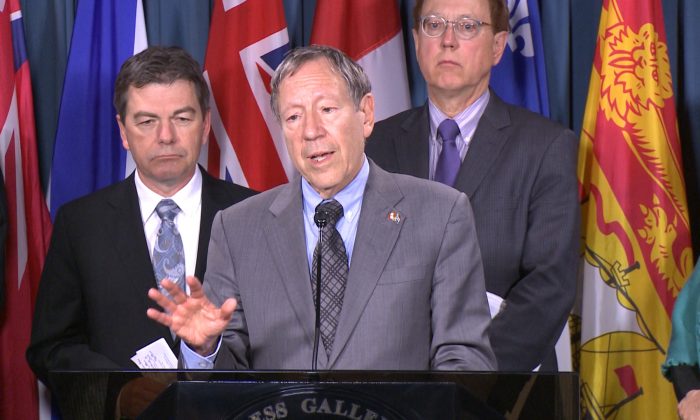 Liberal MP Irwin Cotler (C), flanked by Conservative MP David Anderson (L) and NDP MP Murray Rankin speaks during a press conference on Parliament Hill March 25, 2015. A motion by Cotler that would allow sanctions against those responsible for the detention, torture, and death in prison of Russian lawyer Sergei Magnitsky, as well as against foreign nationals responsible for human rights violations, has been unanimously adopted by the House of Commons. (NTD Television)
Canada

Introduced by Liberal MP Irwin Cotler, the motion would allow sanctions against those responsible for the detention, torture, and 2009 death in prison of Russian lawyer Sergei Magnitsky, who uncovered the largest tax fraud in Russian history.

The motion also encourages the government to explore appropriate sanctions against any foreign nationals responsible for violations of internationally recognized human rights in a foreign country, when authorities in that country are unable or unwilling to conduct an independent and objective investigation of the violations.

“The unanimous support of this motion sends a clear signal to human rights violators in Russia and around the world that they will be held to account for their crimes. By imposing sanctions, we can impose meaningful penalties on human rights violators and deter future violations,” Cotler said in a press release.

Cotler is chair of the Justice for Sergei Magnitsky Inter-Parliamentary Group, which is comprised of 21 parliamentarians from 13 countries. He has long championed a Magnitsky law in Canada, along with other MPs and senators. Magnitsky laws aim to sanction Russian officials involved in the persecution of Magnitsky.

Similar motions calling for Magnitsky sanctions have been passed by the European Parliament, the British House of Commons, the Dutch Parliament, and others.

In 2012, the United States went a step further and passed the Magnitsky Act, which imposed financial and travel restrictions on Russian officials suspected of being involved in the Magnitsky case.

But Cotler’s motion has broadened the scope to cover all human rights violators, no matter from which country.

Magnitsky’s arrest and subsequent death in custody in 2009 generated international media attention and triggered both official and unofficial inquiries into allegations of fraud, theft, and human rights violations on the part of Russian officials.

Browder has since made it his life’s mission to bring Magnitsky’s tormentors to justice, and is the driving force behind the global campaign to accomplish that. His book, “Red Notice,” is an exposé of the whitewash by Russian authorities of Magnitsky’s imprisonment and death.

Browder was present at the March 25 press conference on Parliament Hill announcing the motion, along with several MPs from all parties.

Green Party Leader Elizabeth May said Browder’s “inexhaustible efforts to commemorate the life of his lawyer and friend are laudable and instructive,” and urged the government to support Cotler’s motion.

“The tragedy of Sergei Magnitsky’s death in Russian custody and appalling posthumous show trial are stark symbols of the precipitous decline of Russian democracy,”she said in press release.

“Today’s motion is an important step in the international effort to achieve justice for Magnitsky and help to guarantee the human rights of all Russian citizens.”

Conservative Senator Raynell Andreychuk has introduced a similar motion in the Senate, which she hopes will receive strong backing from his fellow senators.

“The Sergei Magnitsky case is today recognized as a symbol of what can happen when the principles of fundamental justice and rule of law are manipulated for personal gain,” she said.

“I hope that the Senate will soon join with the House of Commons and parliaments around the world to express our commitment to accountability for foreign nationals who commit the most serious violations of human rights.”