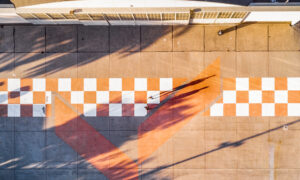 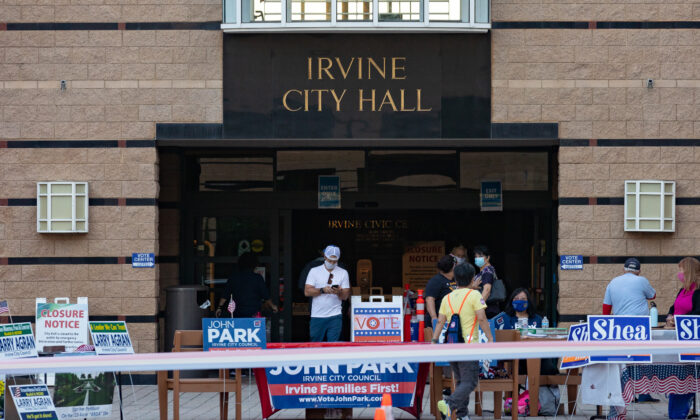 The Irvine City Council held a special meeting on the afternoon of Dec. 8 to swear in its new members. The ceremony was held virtually, after a planned drive-thru event at the Orange County Great Park was canceled due to the COVID-19 pandemic.

In the council chamber at Irvine City Hall, newly elected Mayor Farrah Khan thanked the voters of the Southern California city for “entrusting me with your vote of confidence.”

“You sent a clear message that bold leadership, diverse representation, and experience should guide this office and that of the Irvine City Council,” Khan said during the ceremony.

Khan began her term with the announcement of a COVID-19 task force, made up of local health officials, to advise the council on how to protect Irvine’s residents, support small businesses, and administer vaccines.

She also announced a new “50/50 Initiative,” which will “chart a course forward and lay the foundation for generations to come.” The name is based on Irvine’s 50th anniversary as a city, and what the city will become in the next 50 years.

Newly elected Councilman Larry Agran, a former mayor of Irvine, was first to take an oath of office at the meeting. Agran took his oath over a video call—but during the recitation, the video and audio cut out, and he had to restart minutes later.

Agran—who won his seat by 225 votes—was elected to the council for two years, instead of the usual four, because he is taking over the remainder of Mayor Khan’s former council term.

Next to take an oath was Vice Mayor Mike Carroll, who was re-elected to the council despite being embroiled in a scandal during his last term for allegedly spending public funds on personal mailers, before eventually being reprieved. Carroll’s oath was administered by his sister-in-law Lillian Vega Jacobs, a Los Angeles County judge who was appointed by Gov. Jerry Brown in 2014.

Councilmember-elect Tammy Kim was sworn in by Sukhee Kang, another former mayor of Irvine. Kim, the city’s current finance commissioner, finished first in the Nov. 3 council race, in which the top three vote-getters won seats.

Before swearing in Kim, Kang called serving on the council “a great honor bestowed upon any citizen of the city,” and entreated her to do her best “to protect the interest of the community in making any decisions for Irvine.”

“Public service is a calling, and it comes with heavy responsibility. Maintain your dignity and compassion as you embark on serving the public good,” Kang said.

The meeting began with the city’s current councilmembers voting to certify the results of the Nov. 3 general election. The pledge of allegiance was then conducted, followed by multiple Irvine faith leaders praying for the incoming mayor and councilmembers, and congratulating them on their success.

Notably absent from the ceremony were outgoing mayor Christina Shea, who lost to Khan by an 11 percent vote margin, and former councilmember Melissa Fox, who lost a race for the 68th District seat in the State Assembly on Nov. 3.