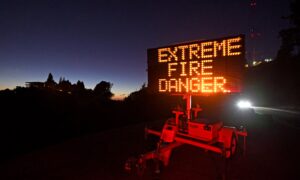 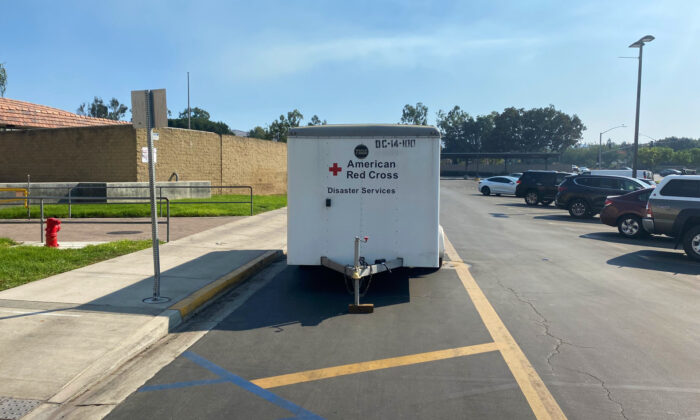 Thousands of residents of the City of Irvine in Orange County, California, have been forced to evacuate their homes under mandatory orders due to the raging Silverado Fire.

While some checked into hotels and others went to the homes of relatives, those with nowhere else to go flocked to city-run evacuation centers set up at local high schools and community facilities.

Melissa Haley, the public information officer for the City of Irvine, told The Epoch Times that the initial demand was high: as soon as the city opened an evacuation center, it filled up with people forced out of their homes.

Irvine offered the public both care and reception centers, which were open until 10 p.m., and overnight shelters located in high school gymnasiums. Both types of facilities provided food, drinks, seating areas, restrooms, and WiFi.

“All of these opened their doors with COVID restrictions in place,” Haley said.

Many evacuees observed in the overnight centers during the day on Oct. 27 were using the facilities to charge electronic devices and connect to the available WiFi.

“We started closing some centers just based on lack of interest today. Since we’ve started to repopulate the city, some folks are able to go home,” Haley said.

“We do still have some folks at a number of our centers. We have four centers open at this time.”

According to the City of Irvine website, Woodbridge High School is the only overnight center still operating. Care and reception centers at University Community Park, Quail Hill Community Center, and Rancho Senior Center were scheduled to reopen for day use at 8 a.m. on Oct. 28.

The city collaborated with a number of community partners to help mitigate the chaos resulting from the fires.

“Mariners Church had a care and reception center, and they had an In-N-Out truck available,” Haley said. “We had food donations from Edwards Lifesciences. The Vagabond Inn in Costa Mesa provided hotel rooms.”

Cox Communications provides internet service in Irvine. Company representatives went to the various care and reception centers “to make sure that folks weren’t disrupted in their internet signals or whatever that they needed to be able to either conduct business or communicate with people,” Haley said.

Many individuals and families displaced by the evacuation order had pets along with them. The community centers provided a dog sitting service, though the pets were required to remain in their crates.

“People could bring pets so long as they were in a carrier of some kind, and their owners were able to care for them at this site,” Haley said.

If not, local businesses, including the Orange County Animal Care Center, were “taking pets on an intake basis to hold them and care for them during their owner’s displacement.”

Haley said the city was grateful for the cooperation of residents following the mandatory evacuations, calling it “a scary time.” But in spite of the unknowns, people for the most part were “compliant about leaving their homes” and did not jeopardize the safety of themselves or first responders by staying behind.

“The City of Irvine continues to make their safety and well-being a top priority throughout this process,” Haley said.

“We understand it’s hard to be displaced, understand the chaos is hard … we’re actively seeking to provide them support, shelter services, whatever it is that they need during this time.”

As of Oct. 27, officials reported that the Silverado Fire was only 5 percent contained and had burned around 13,000 acres. Though several mandatory evacuation orders had been rescinded, many others remained in place and were indicated on the city’s website.

According to the Orange County Fire Authority, 70,000 Irvine homes and another 8,000 in nearby Lake Forest remained under mandatory evacuation orders on the afternoon of Oct. 27.