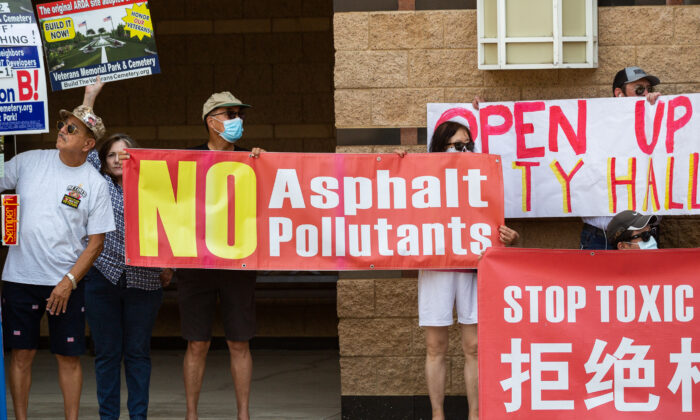 IRVINE, Calif.—A group of Irvine residents gathered outside city hall on May 25 to protest a variety of issues, including some related to an asphalt-mixing plant.

Various activist groups attended the rally, which was formed by the Stop Toxic Asphalt Pollutants (STAP) group, an Irvine-based organization seeking relief from the smell of burnt rubber. Members of the group said they’re worried about the health effects of air pollution from All American Asphalt, which is located close to Irvine neighborhoods including Orchard Hills.

Kim Konte, who is helping to lead the charge against the pollutants, said she’s tired of being ignored by the Irvine City Council about an issue that is affecting multiple neighborhoods and causing health issues.

“We are trapped in a bad movie right now,” Konte told The Epoch Times. “Our issue is really a public health crisis that some of our advisers from UCI and elsewhere have related to the Flint Michigan water crisis, where our elected officials are failing to take action on an issue that they are responsible for. They took an oath to protect public health and safety.”

The University of California–Irvine (UCI) donated air quality sensors to STAP, Konte said, who added that data later retrieved from the equipment showed the air to be contaminated.

Irvine residents impacted by the plant said they feel betrayed by Irvine Mayor Farrah Khan and Vice Mayor Tammy Kim, who Konte said campaigned on the promise that they would work to fix the issues.

“Everyone’s waiting to see if we can get something done, or people are moving this summer,” Konte said. “We’re not going to allow these toxins to impact our children’s health any longer. It’s scary to see the data that we’ve collected. … It’s data that our UCI advisers, who are experts in air sampling and volatile organic compounds, have vetted and analyzed.”

The issue goes beyond odors; Konte said some people living near the plant are getting sick with nosebleeds, headaches, stinging eyes, and burning throats. Orchard Hills is now being referred to as “Orchard Kills,” she said.

One of the main challenges relates to a policy the Irvine City Council passed last December, Konte said. The policy requires the support of two councilmembers or the mayor to place an item on the public meeting agenda.

Konte said Councilman Larry Agran, who supports fixing the issue, is stuck because he can’t get a second councilmember to support the item.

Meanwhile, Kim told The Epoch Times that she’s being unfairly attacked in the situation despite doing all she can for constituents.

“When I was elected, I did look into the issue as promised, and I realized it was very complicated and very complex,” Kim said. “What I did learn is that the city of Irvine is in a lawsuit against the asphalt company, number one. Number two, what I learned is that the city of Irvine actually has no control over anything related to the air. It only has control over zoning and whatnot, but any toxins or anything around that is [controlled by the South Coast Air Quality Management District] AQMD.”

Kim said she sent a letter to the district asking it to hold a public session on the matter, which it did in December. Despite the data she said STAP claims to have, the outcome of the meeting was inconclusive because consistent data couldn’t be shown.

When asked about the lawsuit, Kim said she wasn’t able to disclose many details, but that the city was trying to shut down the plant.

Kim said she also introduced the group to her own environmental advisory team, which consists of well-known professors and scientists in the realm of environmental sustainability. Yet, she said, the STAP group never responded to the introduction.

All American Asphalt didn’t immediately respond to a request by The Epoch Times for comment.