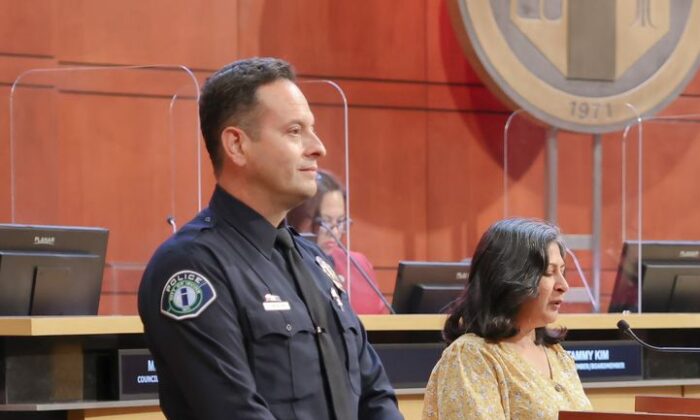 Irvine Officer Recognized as D.A.R.E. International Officer of the Year

Irvine, recently ranked the safest city of its size in America, notched another honor last week when one of its police officers was named international officer of the year by a renowned drug-abuse prevention organization.

Irvine Police Officer Alex Mendoza is the D.A.R.E.—or Drug Abuse Resistance Education—international officer of the year. Mendoza was cited for his help in educating grade-school students on drugs and crime prevention.

“I have seen the impact that you’ve had on your students, and it is an impact that lasts them a lifetime,” Mayor Farrah Khan said as she honored Mendoza during a city council meeting on Aug 9.

Mendoza has been involved with the D.A.R.E. program for 12 years and served on the Irvine Police Department for 28 years. He won recognition this year as the best in a program that has graduated more than 25,000 officers.

“If you think of the 49 countries and 50 states in which D.A.R.E. is taught, for D.A.R.E. America to go through the list of nominees and then select you to receive that award, it’s pretty special,” Mendoza told The Epoch Times.

One way Mendoza has found success in the classroom is through personalizing his experience with students. He said besides going over the basic mandatory topics such as vaping, tobacco, alcohol, or other gateway substances, he likes to focus on stress.

Topics he covers are related to overcoming peer pressure, self-acceptance, connecting with others, and respecting other people.

“If you really accept who you are, accept those imperfections and accept that as a human being we’re not perfect, then I think that’s a greater strategy to make sure you don’t go to an external source to try and complete you,” Mendoza said.

Mendoza is gratified to have had an impact on students’ lives. He recalled a time when a student saved a seat at graduation for him—a student he had taught in 6th grade and hadn’t seen since.

There were many times when previous students would recognize Mendoza and ask to snap a quick photo. After 12 years in the program, Mendoza said it’s an honor to know they still look up to him.

Mendoza has completed a lot of personal growth training as well as some life coaching. In addition, he’s taken classes on mindfulness and tai chi through the Susan Samueli Integrative Health Institute at the University of California–Irvine.

He said his biggest goal is that the D.A.R.E. program will empower students to make better life choices and to become better people with compassion for themselves and others.

D.A.R.E. was founded in 1983. The curriculum was created by an administrator with Los Angeles’ public schools in partnership with Los Angeles police officers, who were trained to teach the 17-lesson curriculum in the schools. The program expanded rapidly and spread to other countries. The program received its name upon the founding of the nonprofit D.A.R.E. America in 1989.