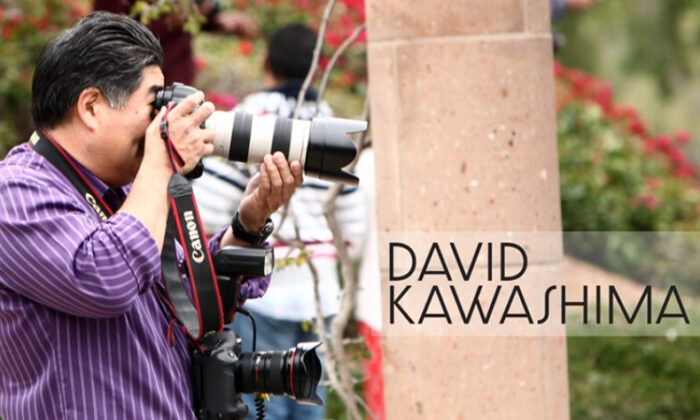 Photographer David Kawashima was honored by the city of Irvine with an art exhibition of his photographs at the Irvine Civic Center starting Sept. 16, 2021. (Courtesy of City of Irvine)
Southern California

IRVINE, Calif.—The city of Irvine is honoring its longtime city photographer David Kawashima with an art exhibition displaying his photographs at the Irvine Civic Center.

The photo exhibition opens free to the public beginning Sept. 16 with a reception held from 5 to 7 p.m. The exhibition will be on display until Nov. 24.

“We are extremely grateful to have had the privilege of knowing and working with David, and we offer our sincere condolences to all who knew and loved him.”

Kawashima passed away at the age of 62 on April 18, in a traffic accident in Tustin with a driver who was arrested on suspicion of driving under the influence in a stolen car, according to Tustin police.

In addition to the gallery, Kawashima’s name was added to the city’s Wall of Recognition at Col. Bill Barber Marine Corps Memorial Park, and a photography studio at Irvine Fine Arts Center was renamed in his honor.

“David Kawashima passed away in a tragic accident. David’s been an integral part of the Irvine community and the surrounding area for many years. And he’s documented many of our milestones and important events and celebrations,” Councilman Mike Carroll said during an April 27 council meeting.

“David was a friend to us all up here … He chronicled so much of what makes this city.”

The exhibit featuring Kawashima’s images is the latest in the city’s ongoing series of art exhibitions, dubbed as Art at City Hall, which focuses on local artists of all ages and media types.

The city of Irvine said in a statement that Kawashima was a beloved brother, son, partner, stepfather, and friend to many. He earned his Bachelor of Arts degree from the University of California–Los Angeles, and his photographs were featured in regional and nationwide publications.