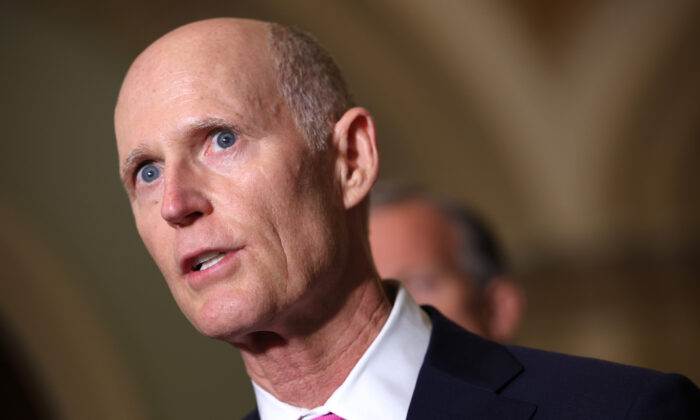 Sen. Rick Scott (R-Fla.) said during a June 1 interview that he supports states’ rights to bar “irresponsible 18-year-olds” from purchasing firearms, but he won’t support any federal restrictions.

As the governor of Florida in the wake of the Parkland High School shooting in 2018, Scott signed a bill from the GOP-controlled state Legislature raising the minimum age to buy guns from 18 to 21, though 18-year-olds were still permitted to possess firearms.

Scott said he wouldn’t want to take away an 18-year-old’s right to own a gun, but he also said people that young shouldn’t be able to purchase a firearm on their own. They need to be with their parents, he said, and they can own the gun but they can’t purchase it on their own until they’re 21.

“I’ll work with anybody to make sure no one’s gun rights are taken away, but if you’re threatening harm to yourself or somebody else, you’ve got mental illness—come on, you can’t have access to a gun,” Scott said.

At a federal level, Scott said he intends to focus more on legislation increasing school security and addressing mental illness, which Republicans have been pushing for since the school shooting in Uvalde, Texas, on May 24.

With regard to school security, Scott said it would be good to codify recommended best practices to create a “clearinghouse to tell parents what are the best practices,” so parents can compare those to the policies and procedures in their own children’s schools.

“There’s some logical things we could do, but let’s focus on—don’t take away guns—let’s focus on school safety, he said.

“But look, if you are threatening harm to somebody, including me, your kids, anybody, I mean—why do you have access to a gun? There ought to be a due process. You go through the law enforcement. It goes through the courts,” he said, seemingly referring to red flag laws, which allow a person’s firearms to be confiscated by court order if they’re deemed to be a threat to themselves or others. “It should be temporary, but there’s a way to do that.”

“We don’t want any child in this country ever to be shot again,” Scott said. “This is horrible.”

In the aftermath of the Uvalde shooting that left 19 children and two adults dead, Democrats and Republicans have wrangled over the proper federal response to the tragedy.

While Democrats have pushed for expanding gun restrictions at a federal level, Republicans such as Scott have broadly called for legislation that increases school security while preserving Second Amendment rights.

Democrats in the House of Representatives, where simple majorities alone are sufficient to pass legislation, are making a push to pass an expansive gun control bill.

Their bill, the “Protecting Our Kids” Act, would bar the sale of “any semiautomatic centerfire rifle or semi-automatic centerfire shotgun that has, or has the capacity to accept, an ammunition feeding device with a capacity exceeding 5 rounds” to anyone under the age of 21. It would also codify the Department of Justice’s 2019 bump stock ban and prohibit the possession of so-called “ghost guns,” which are privately assembled firearms that lack a commercial serial number.

However, the bill has almost no chance of making it through the evenly-divided Senate, where at least 10 Republicans and all 50 Democrats would need to support it to overcome the 60-vote filibuster threshold.

Sens. John Cornyn (R-Texas) and Chris Murphy (D-Conn.) have led negotiations seeking to find a compromise that both sides could agree to. The negotiations have the backing of Senate Minority Leader Mitch McConnell (R-Ky.), whose support could make or break a bill’s ability to pass the upper chamber.

However, despite his comments on June 1, Scott on various occasions has said that he will not support a federal expansion of gun control and that he is not interested in efforts to reach an agreement on any such legislation.