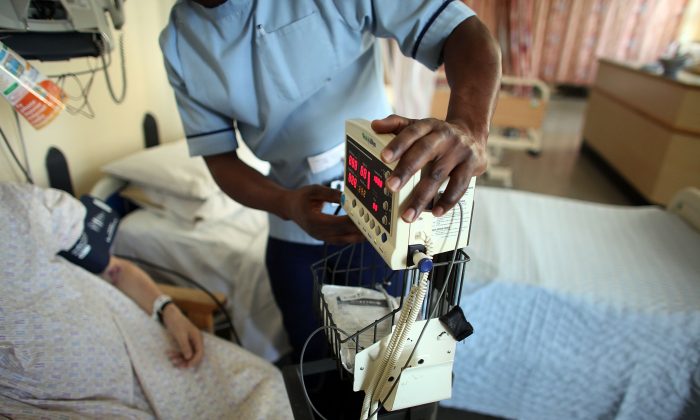 A nurse tends to recovering patients on a general ward at The Queen Elizabeth Hospital in Birmingham, England, in a file photo. (Christopher Furlong/Getty Images)
UK

Irregular Heartbeat a Factor in Excess Deaths in England and Wales: ONS

Deaths from irregular heartbeat have driven a rise in excess mortality, according to official figures.

The number of deaths registered in England and Wales from cardiac arrhythmia was above average for much of the first half of 2022, the Office of National Statistics (ONS) wrote on Tuesday.

The data overall showed that the number of deaths has been above the five-year average, with 3,848 excess deaths registered in the first half of 2022.

Other leading causes said to have contributed to excess deaths this year include ischaemic heart disease, diabetes, dementia, and Alzheimer’s disease.

Sarah Caul, head of mortality analysis at the ONS, said that across March, April, and May “we saw increases in deaths due to cardiac arrhythmias, predominantly among those aged 80 and above.”

“Further work needs to be done to understand any link between the long-term effects of COVID and increasing cardiac deaths,” she added.

The Health Advisory and Recovery Team (HART), a group of experts who are sceptical about the policy and guidance relating to the COVID-19 pandemic, has been calling for an investigation and for more data to look into myocarditis incidences after mRNA vaccination.

“Obviously, the vaccines are a concern as they cause myocarditis, and that leads to heart disorders. COVID could also lead to heart rhythm disorders. Picking those two apart isn’t too difficult,” HART spokeswoman and consultant pathologist Dr. Clare Craig told The Epoch Times.

Jamie Jenkins, former head of health analysis and labour market analysis at the ONS, told The Epoch Times by email that he has previously pointed to research on his site about issues around the NHS being unable to cope properly. For example, he said that some who have previously survived conditions may now be dying.

He added that “there are various studies I believe that link ongoing heart issues to COVID and then vaccines have also been linked to this too.”

“ONS has data on the vaccination status of individuals so this is an area they could look into. One of the challenges is knowing specifically if someone had COVID though, as for the wave since Christmas, many who had it won’t have tested for it. Without looking at it at a patient level and knowing vaccination and/or previous infection status, it’s difficult to conclude much,” added Jenkins.