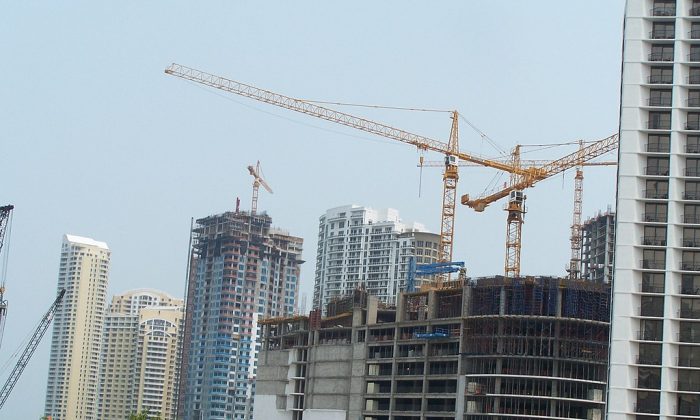 Construction cranes seen in downtown Miami taken on May 13, 2007.(Public domain)
US

Miami authorities issued an urgent warning to residents living next to construction sites.

The construction cranes are designed to withstand winds from a Category 4 hurricane, but Hurricane Irma, which is set to hit Florida later this week, is a Category 5 storm.

Miami has 20 to 25 construction cranes, Local 10 reported, but none are designed to withstand Irma’s current 180 mph winds.

People living next to constructions sites with these cranes should evacuate, authorities said. Residents of Brickell and Edgewater are especially vulnerable.

The arms of a crane are not tied down even for a hurricane and must remain loose. As a result, these cranes can collapse and damage nearby buildings.

Hurricane Irma plowed past the Dominican Republic on Thursday, Sept. 7, after devastating a string of Caribbean islands and killing at least 11 people as one of the most powerful Atlantic storms in a century took aim at Florida.

With winds of around 180 mph, the storm lashed several small islands in the northeast Caribbean, including Barbuda, St. Martin, and the British Virgin Islands, tearing down trees, flattening homes and causing widespread damage.

The eye of the hurricane passed north of Puerto Rico early Thursday, battering the U.S. territory with high winds and heavy rains and leaving nearly 70 percent of the population without electricity, Gov. Ricardo Rossello said.

Irma’s precise course remained uncertain but it would likely be downgraded to a Category 4 storm by the time it makes landfall in Florida, according to the NHC.

Irma has become a little less organized over the past few hours but the threat of a direct hurricane impact in Florida over the weekend and early next week was increasing, the NHC said.

Authorities in the Dominican Republic ordered the evacuation of towns along the northern Atlantic coast, as the storm ground toward the port and the tourist destination of Puerto Plata.

“There is a lot of wind and rain,” Puerto Plata Assistant District Attorney Juan Carlos Castro Hernandez told Reuters by telephone. “We expect things to get worse.”

At least eight people were killed on the tiny French-Dutch island of Saint Martin, with 23 others injured, and the toll was likely to rise as emergency services reached isolated communities, officials said.