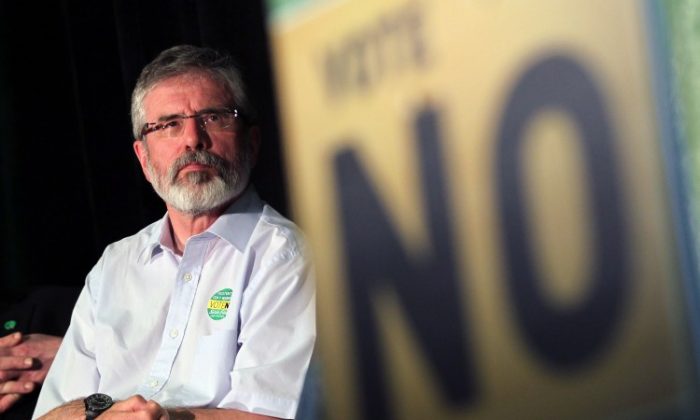 ULSTER SAYS YES, SF SAYS NO: Sinn Fein President Gerry Adams pictured during a rally for a 'No' vote in Dublin on May 28th, 2012. Ireland goes to the polls on Thursday to vote on the European fiscal treaty referendum (PETER MUHLY/AFP/GettyImages)
US

With Ireland’s vote on the Stability Treaty now just days away, indications are that a Yes vote will be carried, though some campaigners have claimed that the momentum now lies with the No side.

According to socialist/left MEP Mr Paul Murphy: “A consistent trend of the shifting of support to the No side in the last two weeks is clear. Momentum is gathering against this Treaty, as the government’s scaremongering has worn increasingly thin.

“The stage is set for a crucial last week of the campaign. Those who are currently undecided, together with the level of turnout … will determine the outcome.”

Mr Murphy said he would “be calling on people to not give the government another stick to beat them with. If this referendum is defeated, it will be a body blow to their austerity agenda and will be a very clear demand for a radical change of course.”

Taoiseach Enda Kenny appeared in a live, televised national address on Sunday night, urging voters to “send out a powerful message internationally about the kind of country Ireland is.”

In his short address, Mr Kenny said that a Yes vote would be the best way of ensuring that investment in jobs would continue and grow. He also claimed that a Yes vote would give Ireland guaranteed access to the funds of the European Stability Mechanism, should Ireland ever need another bailout, while it would also ensure that good housekeeping rules were put in place throughout Europe.

Paul Murphy MEP disputed those claims, however, referring to the speech as inaccurate and accusing the Taoiseach of lying to voters: “Enda Kenny’s speech … contained two glaring factual inaccuracies … The first is his statement that a Yes vote will give ‘guaranteed access’ to the European Stability Mechanism. This is either a conscious lie or indicates that the Taoiseach has not read the ESM Treaty.”

Mr Murphy said that “within the ESM, any country can veto another country’s access to the ESM bailout fund, whether they ratify this Austerity Treaty or not.” Referring to the purported second inaccuracy, Mr Murphy added: “the Taoiseach said that a Yes vote is ‘the best way of ensuring the strong flow of investment in jobs continues and grows’. In fact, investment has fallen by 23.4 billion euro since the start of the crisis. … People should reject the scaremongering and vote No to this Austerity Treaty,” he said.

One result of the treaty debate has been a sharp rise in popularity for Ireland’s left-wing republican party, Sinn Féin. An Irish Times/Ipsos MRBI poll, conducted last Wednesday, claims that the party’s approval rating has surged, surpassing junior coalition party Labour across the country. Labour and its leader, Eamonn Gilmore, lost ground among voters, while their partners in government, Fine Gael, maintained their position as the most popular party. Opposition party Fianna Fail also regained some of the ground lost in a disastrous election one year ago.

Sinn Féin have benefited greatly from a 1995 Irish Supreme Court ruling – the McKenna Judgement. Under this rule, the Irish government is not permitted to use taxpayer’s money to fund one side or the other in a referendum, while the state broadcaster, RTE, must allot all airtime on the subject equally to speakers from both sides. With Sinn Féin being the only major party campaigning for a No vote, the ruling has meant extensive coverage for the party on TV and radio in the run-up to the referendum.

Sinn Féin has seen its popularity boosted extensively among poorer voters, especially in the 25-34 age group, and among male voters.

However, several commentators on both sides of the border have questioned Sinn Féins track record on austerity. Fine Gael’s Director of Elections for the Stability Treaty Campaign, Minister Simon Coveney, said recently that Sinn Féin and Gerry Adams are misleading the public on both the economy and the Stability Treaty.

“The policies being discussed at this weekend’s Sinn Féin Ard Fheis underline the fact that the Party are misleading the Irish people on the economy, just like they are misleading the public on the Stability Treaty.
“In the North, Sinn Féin in Government is implementing severe cutbacks and supporting high property taxes, college fees and water charges. And yet here in the South, in opposition, they criticise everything without offering any real alternatives,” said Mr Coveney.

“While they speak about fighting austerity this weekend in Killarney, they are happy in the North to preside over social welfare rates that are about half what are paid here. We know what Sinn Féin do when they are in Government, and this exposes the fantasy economics they try to peddle in opposition,” he said.