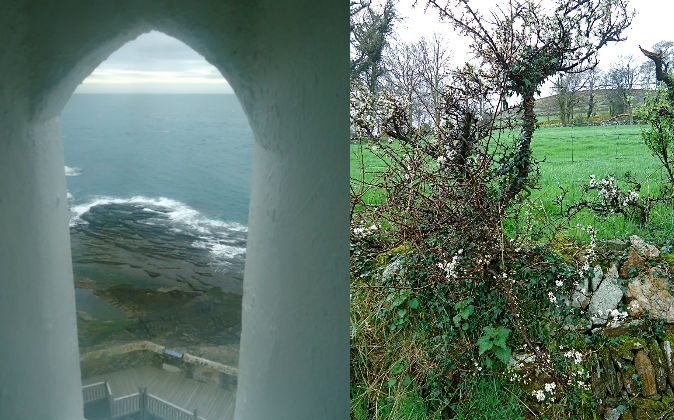 The ocean and the blackthorn fairy trees along the southeast coast of Ireland. (Susan James)
News

If there is one thing Ireland is known for it’s fairy tales and ghost stories. While tantalizing hints of small, pipe-smoking men and pots of gold are offered at the end of every rainbow, every stately mansion more than 100 years old has a resident ghost or two. I was on a week’s tour around the southeast coast of the Irish Republic and in these garden counties, ghosts and greenery seemed to go together.

Ireland’s energetic push for ecological sustainability is preserving its legendary “40 shades of green” for future generations. But underneath the bending rainbows and in between the forests, parks, and gardens, stand historic houses and ruined buildings with plenty of stories about the past to tell. From ancient corners on foggy evenings, ghosts, goblins and ghoulies still spring out of the darkness to frighten unwary visitors. Ghost-story sustainability is an old Irish tradition.

The Blackstairs Mountains on the border of County Carlow and County Wexford contain some of Ireland’s most beautiful scenery and it was here that I found Blackstairs Eco Trails run by eco-warrior Mary White. Amid fields dotted with frolicking lambs and gamboling calves, rises the misty mountain of Tomduff, a place buried in Irish folklore. Blackthorn fairy trees rise from the hedgerows and dry stone walls crisscross its fields like supernatural latticework raised by giants.

A few years back, a mining company bought mineral rights to the area and was planning to strip-mine the entire hill. Enter Mary White. She rounded up the locals and launched a campaign that saved Tomduff and the natural beauty of the countryside around it. From her home in the Old Rectory she offered to take a group of us into that countryside and show us its wonders.

We set off down what had once been a pilgrim’s path that led to sacred springs and holy wells lying hidden among the greenery. What I saw all around me was a green pastoral landscape. What Mary saw was lunch.

“Look here,” she said as she pushed back a strand of ivy to reveal blossoming wild strawberries. The greenwood, it turned out, was a pantry for those in the know. Wood sorrel, dandelion greens, pennywort, wild current, blackberries, and mushrooms, all grew in abundance, enough to feed the fairy folk and the human folk alike. Oak, ash, and beech, trees sacred to the Celts, grew everywhere.

“When you cut a tree,” Mary told us, “replace it. You’ll never see it mature but it will be a gift to the future.” But, she cautioned us, to never cut a white flowering blackthorn tree. “Blackthorn belongs to the fairies, and a broken branch in the house means a death in the family.”

Deaths in the family were all too real that night on a tour of the haunted mansion of Loftus Hall.
Built on the site of an even earlier haunted house, present day Loftus owes its elegant, but abandoned, appearance to the 4th Marquis of Ely. A man of towering ambition, he bankrupted himself creating a private palace where he planned to welcome Queen Victoria. He even added an elaborate wooden staircase built by the same brothers responsible for the Grand Staircase on the ill-fated ship Titanic.

That connection turned out to be an omen, for the queen never arrived, and the building was abandoned at the beginning of the 20th century. As English carpetbaggers deeply unpopular with the locals, the Loftus family left a legacy of wickedness behind. Briefly converted into a convent, even the good sisters, it was said, couldn’t contain the evil within the hall. On my evening tour, I was expecting lots of prearranged special effects, recorded groans, ghostly appearances, but Loftus Hall doesn’t need any help to feel genuinely creepy.

According to its legend, one dark night a shipwrecked stranger appeared on the doorstep and was offered refuge. The daughter of the house, Lady Anne, fell instantly in love but during a card game, when she bent over to pick up a card she had dropped, she discovered that the handsome stranger had cloven hoofs. He disappeared in a ball of fire and the horrified Lady Anne went mad. Locked up in the Tapestry Room for the rest of her life, her spirit is still said to haunt the place. One of our group said he is a medium, and he claimed to feel something cold and odd in the room. “You feel it too, don’t you?” he said to me.

Ruined, dark, and damp, it was hard not to feel something odd. Maybe it was the reverberations from the night before when we had stayed at the Mt. Juliet Country Estate, another historic hall but with electricity. Like Harry Potter’s Hogwarts, the house seemed to keep changing. The stairway I was sure led to my bedroom went somewhere else. The corridor to the reception desk ended in a wall.

Checking out the next morning, the clerk asked casually if I had slept well. My room, she informed me, was said to be haunted by the hall’s former mistress, Lady Juliet herself. Well-born ladies it seems dominate Ireland’s ghostly congregation.

The next day offered some anti-ghostly balm.

The ruins of a small medieval village once connected with the now-ruined Jerpoint Cistercian Abbey stand near the River Noor on the property of Jerpoint Park in County Kilkenny. In the Middle Ages, Jerpoint was a pilgrimage site with 27 houses and 14 taverns where pilgrims came to visit the Church of St. Nicholas. Here lies, according to legend, Santa Claus himself, St. Nicholas of Myra, his body brought from Turkey by the crusading Jane family and buried under a carved stone effigy.

The present owner of the property took us around and showed us the beautifully sculpted Celtic cross that had once stood in the churchyard. After an offering of tea and homemade scones eaten at the owner’s table, I was feeling superior to the supernatural.

That was before our visit to Hook Lighthouse, the oldest operating lighthouse in the world.

Perched on Hook Head at the edge of the Irish Sea, it was built in the 12th century and originally manned by local monks who were dubbed Custodians of the Light. Painted a striking black and white, Hook’s architecture is based on one of the wonders of the ancient world, the lighthouse at Alexandria. 115 steps climb to a windswept view of the rugged coastline where scuba divers were just hauling themselves out of the surf.

“Are there any shipwrecks around here?” I asked our guide, Liam.

“Only 30 or so that we know of,” he informed me. Did ghosts appear to scuba divers when they intruded on their watery graves? Liam didn’t know. But like some marine ectoplasm around the wave-washed rocks, the sea was turning from green to grey and from grey to silver. The sun drew sparks off the swells along the horizon where the ships that were the responsibility of the Custodians of the Light had once sailed.

Ireland’s ghosts didn’t need to work too hard in the town of New Ross, where the Dunbrody Famine Ship now stands moored. Nearly a million people immigrated on ships like the Dunbrody during the Great Famine of 1845-50 in conditions so appalling that 40-60 percent of them never made it to the New World. Costumed re-enactors recounted the harrowing conditions of the immigrants and the challenges that awaited them across the sea.

Re-enactors awaited us, too, at the Bishop’s Palace in nearby Waterford, home to one of Ireland’s premier products, Waterford crystal. Waterford was a Viking town later conquered by the Normans, landlords who became despised by the Irish populace. Today’s Waterford is a prosperous town where crystal tends to dominate the conversation. In the Dean’s House across from the Bishop’s Palace, an ancient wine cellar stands over Viking remains and here once again the ghosts of the past jostle each other in dimly-lit corners. Outside of the city, pastoral fields of green roll down to the sea.

There may be a history of conflict in the Emerald Isle but on the southeast coast, among the 40 shades of green, ecology and ectoplasm live happily side by side.