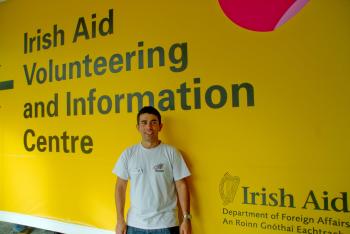 Staff from a variety of organisations gave presentations on their work, the skills they are seeking and the opportunities available. Currently there is a shortfall in skilled volunteers who are teachers, doctors, nurses, project managers and accountants, it is hoped that the fair can encourage people from these fields and others to give their time to overseas and native aid projects.

Mr Frank Flood, the manager for the Irish Aid volunteering information centre spoke to The Epoch Timesduring the event. "All twenty four of the agencies at the fair have vacancies and are also signed up with the Comhlámh Code of Good Practice for Volunteering," said Mr Flood.

The two main functions of the centre according to Mr Flood was to raise awareness of how taxpayers money is used by the government to fight poverty overseas and also to encourage people to get involved in development efforts.

Mr Flood also noted that while the government's funding was down 25 per cent it still represented a signification figure of 696 million Euro which makes Ireland the sixth largest donor per capita.

Prior to the fair, Minister of State for Overseas Aid, Peter Power said:

"I would encourage anyone interested in volunteering overseas to come to the fair and explore how they can contribute in a responsible and sustainable way. It is estimated that about 5,000 Irish volunteers go on short term placements each year.

"The government is very conscious of the need to protect the health and safety of development workers and volunteers overseas. This is why we are promoting responsible volunteering.

"I am pleased to say that the Irish overseas volunteering sector has been to the fore in promoting best practice internationally. All the participating organisations work under the Comhlámh Code of Good Practice for Volunteering.

Ms Anne Reilly from Comhlámh explained that the organisation she represented was giving advice and direction to prospective volunteers to help them make informed decisions before volunteering abroad.

“We would always stress that people thinking about going overseas do as much preparation as possible and think about their motivations and what are the realistic expectations that they hope to achieve.” Ms Reilly also recommended that volunteers look at evening courses, workshops etc that are in place to increase their information on educational issues overseas.

Comhlámh has devised a code of practice for volunteer programmes, which involves the design of the programme, training of the volunteers and support when they return home. All twenty four of the organisations at the fair have signed up for this code. “By being signatories to this code of practice … it is like a Q mark or a quality stamp to signify they are good at what they do,” concluded Ms Reilly.

Carlos Quinn a student from Trinity College Dublin (TCD) is a member of the SUAS society in TCD. Suas Educational Development which was founded in 2002 is "a movement dedicated to supporting quality education in targeted under-resourced communities," with programmes in India, Ireland and Kenya. SUAS has societies in all the main universities around Ireland and that's generally but not exclusively how they get most of their volunteers.

Mr Quinn felt that volunteering was a life changing experience because of the work and all the responsibilities that go with the challenge. “For yourself it's brilliant … you give just your time and you gain so much … it's hard to know who benefits more.”

This was the second time the centre has hosted an overseas volunteering fair. The last fair in April 2009 attracted over 400 people.