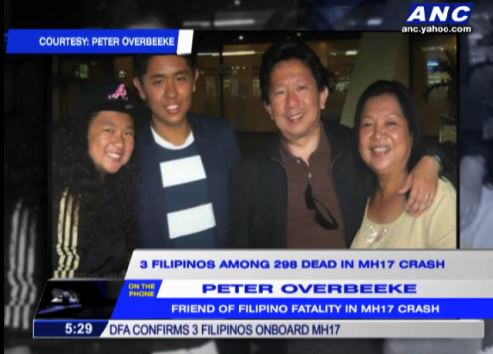 The three Filipino victims of Malaysia Airlines Flight MH17 being shot down have been identified as 54-year-old Irene Gunawan and her two children.

Sherryl Shania Gunawan, 15, and Darryl Dwight Gunawan, 20, were also on board.

Philippines officials said that it appeared the Gunawan family was living in the Netherlands.

MH17 took off from Amsterdam and was en route to Kuala Lumpur when it was shot down over eastern Ukraine near the border with Russia.

Holland resident and Gunawan family friend Peter Overbeeke told ANC that the family was planning to fly from Kuala Lumpur to Manila.

“I’m 99 percent sure that they will have an onward flight to Manila because they were having their summer vacation,” he said.

He also said that Gunawan’s husband, Bujanto Gunawan, who is an Indonesian national, was also on board the flight. He worked for Malaysia Airlines.

In this Nov. 15, 2012 photo, the Malaysia Airlines Boeing 777-200 with tail number 9M-MRD–the same aircraft that was shot down near the Ukraine Russia border on Thursday, July 17, 2014–takes off from Los Angeles International Airport. (AP Photo/JoePriesAviation.net)

People walk amongst the debris at the crash site of a passenger plane near the village of Hrabove, Ukraine, Thursday, July 17, 2014. Ukraine said a passenger plane carrying 295 people was shot down Thursday as it flew over the country, and both the government and the pro-Russia separatists fighting in the region denied any responsibility for downing the plane. (AP Photo/Dmitry Lovetsky)

ABS-CBN reported that the Gunawans were going to an annual family reunion in the Philippines and that Irene sent off a number of text messages before the plane was shot down.

For instance, she sent a text message to her sister, saying that she loved her.

Irene, who her brother Celso Pabillon said was the breadwinner of the extended family, told other relatives that she was worried about them in the wake of Typhoon Glenda and promised to send money and packages to them soon.

The Gunawan family is seeking to have the remains of the three family members brought to the Philippines.

There were 298 people on board the flight, and all are believed dead.