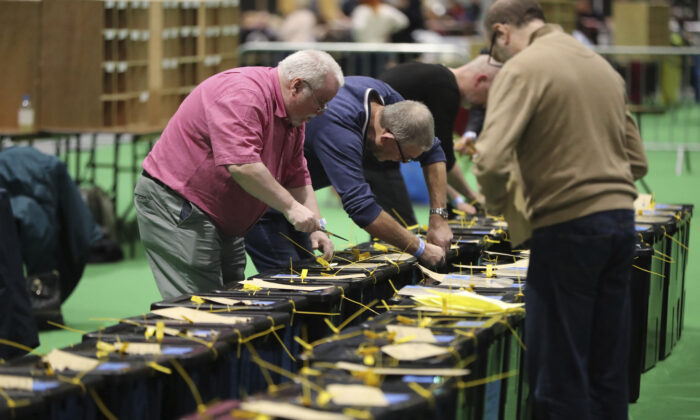 Ballot boxes are opened at the start of the Irish General Election count in Dublin, on Feb. 9, 2020. (Niall Carson/PA via AP)
Europe

DUBLIN—Irish politicians are facing messy talks over the creation of a new government as an exit poll suggests that the parliamentary election ended in a dead heat between the country’s three biggest parties.

Vote counting began Sunday with analysts forecasting that some sort of coalition government is inevitable. Full results are expected in two days.

Despite the closeness of the predicted result, Sinn Fein is in a weaker position than its two main rivals, because it fielded only 42 candidates for the 159 seats being contested in the 160-seat Parliament. Sinn Fein might be unable to find enough left-leaning allies to form a workable government.

Fine Gael and Fianna Fail, which have dominated Irish politics since independence, have shunned Sinn Fein because of its links to the Irish Republican Army, which disarmed under a peace deal.

Ireland’s system of proportional representation means that Fine Gael and Fianna Fail, which ran multiple candidates in most constituencies, are likely to pick up more seats in parliament as second preference votes are counted.

Jonathan Evershed, a postdoctoral researcher in government and politics at University College Cork, said tough political decisions are ahead.

“Both Fianna Fáil and Fine Gael have ruled out coalition with Sinn Féin, but will face major pressure now to row back from that,” he told The Associated Press. “Based on emerging numbers, there is no route to government that doesn’t involve working with Sinn Féin in one way or another.”

By Danica Kirka and Nicolae Dumitrache