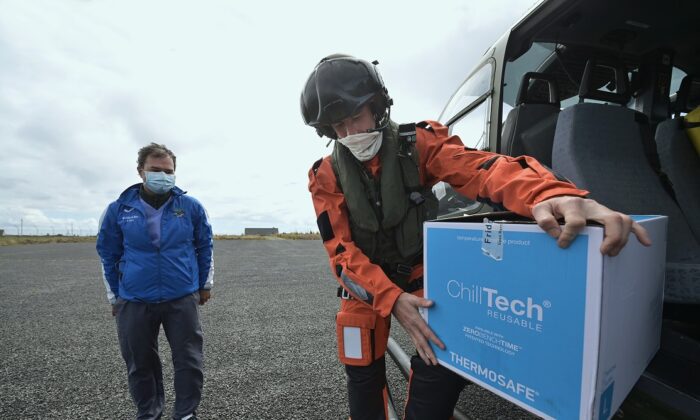 For the second month running, Ireland has been ranked No. 1 in Bloomberg’s COVID Resilience Ranking of the world’s 53 largest economies. According to the report, the country is now reopening after vaccinating more than 90 percent of its adult population.

Alongside its praise for the Emerald Isle, the Bloomberg report includes a cautionary, even contradictory note.

“With daily cases currently at their highest level since January, Ireland’s continued success will depend on widespread vaccination severing the link between easing curbs and virus spread,” the report reads.

It’s referring to the need for a nationwide vaccine booster program. But how can a country with one of the highest vaccination rates in the world currently be facing a resurgence of COVID-19 cases and deaths?

Thus far, about 7.3 million vaccine doses have been administered in Ireland. The country’s very first vaccination was given to 79-year old Annie Lynch on Dec. 29, 2020. One month later, 2 percent of the population had been vaccinated. It took until July for 50 percent of its adult population to have been fully vaccinated.

This was still far short of its goal of reaching herd immunity, which the World Health Organization (WHO) defines as: “Protection from an infectious disease that happens when a population is immune either through vaccination or immunity developed through previous infection.”

The WHO’s preference is for immunity through vaccination, and this has become the accepted view in most Western countries, with vaccination certificates being demanded rather than proof of natural immunity gained through having had the virus, which the Centers for Disease Control and Prevention (CDC) estimates now accounts for more than a quarter of the U.S. population.

COVID-19 cases also surged in Israel this summer, which likewise has a highly vaccinated population. Its Ministry of Health has reported that just 1 percent of new cases had previously been infected with COVID-19. That is, the vast majority of the other 99 percent were relying on vaccine protection that failed them.

The data suggest that the recovered have better protection than people who were vaccinated,” said Dvir Aran, a scientist at the Israel Institute of Technology.

As to exactly what percentage of people need to be vaccinated to achieve “unnatural” herd immunity, the WHO claims that it “varies with each disease.” For measles, it suggests 95 percent and for polio 80 percent, but it admits that for COVID-19, that number isn’t known other than that it would involve, “a substantial proportion of the population.”

Dr. Colm Henry, Ireland’s chief clinical officer, believes that the figure for the original COVID-19 virus was 60 percent, but, due to the arrival of the Delta variant, he claims that “the estimate has gone up to 85-90 percent.” And, as he’s referring to Ireland’s total population, it means that the country’s young children also will have to be vaccinated.

Henry said this could pose risks, and he argued that a balance would need to be considered between “what is a very low risk” to children from being infected by the virus “against any risks the vaccine may have in younger age groups.”

Worldometers lists Ireland’s total death rate on Jan. 1 at 2,248. By Oct. 25, an extra 3,188 fatalities had raised that total up to 5,436—around a 60 percent increase from 2020. Most of those fatalities occurred in January and February, prior to the country’s mass vaccination program taking off. This was then followed by a steep decline, suggesting that the program was initially successful.

However, since July, its fatality numbers have begun to rise again, and this has continued exponentially. The CDC now acknowledges that vaccine protection drops with time.

“The marked pronounced change in vaccine effectiveness is likely due to the emergence of the Delta variant as the dominant variant, and the waning of vaccine immunity over time,” said Paul Alexander, a former Trump administration COVID-19 adviser.

The Delta variant was identified in India in October 2020, and the WHO has now listed thousands of mutations of COVID-19. The first it classified to be Very High Risk was found in South Africa in May 2020. Others were then identified in London in September 2020 and Brazil in November 2020. A second London variant was found in January, and others appeared in Peru in August 2020 and Columbia in January.

Yet, the idea that coronaviruses have the capacity to mutate so quickly has been challenged by Eoghan De Barra, a consultant in infectious diseases at Beaumont hospital in Dublin, who claimed that COVID-19 actually takes a very long time to change.

His bombshell view is also supported by Dr. Sucharit Bhakdi, founder of the virology department at the University of Mainz in Germany, who explained in June 2020 that the genes in coronaviruses are more closely bonded together than in flu viruses, which makes it harder for them to mutate and easier for the body’s immune system to recognize.

Now, Ireland’s National Immunization Advisory Committee (NIAC) has advised its government to not include health care workers in its COVID-19 booster rollout. De Bara explained this decision to the Irish Times: “Most health care workers have adequate immune systems, and it is unlikely they will need serial boosters, as COVID doesn’t change at the same rate that flu does.”

This was a complete reversal of the government’s previous policy in January, suggesting it’s undergoing a major rethink. Out of the first 94,000 vaccines that were administered, 71,000 (76 percent) were prioritized for those very same health care workers, over the elderly who were most at risk of dying from the disease.

The Irish government’s vaccine booster program is being made available for all who are over 60 years old—unless, it appears, they’re frontline health care workers. This will now begin in January or February of 2022, as this third vaccine dose is understood to be most effective when administered five to six months after receiving the second one.

And the biggest take-up of vaccines in Ireland, particularly the second dose, took place during the months of July and August, which were the very same months that fatalities began to rise again in Ireland.

Could there be a correlation between those two events?