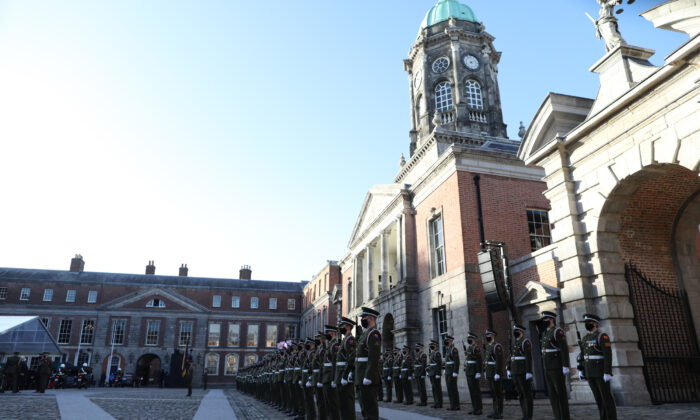 Handout photo of an Irish Defence Forces guard of honour during a ceremony to mark 100 years since the handover of Dublin Castle, on Jan. 16, 2022. (PA)
Ireland

Ireland on Sunday marked 100 years since the handover of Dublin Castle by British forces, in a ceremony attended by Irish and UK dignitaries.

At a ceremony in Dublin Castle, in the center of the capital, the Republic of Ireland marked the centenary of the deeply symbolic event.

The transfer of power in Dublin Castle, the seat of British power in Ireland for centuries, came following the signing of the Anglo-Irish Treaty in 1921.

The actual handover of power to the Irish Provisional Government 100 years ago was a low-key, hurried affair that was the culmination of years of war and revolution in Ireland.

It also came following the partition of the island and the creation of Northern Ireland in 1921.

President Michael D Higgins and Taoiseach Micheal Martin, as well as Tanaiste Leo Varadkar, were among those in attendance on Sunday.

President Higgins was greeted by a Defence Forces guard of honour as he arrived.

The event, which was held at the same time as the events of 100 years ago, was also attended by UK Ambassador in Ireland Paul Johnston.

Ireland is coming towards of the end of a so-called “decade of centenaries”, which have seen the events leading up to Irish independence remembered and publicly discussed.

In the months to come, Ireland will also remember the civil war, which was sparked by divisions over the contents of the Anglo-Irish Treaty.

The event saw a narrated account of the transfer of power read by actor Phelim Drew.

As part of the ceremony, President Higgins unveiled a plaque to mark the occasion in 1922.

On Sunday, in a short address shortly before the Irish tricolour was hoisted in Dublin Castle, Mr Martin said: “As we honour the achievements of the revolutionary generation, we do so with pride that the state they helped to create is entering its second century of independent, democratic government.”