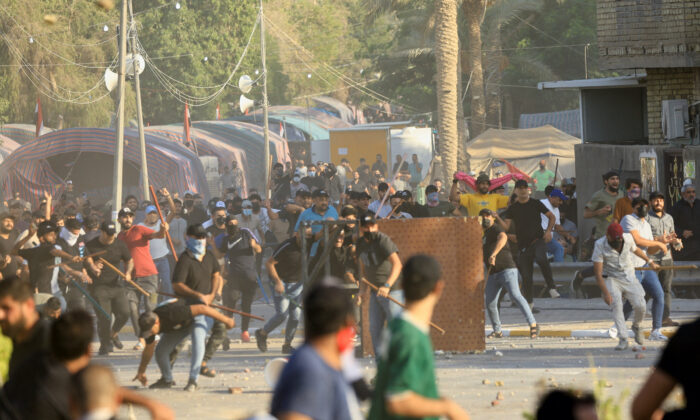 Supporters of Iraqi populist leader Moqtada al-Sadr clash with supporters of the Coordination Framework, a group of Shi'ite parties, at the Green Zone in Baghdad, Iraq, on Aug. 29, 2022. (Thaier Al-Sudani/Reuters)
Middle East

A video uploaded on Monday appeared to show U.S. Embassy staff in Baghdad being evacuated via military helicopter. However, the White House denied those reports during a news briefing on Monday.

“There’s no evacuation going on at the embassy and no indication that’s going to be required at this time,” National Security Council spokesman John Kirby told reporters.

Young men loyal to Sadr charged the government headquarters in Baghdad’s secure Green Zone, once a palace of dictator Saddam Hussein, and took to the streets outside the area where they skirmished with supporters of rival Tehran-backed groups. In addition to the five people killed, several dozen were injured, police and medical workers said, according to The Associated Press.

On Monday, Iraq’s military declared a nationwide curfew and urged the protesters to leave the Green Zone. However, photos and videos uploaded online show that some demonstrators have remained in the Green Zone, with some using the presidential palace’s swimming pool.

Sadr, who has drawn broad support by opposing both U.S. and Iranian influence on Iraqi politics, was the biggest winner from an October election but withdrew all his lawmakers from parliament in June after he failed to form a government that excluded his rivals, mostly Tehran-backed Shi’ite parties.

Sadr has insisted on early elections and the dissolution of parliament. He says no politician who has been in power since the U.S. invasion in 2003 can hold office.

Last week, the U.S. Embassy in Iraq urged calm among all parties amid concerns of an escalating conflict.

“We are closely monitoring reports of unrest in Baghdad today at the Supreme Judicial Council,” the embassy said in a statement.

“We urge all parties to remain calm, abstain from violence, and resolve any political differences through a peaceful process guided by the Iraqi constitution. We also call for those demonstrating to respect the proceedings and property of Iraq’s governmental institutions which belong to and serve the Iraqi people,” it added.

The Iraqi unrest comes one year after the U.S. military pulled out of Afghanistan after 20 years, leading to the Taliban’s swift takeover of the country.

Later in 2021, the United States formally ended its combat mission in Iraq, leaving about 2,500 troops in the country to serve as advisors and trainers. But in nearby Syria, the United States maintains some troops, who last week carried out a counterattack on reported Iran-backed militia groups near Deir ez-Zor.