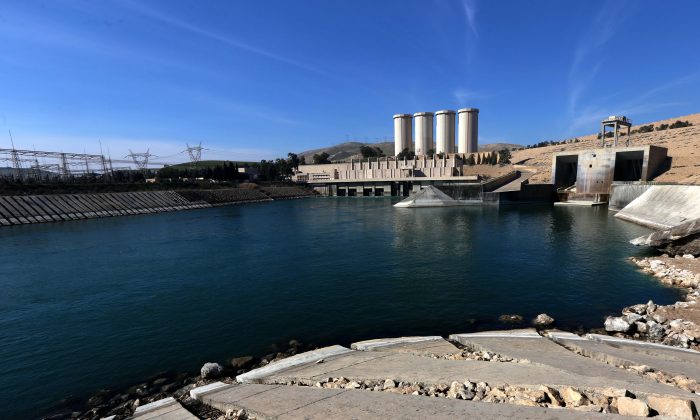 The Mosul Dam on the Tigris River, near Mosul, Iraq, on Feb. 1, 2016. The United States is monitoring Iraq's largest dam for signs of further deterioration that could point to an impending catastrophic collapse. (Safin Hamed/AFP/Getty Images)
Middle East

Nobody can predict what the forces of Mother Nature will do. Therein lies the problem for those anxiously watching and waiting to see how the Mosul Dam in Iraq holds up against spring rains, melting snow caps, and the rising level of the Tigris River and its tributaries.

Mosul Dam is considered by global experts to be one of the most dangerous dams in the world. Now it appears to be in imminent danger of collapsing if the reservoir level behind it, which is now at about 50 percent capacity, gets too high.

The resulting loss of life would be so catastrophic that conservative estimates put the potential death toll at 500,000 people.

Problems From the Beginning

The 30-year-old dam in the north of the country—just a few miles from the ISIS-held city of Mosul—has an already complex history made even murkier by war and steady structural deterioration.

From the start of the dam’s construction in the mid-’80s, there was a serious leakage problem brought on by a poor geologic foundation and faulty engineering plans.

No solution to the leakage problem (seeping water eating away at the dam from underneath) was found, according to Nadhir al-Ansari, an Iraqi professor and expert in water resources engineering. Ansari served as a consultant to the Iraqi government during the dam’s construction in 1984. He has returned to the dam countless times since then.

“Nothing worked, they couldn’t stop the seepage,” said Ansari by phone this week from Lulea University of Technology in Sweden, where he is now a professor in the department of civil, environmental and natural resources engineering. The final solution was near-constant grouting. “Just to keep the seepage constant, not stop it.”

10 Years On, Iraq Scarred From Attack on Shiite Shrine

Iraq to Shrink Paramilitary Forces Due to Shortage of Funds

The dam is built on a foundation of a soft mineral called gypsum, which dissolves with water seepage, leading to destabilization. Mosul Dam has been maintained with a 24-hour-a-day-7-day-a-week grouting process of pumping cement slurry into boreholes under pressure to fill cavities as they develop.

The process was working until ISIS took control of the dam in 2014. The skilled maintenance workers scattered. Maintenance ceased for months until the dam was recaptured and new workers could be brought in.

A U.S. Department of State official commented that the American government has been “concerned about the structural integrity” of the dam since it was retaken by Iraqi and Kurdish forces in 2014.

The U.S. Army Corps of Engineers has extensively studied Mosul Dam, and in 2007 official report sounded the alarm over the unstable and highly soluble geologic foundation.

A new report based on a current assessment of the dam was published in 2016, though it has not been released publicly. However, damning portions of it were released in an Iraqi Parliament document. A copy of that has been broadly obtained by global media outlets, including the Epoch Times.

The excerpts from the newest Corps of Engineers report show that the probability of a dam breach and the resulting loss of life are near the highest possible end of the spectrum. It also shows that since Mosul Dam was recaptured from ISIS and the interrupted maintenance program was resumed, there are “significant signs of distress and potential failure progression.”

The report also states that the interrupted maintenance has “resulted in an unprecedented level of untreated voids in the foundation.” In laymen’s terms, the volume of gaps in the dam caused by erosion from the foundation have increased at an exponential level in the past year. It is so far gone that there might not be a way to recover from the damage.

Plans are in the works to make the necessary repairs on Mosul Dam, though it is a race against time as spring brings increased water levels. Compounding an already dicey situation, one of two outlets that releases excess water has been jammed since 2013.

The jammed outlet gate is the reason why the reservoir isn’t simply drained to avoid potential catastrophe.

“There are only two bottom outlet gates,” said Ansari. “One of them is stuck, jammed since 2013. If one of the gates is closed, the other one cannot discharge that much water alone.”

If the expectations of plenty of water during March and April are fulfilled and flooding follows, the reservoir could fill faster than the outlet is able to release the water—and the pressure on the failing dam could be too much.

There is a historic precedent for the scenario. According to Ansari, in the 1980s one of the tributaries of the Tigris River flooded, but both dam gates were working, the water passed, and nothing happened. But this time, if the gate isn’t fixed, “they are not going to be able to get rid of the excess water.”

An Italian company called the TREVI Group has been tasked with the urgent maintenance needs of the structure and could begin work there as early as March.

The United States has also provided technical equipment and personnel to help monitor the dam, including a military presence at the still vulnerable location. ISIS controls Mosul city just a few miles to the south.

The need for a strong military presence at the dam is undisputed, and security concerns are a large part of why more firsthand reports aren’t getting out.

Florian Neuhof, a freelance journalist based in Iraqi Kurdistan, visited the dam on Feb. 11 for a story he wrote for The National and counted eight U.S. military helicopters at the time. But Neuhof, who has been based in Iraq for the past 10 months, said despite the efforts to avert disaster, he “wouldn’t be surprised if it goes.”

Part of the problem: the Iraqi government.

In a Feb. 7 statement from the Iraqi Ministry of Water Resources Management, the head of that agency described Mosul Dam’s condition as “good.”

“There is no problem in the dam that could lead to its collapse,” stated Minister Mohsen al-Shammari.

The Iraqi government’s practice of disinformation over the dam’s potential collapse is just part and parcel with politics in the region, according to Neuhof.

“These guys are just corrupt and incompetent and they stick their heads in the sand,” he said by phone from Iraq. Neuhof points to the lack of a contingency plan of any kind (though the government claims to have one) that would go into effect were the dam to break.

“People need to know which way to go and where to drive,” he said. “Mosul would go within a few hours. They don’t know where to go. Water would go down onto Samarra and Tikrit.”

In fact, if Mosul Dam fails, the water would reach as far as Baghdad, about 300 miles to the south. The path of destruction that would follow in its wake could include the leveling of numerous cities, mountains of debris, and hundreds of thousands of dead bodies.

For now, Ansari believes that the uncertainty is the most daunting thing for people living downstream from the dam.

“Almost every day I get tens of emails from people who are friends and even people I don’t know asking me ‘Where should we go, what should we do?'” He said he simply doesn’t know what to tell them, except to plan for the worst.

According to Ansari, if Mosul Dam fails, “It will be a catastrophe.”