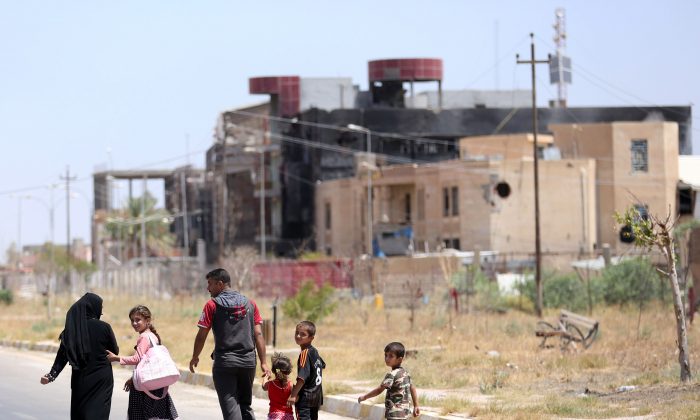 A displaced family walks towards their home in Tikrit, 80 miles (130 kilometers) north of Baghdad, Iraq. Civilians are trickling back into Saddam Hussein’s hometown as they look to start anew, the consequences of a year under Islamic State rule conspicuously written on its charred buildings and damaged homes.(AP/ Hadi Mizban)
Middle East

TIKRIT, Iraq—Abdel Mowgood Hassan climbs over toppled bricks and a torn-away front door to enter his uncle’s house in Tikrit, the first of his relatives to make a cautious return home since Islamic State militants were driven out.

He is one in a trickle of civilians to return to Saddam Hussein’s hometown in recent days after Iraqi forces and allied militias captured the city in April from the Islamic State group. But while police now patrol the streets, its Sunni civilians are worried about the future, apprehensive about the Shiite militias that liberated Tikrit and fearful the Islamic State group could come back.

U.S.-trained Iraqi police officers look over identification papers for all those returning to Tikrit, 130 kilometers (80 miles) north of Baghdad, wanting to stop the extremists from infiltrating this city on the banks of the Tigris River. Occasionally, loud explosions still echo through Tikrit’s largely empty streets, as officers detonate roadside bombs and explosives left behind by the militants after their nearly 10-month occupation. Cleaners in orange jumpsuits sweep away debris as workers try to restore water and power.

Iraqi forces, backed by Sunni fighters, Iranian-advised Shiite militias and U.S.-led airstrikes, retook the city on April 1. Tikrit’s capture marked Iraq’s biggest victory yet against the Islamic State group, which holds about a third of Iraq and neighboring Syria in its self-declared caliphate.

The military later handed control of the city to a provincial police force, in a model it hopes to emulate in liberated areas across the country. It aims to have 13 police regiments patrolling cities and towns in the rest of Salahuddin province once the extremists have been driven out.

However, authorities acknowledge these police officers will more resemble a paramilitary force.

In a brightly colored Ramadan tent at Tikrit’s outskirts, men, women and children endure exhaustive bureaucracy and searches by heavily armed police. Some are coming home for the first time in a year. Many return as they fled — with only the clothes on their backs.

“We were afraid to leave and now we are afraid to return,” says Samia Khadiyah, who took shelter in the tent with her three children while her husband completed their paperwork. “We don’t know who to fear and who to trust anymore.”

A military intelligence officer nearby, speaking on condition of anonymity as he’s not authorized to brief journalists, says police arrested 11 people trying to enter the city in recent days on suspicion of being Islamic State militants, without elaborating.

Once inside Tikrit, those returning find the extent of damage varying widely from one building to the next. Some have an occasional bullet hole, while others are in ruins, like the charred remnants of the provincial government’s headquarters. Some homes remain laced with explosives, a last-minute effort by fleeing Islamic State militants to slow the Iraqi advance.

But perhaps more worrying for the Sunni residents returning is some of the new graffiti covering up what was left by the Islamic State group.

In a neighborhood near the Tikrit police headquarters, graffiti in Farsi reads: “Conquerors be victorious; Peace be upon the martyrs and Imam Khomeini,” a reference to Iran’s late supreme leader. The Iraqi government says only Iraqi forces fought in Tikrit. However, a number of Iranian military advisers, including Gen. Qassem Soleimani, the leader of the elite Quds force of Iran’s Revolutionary Guards, were on hand for the fight. They worked with the Iraqi military and the Popular Mobilization Forces, a fighting force made up predominantly of Shiite militias.

Iraq’s Sunnis long have complained of discrimination and abuse since the 2003 U.S.-led invasion that toppled Saddam’s Sunni-led dictatorship and replaced it with a government dominated by the country’s Shiite majority. Disenchanted Sunnis and members of Saddam’s former government are believed to have helped speed the Islamic State group’s advance last year.

Rights groups have complained about abuses committed by Shiite militias and some Tikrit residents suggested those militias may have looted their homes.

The Islamic State group “never entered our homes except when they needed to arrest someone,” says Bayda Anwar Shail, who found her home badly ransacked. “It’s the Popular Mobilization Forces. They open our homes and go through our things with no respect.”

However, Hassan says many are to blame.

“It’s not only the Popular Mobilization Forces,” he says. “Even our own people, the police, are raiding the homes.”

“My house is also badly damaged and at least two of the houses on this street were looted,” Hassan adds. “But Tikrit is my home and I couldn’t stay away any longer.”

Going through his uncle Hajji Ahmed’s house, Hassan carefully steps around broken glass, random clothing and books scattered around the living room. But laying there, undamaged, is a white T-shirt bearing the smiling image of Saddam.

The Arabic script on it offers a once-popular phrase from the days of his rule, a remnant of a very different Iraq that, for many, seems so long ago: “If Saddam Says, Iraq Says.”