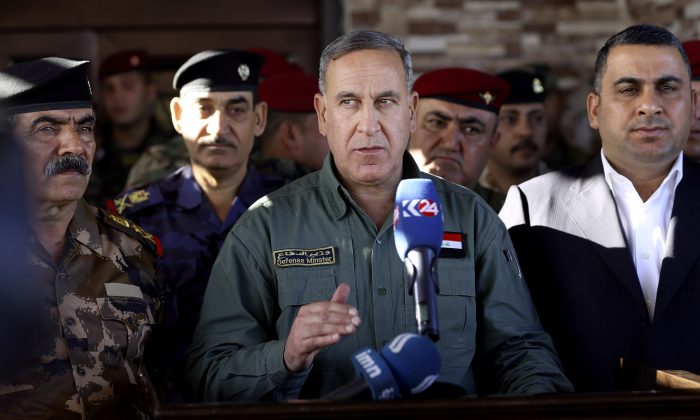 Iraqi Defense Minister Khaled al-Obeidi (C) speaks to reporters at a military a base outside Tikrit, 80 miles north of Baghdad, Iraq, on March 9, 2016. Al-Obeidi played down fears of the Islamic State’s chemical weapons capabilities, saying the group lacks “chemical capabilities.” The attacks the group has carried were only intended to “hurt the morale of our fighters,” as they have so far not caused any casualties he said. (AP Photo/Hadi Mizban)
Middle East

The Obama administration launched the new strategy in December, deploying a commando force to Iraq that it said would be dedicated to capturing and killing ISIS leaders in clandestine operations, as well as generating intelligence leading to more raids.

U.S. officials said last week that the expeditionary team had captured an ISIS leader but had refused to identify him, saying only that he had been held for two or three weeks and was being questioned.

Two Iraqi intelligence officials identified the man as Sleiman Daoud al-Afari, who worked for Saddam Hussein’s now-dissolved Military Industrialization Authority where he specialized in chemical and biological weapons. They said al-Afari, who is about 50 years old, heads ISIS’s recently established branch for the research and development of chemical weapons.

He was captured in a raid near the northern Iraqi town of Tal Afar, the officials said. They would not give further details. In Washington, U.S. officials confirmed al-Afari’s identity.

The officials, who both have first-hand knowledge of the individual and of the ISIS chemical program, spoke on condition of anonymity as they are not authorized to talk to the media. No confirmation was available from U.S. officials.

A U.S. official said Wednesday that one or more follow-up airstrikes were conducted against suspected ISIS chemical facilities in northern Iraq in recent days. The official, who spoke on condition of anonymity to discuss intelligence-related operations, was unfamiliar with details of the airstrikes but indicated that they did not fully eliminate ISIS’s suspected chemical threat.

The U.S.-led coalition began targeting ISIS’s chemical weapons infrastructure with airstrikes and special operations raids over the past two months, the Iraqi intelligence officials and a Western security official in Baghdad told the AP.

Airstrikes are targeting laboratories and equipment, and further special forces raids targeting chemical weapons experts are planned, the intelligence officials said. They and the Western official also spoke on condition of anonymity because they were not authorized to talk to the media.

ISIS has been making a determined effort to develop chemical weapons, Iraqi and American officials have said. The militant group, which emerged out of al-Qaida in Iraq, is believed to have set up a special unit for chemical weapons research, made up of Iraqi scientists from the Saddam-era weapons program as well as foreign experts.

Still, ISIS’s progress in developing chemical weapons has been limited. It is believed to have created limited amounts of mustard gas. Tests confirmed mustard gas was used in a town in Syria when ISIS was launching attacks there in August 2015. Other unverified reports in both Iraq and Syria accuse IS of using chemical agents on the battlefield.

Pentagon spokesman Navy Capt. Jeff Davis said ISIS has repeatedly used “sulfur mustard” as a weapon in Iraq and Syria. He said the sulfur mustard has been used in a powder form in projectiles such as artillery shells that when detonated create a dust cloud that “can primarily aggravate but in large doses can absolutely kill.”

Afghan President: ISIS Being Wiped Out in Afghanistan

But so far, experts say, the extremist group appears incapable of launching a large-scale chemical weapons’ attack, which requires not only expertise, but also the proper equipment, materials and a supply-chain to produce enough of the chemical agent to pose a significant threat.

“More than a symbolic attack seems to me to be beyond the grasp of ISIS,” said Dan Kaszeta, a former U.S. Army chemical officer and Department of Homeland Security expert who is now a private consultant. “Furthermore, the chemicals we are talking about are principally chlorine and sulfur mustard, both of which are actually quite poor weapons by modern standards.”

Speaking to reporters from a base outside the city of Tikrit, Iraq’s defense minister played down fears of ISIS’s chemical weapons capabilities, saying the group lacks “chemical capabilities.”

The attacks the group has carried out, Khaled al-Obaidi continued, were only intended to “hurt the morale of our fighters,” as they have so far not caused any casualties.

The United States has been leading a coalition waging airstrikes against ISIS in Iraq and Syria for more than a year. The campaign has been key to backing Iraqi and Kurdish forces that have slowly retaken significant parts of the territory the militants had seized.

But after coming under pressure at home for greater action against the militants, the Obama administration moved to the tactic of stepped-up commando operations on the ground.

Last year, U.S. special forces killed a key ISIS leader and captured his wife in a raid in Syria, but the new force in Iraq was intended as a more dedicated deployment. American officials have been deeply secretive about the operation. Its size is unknown, thought it may be fewer than 100 troops.

“This is a no-kidding force that will be doing important things,” was about all Defense Secretary Ash Carter would say about the force in testimony to the Senate Armed Services Committee in December.