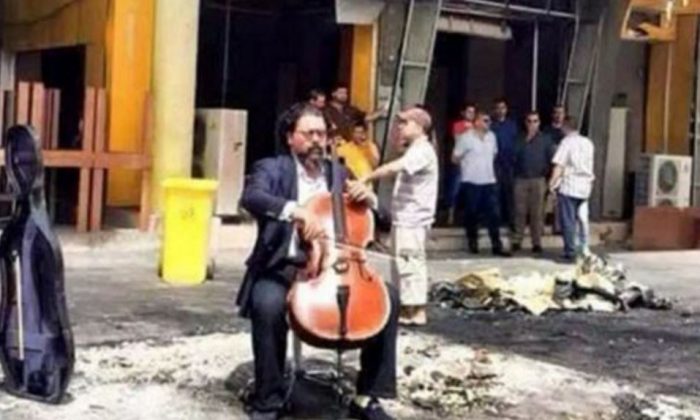 The conductor of the Iraqi National Symphony Orchestra refuses to give in to terrorism.

Karim Wasfi has been taking his cello to sites the Islamic State terror group bombed. He is playing on the war-torn streets to try to combat the fighting.

Passerby are often struck by the juxtaposition of the rubble and the cellist.

Typically, crowds soon form with people smiling and some recording the scene.

“God bless you, we wish our politicians were like you, you embrace us with your art and beauty,” one person told Wasfi after a performance, according to Al Jazeera.

“They went beyond their confusion, and they united through the sound of the cello and the sound of music,” Wasfi said after one such encounter.

He calls his actions the Music for Peace campaign.

Count 18-year-old Mustafa Abdel-Jabbar as one of Wasfi’s supporters. He was passing by with his head down on his way to school when he heard the music and looked up to see Wasfi playing. After finding out more about Wasfi online, Abdel-Jabbar enrolled at Wasfi’s Peace for Art Center.

Wasfi said: “Terrorism threatens us with explosions and weapons and killing, and we answer it with music.”