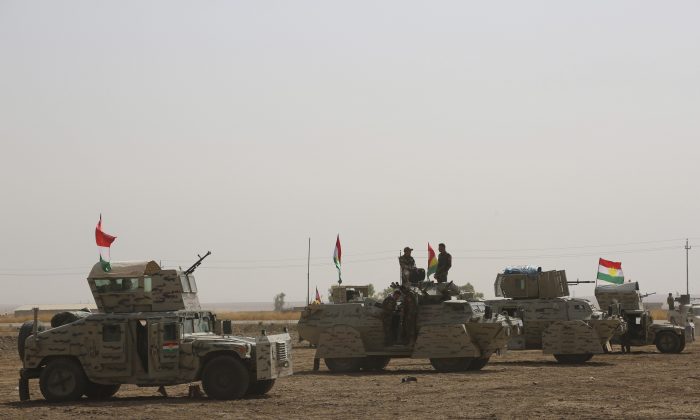 A peshmerga convoy drives towards a frontline in Khazer, about 30 kilometers (19 miles) east of Mosul, Iraq, Monday, Oct. 17, 2016. Iraqi government and Kurdish forces, backed by U.S.-led coalition air and ground support, launched coordinated military operations early on Monday as the long-awaited fight to wrest the northern city of Mosul from Islamic State fighters got underway.(AP Photo)
US

Iraqi Lawmakers Call for Ban on Americans After Trump Order

Iraq’s lawmakers on Monday backed a “reciprocity measure” that would bar Americans from entering Iraq in retaliation for President Donald Trump’s banning of Iraqis and citizens of six other majority-Muslim countries from traveling to the United States.

But though the deputy parliament speaker said the Iraqi vote is non-binding for the government, it will likely strain Baghdad’s relations with Washington amid joint efforts to quash the ISIS group and retake Mosul, Iraq’s second-largest city, from the extremists.

Iraq has been a long-time U.S. ally and Iraqi forces, aided by a U.S.-led coalition, are just over three months into the fight against IS in Mosul, the largest military operation in Iraqi history since 2003.

Lawmakers Kamil al-Ghrairi and Mohammed Saadoun told The Associated Press that the decision was passed by a majority vote in favor but could not offer specific numbers. No further details were available on the wording of the parliament decision.

Deputy Parliament Speaker Sheik Humam Hamoudi described the lawmakers’ decision as a “recommendation” and called on the U.S. Congress to “pressure the American administration to reconsider” Trump’s order — at least when it comes to Iraqis.

Iraq’s Foreign Ministry also denounced Trump’s order, releasing a statement on Monday saying it “regrets such a decision against … an ally and a strategic partner of the United States.”

“It is a surprise that Iraq is covered under this order because it is not among the countries that export terrorists,” the statement added. “The Iraqi community inside the U.S. enjoys a good reputation and its members have not been involved in any terrorist acts.”

The ministry also described Trump’s decision as “wrong” and called for the new U.S. president to reconsider it.

A copy of the Iraqi parliament’s decision obtained by the AP did not say when the reciprocity ban would be enacted or who it would affect — American military personnel, non-government and aid workers, oil companies and or all other Americans doing business in Iraq.

Even if the government in Baghdad were to take up the parliament’s call and implement the ban on Americans entering Iraq, it is not certain that the semi-autonomous northern Iraqi Kurdish region — which has equally strong tie with Washington — would abide by it.

“We have seen the reports of the Parliament vote and are reviewing its details,” the U.S. Embassy in Baghdad told the AP in a written statement. “We refer you to the Government of Iraq for further clarification.”