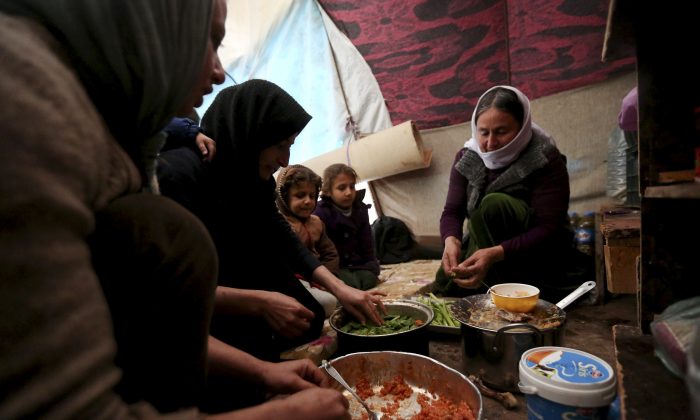 Yazidis displaced by Islamic State group militants share a meal as they take shelter in a partially constructed building in Dohuk, northern Iraq, on Dec. 10, 2014. In August, the militant group captured the northern Iraqi town of Sinjar, near the Syrian border, sending tens of thousands of Yazidis fleeing for their lives. Months later, many from the minority religious sect are living in harsh conditions without electricity, heating or safe drinking water. (AP Photo/Seivan Selim)
Middle East

IRBIL, Iraq—Iraqi Kurdish forces battling Islamic State militants managed on Thursday to open up a corridor to Sinjar Mountain so that thousands of people from the country’s Yazidi minority who have been trapped there can flee, said a senior Kurdish official.

The development was an incremental step in the battle to retake the town of Sinjar, at the foothills of the mountain by the same name, which fell to the Islamic State group in early August.

The Kurdish peshmerga troops, backed by U.S.-led coalition airstrikes, launched the operation to retake the IS-held Sinjar on Wednesday.

Masrur Barzani, Chancellor of Kurdistan Region Security Council, said the Kurdish forces advanced in battle, establishing the passageway to the mountain on Thursday.

Tens of thousands of Yazidis became trapped in the mountain in early August, when the IS extremists captured the towns of Sinjar and Zumar, prompting the exodus.

Many were eventually airlifted off the mountain or escorted by a passageway through Syria back into Iraq, to find refuge in the Iraqi Kurdish semi-autonomous region in northern Iraq, but thousands more came later and remained stuck on the mountain.

“Our hope is that all those people will eventually be able to go back to their own homes and villages and towns but those that are in need of evacuation now, a corridor has been opened to evacuate those people,” Barzani told The Associated Press in Irbil, the Kurdish regional capital.

Yazidis follow an ancient religion with ties to Zoroastrianism.

The Kurdish forces, known also as peshmerga, said in September that they would focus on Sinjar after liberating the nearby towns of Rabia and Zumar.

From The Associated Press. AP writer Sameer N. Yacoub contributed to this report from Baghdad.