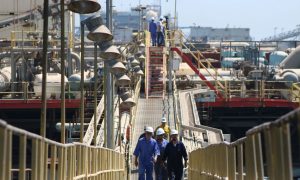 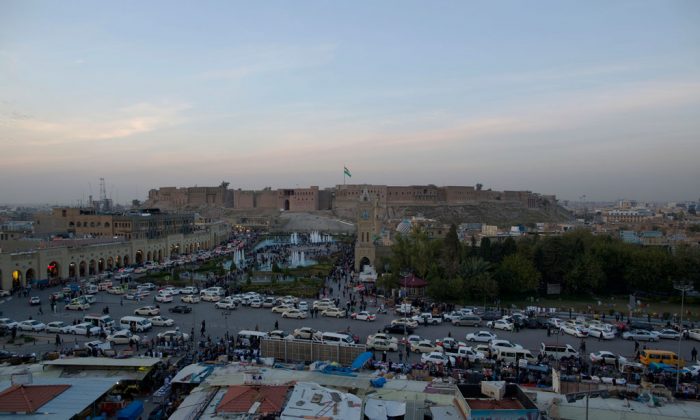 The Citadel of Irbil looms over downtown Irbil, 217 miles (350 kilometers) north of Baghdad, Iraq, on Nov. 13, 2014. The semi-autonomous Kurdish Regional Government has struggled to stabilize the local economy in the face of a militant onslaught and an expensive financial dispute with the Iraqi central government in Baghdad. (AP Photo/Bram Janssen)
Business

IRBIL, Iraq—Goran Mohammed had just completed his second year of university in the northern Iraqi city of Irbil when he dropped out to help his father run the family grocery store. When that still didn’t earn the family enough money, the 19 year old was forced to take a second job as a taxi driver.

“I would prefer to stay in school or go fight (against the Islamic State group) with the peshmerga, but my family needs every penny,” he said.

Mohammed’s difficulties reflect that of his region, where the semi-autonomous Kurdish Regional Government has struggled to stabilize the local economy in the face of a militant onslaught and an expensive financial dispute with the Iraqi central government in Baghdad.

Negotiations between the two sides yielded some progress Thursday after Baghdad agreed to release $500 million in frozen budget payments. In return, the Kurds will provide 150,000 barrels of oil per day for Baghdad to sell. The dispute, which resulted in a freeze on payments of Kurdistan’s share of the national budget, has had a significant impact on Kurds living in the north — many of whom have not received salaries in months.

But while the cash infusion may provide temporary relief, many here say it is nowhere near enough to stabilize the Kurdish economy amid the Islamic State group insurgency, which has driven more than 1 million people to seek refuge in northern Iraq.

Baghdad moved to withhold the 17-percent share of the national budget normally earmarked for the Kurdish region — an estimated $20 billion — after the Kurds independently shipped oil to Turkey in January without going through the Iraqi Oil Ministry. In May, the Kurdish government went a step further and sold the 1.05 million barrels — worth more than $100 million at the time — in Turkey.

Iraq’s Supreme Court in June rejected a request from the central government, under then-Prime Minister Nouri al-Maliki, to outlaw direct oil exports from the Kurdistan region — a decision which some Kurdish officials interpreted as a license for further independent sales. The U.S. has supported the Iraqi government’s restrictions on independent Kurdish oil sales but the State Department has yet to intervene in any sale.

The budget payment may have inspired some confidence in Iraq’s new government, led by Prime Minister Haider al-Abadi, who has promised a quick resolution to the problem. However, Kurdish officials are looking for a more concrete show of good faith from Baghdad.

“It must be solved systematically,” said Sharko Jawdat, a lawmaker with the Kurdish parliament and member of the oil committee. “There needs to be a legal solution to these problems.”

In recent weeks, however, the battle against the Islamic State group has overshadowed the issue. Tens of thousands of men have left their homes and jobs for the front lines, further adding to the regional economic slowdown.

The Kurds have taken advantage of the chaos to push into disputed territory, including the oil-rich province of Kirkuk, reigniting a decades-old dream of Kurdish independence. Meanwhile, northern Iraq faces an unprecedented burden of providing shelter to more than 1 million people who fled the fighting.

“It’s putting tremendous pressure on the Kurdish government,” said Ali Kurdistani, an independent political analyst in the Kurdish province of Sulaymaniyah. “When you have this many refugees … it affects jobs, since they are also looking for jobs. There aren’t enough schools for students, there aren’t enough places to live, and other things like health care and basic services aren’t enough.”

Mario al-Jebouri, who owns a real estate company in Irbil, said property prices have plummeted after being hit by the budget cut and the Islamic State group’s offensive.

“Some developers are selling their properties at a 50-percent lower cost than they were eight months ago,” he said. “The infrastructure projects need a cash injection, which is far greater than $500 million (but) the first priority is to have people receive their salaries.”

Still, some are hopeful that Thursday’s agreement will have a positive impact on business.

“We were obliged to decrease the prices because nobody was buying,” said Yassin Ahmed, a salesman at the secondhand market in Irbil. “If the government pays the salaries people will buy more.”