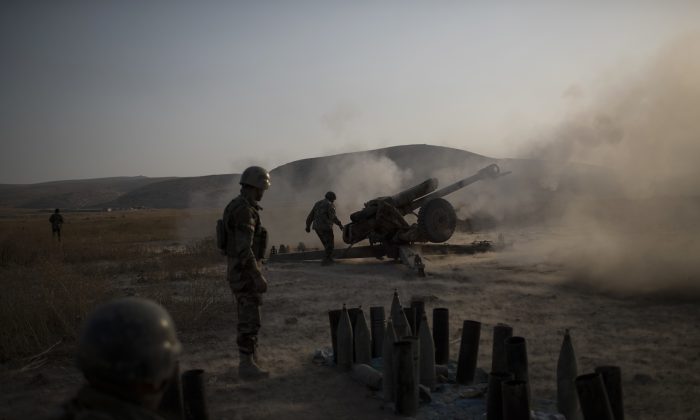 NEAR BASHIQA, Iraq—Iraqi Kurdish fighters exchanged heavy fire with ISIS militants early on Monday as they advanced from two directions on a town held by the ISIS terrorist group east of the city of Mosul.

The early morning offensive to reclaim the town of Bashiqa is part of the broader push to drive ISIS out of Mosul, Iraq’s second-largest city and the militants’ last major urban stronghold in the country.

Bashiqa, which is believed to be largely deserted except for dozens of ISIS fighters, is about 13 kilometers (8 miles) northeast of the edge of Mosul and about 20 kilometers from the city center.

Iraqi special forces entered Mosul last week and have made some progress in gaining a foothold on the city’s eastern edges. But progress inside the city has been slowed as troops push into more densely populated areas.

Iraq’s special forces are suffering casualties as militant bog them down with suicide car bombs, booby traps and close-quarters fighting along narrow streets.

ISIS still holds territory to the north, south and west of Mosul.

Iraqi government and Kurdish forces, backed by a U.S.-led coalition and joined by government-sanctioned militias, are fighting to drive ISIS out of those surrounding areas and open additional fronts to attack Mosul itself.

Bashiqa has been surrounded by Kurdish forces, known as peshmerga, for weeks but Monday’s push appears to be the most serious yet to drive ISIS from the town.

Kurdish forces launched mortar rounds and fired heavy artillery into the town on Sunday in advance of the offensive. More artillery and air strikes hit the town early Monday as the Kurdish forces’ advance got underway.

The U.S. special envoy to the anti-ISIS coalition, Brett McGurk, said late on Sunday that the three-week offensive against the extremists in Mosul is proceeding “ahead of schedule.”

Speaking to reporters in Jordan, McGurk said the fight to degrade the group and break up its self-declared caliphate in Syria and Iraq was expected to take about three years.