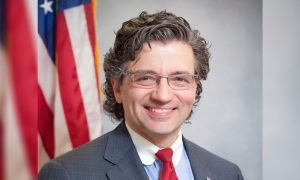 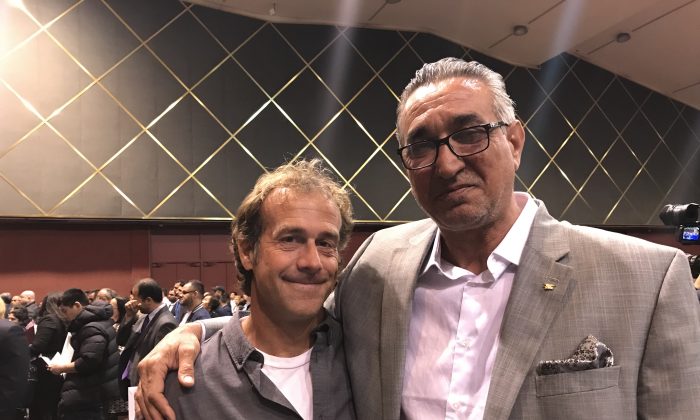 Iraqi Interpreter for Navy SEALS Sworn In as US Citizen

SAN DIEGO—For years, the man the U.S. Navy SEALs called by his code name “Johnny Walker” risked his life serving the U.S. military as an interpreter during the war in Iraq. Now, more than 10 years after arriving in the United States, Walker is officially an American citizen.

“It is a crazy feeling. I mean, I am lucky. … I am the luckiest guy in the world,” Walker told The Epoch Times on March 20.

As he put his hand over his heart while the national anthem played during the ceremony, Walker broke into tears, saying all of the memories of the missions he’s served and the sacrifices of the men he calls his brothers came rushing back in a single moment.

“It brings all the sacrifice of all my brothers and my sisters who fight for what they believe. Like my brother, my own brother, who fought al-Qaeda, and they kill him—I remember him, I remember Chris Kyle, Luis [Lastra] … all those heroes.”

When the U.S. military arrived in Iraq, Walker went from base to base looking for a job; he started working with the military police shortly after. As his reputation as a capable and fearless interpreter grew, an elite group of U.S. Navy SEALs hired him and started calling him “Johnny Walker,” after his love for Johnnie Walker whiskey—a name he says he loves more than his old name. It was also to protect him and his loved ones, and he uses it even today, as he still has extended family in Iraq.

Missions with the U.S. military were dangerous in and of themselves, but eventually, Iraqis working with Americans became targets for violence. The military interpreter received death threats, had a bounty put on him, and carried an AK-47 with him for protection.

Still, Walker remained loyal in his service to the U.S. military, serving in more than 1,000 missions with whichever group of soldiers needed him, wherever he was needed in his home country.

Walker said he’s held the American dream in his heart ever since he was a teenager, and watching the men he worked with sacrifice and fight for what they believed in inspired him to make that dream reality.

“That dream became solid fact,” Walker said. “I have to live in that country, because I want my kids to have a free life.”

Then, in 2009, the military interpreter and his family came to the United States under a special U.S. visa program for citizens who face danger in their home countries because of their affiliations with the United States.

Walker applied for U.S. citizenship years ago, but even with military recommendations, his case got lost in the shuffle. Now, years after submitting an official application, he was sworn at the same time as his daughter in San Diego.

Although reciting the oath lasted just a few minutes, Walker said it was a moment he’ll never forget.

“I came from a country where we saw blood and sadness every second … but the oath, it takes me down. It means a lot,” Walker told The Epoch Times. “It’s a feeling that it’s a first time in my life. Like I know it’s just a few minutes but I catch it, I steal it from the time, and I will keep it always in my heart.”

Walker said all of his sacrifices were more than worth it, and that it’s the responsibility of new U.S. citizens, the new blood of the nation, to keep the United States a free country—at the core of which is love and loyalty. That’s one of the reasons he believes legal immigration is necessary.

“If you have no loyalty, why is he coming? There’s no reason,” Walker said. “He can have a free meal? If this is his goal, I don’t think he deserves to be American.

Walker currently lives in San Diego with his wife and three children. All are U.S. citizens.