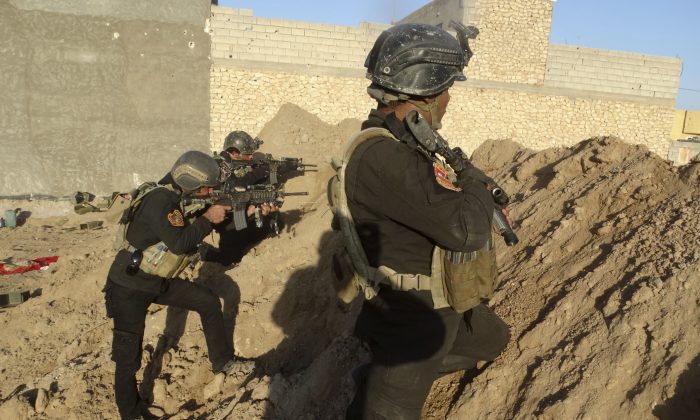 Iraqi Forces Surround Ramadi, but It Could Be a Long Siege

BAGHDAD—After months of sluggish progress, stalled advances, and outright failures, Iraqi troops and militias backed by U.S.-led airstrikes have surrounded the key city of Ramadi and appear poised to launch a new attempt to wrest it from the Islamic State in Iraq and Syria (ISIS).

The battle that is shaping up threatens to turn into a drawn-out siege, with thousands of residents caught in the middle as the forces try to wear down the extremists since they took over the capital of western Anbar Province in May. Western officials and analysts warned that the strategy of a methodical, slow siege could make the fight even more difficult.

On Monday, Nov. 30, the Iraqi military dropped leaflets into the city, telling the remaining residents—estimated at anywhere from 4,000 to 10,000—to leave, the strongest signal yet that an assault is imminent.

But residents told The Associated Press on Tuesday that the extremists have clamped down, setting up checkpoints across the city to monitor civilians’ movements and prevent anyone from going.

“Loudspeakers from mosques give warnings that civilians are not allowed to leave, and anyone who tries to do so will be either arrested or killed,” one resident said, speaking on condition of anonymity for fear for his safety.

Ramadi, like the rest of Anbar Province, is overwhelmingly Sunni Muslim, the minority community that complains of discrimination by the Shiite-led government in Baghdad. Some Sunnis in other parts of Anbar and in northern Iraq welcomed ISIS rule, at least initially.

Resentment of the extremists has been stronger in Ramadi, but some residents worry about the cost of dislodging ISIS, also known as ISIL and its Arabic acronym, Daesh.

ISIS’ capture of Ramadi was an embarrassing blow to the Iraqi military.

“Of course we want this to end,” another resident said, referring to ISIS rule and the government siege. But he said he also fears increased airstrikes and clashes, with him and his family unable to escape.

ISIS’ capture of Ramadi was an embarrassing blow to the Iraqi military. The two sides had been battling over it since the previous summer. But in May, the terrorists unleashed a wave of suicide bombings that stunned the city’s defenders, and police and troops collapsed and fled. The jihadis swept in and took control, raising their black banner over the main government headquarters.

The city became part of the large swath of territory that ISIS holds in Iraq, including almost all of Anbar Province and the northern city of Mosul, linked with areas of northern and eastern Syria that they also control.

For several months, Iraqi troops and an umbrella group of militias—mainly Shiites—have been fighting in Anbar. Although progress was often slow, they clawed back territory surrounding the city. In recent days, their determination to retake Ramadi has been boosted by a victory in northern Iraq by Kurdish forces, who recaptured the strategic town of Sinjar.

The most recent estimates from the U.S.-led coalition say there could be as many as 1,000 ISIS fighters inside Ramadi. Iraqi officials said their forces surrounding the city number several thousand.

The encirclement of Ramadi is a key first step in retaking it, said Interior Ministry spokesman Saad Maan. The Iraqi forces will start clearing the city of ISIS “in the coming days, less than a week,” he added.

“The aim is to cut off all supplies to Daesh,” said Brig. Gen. Ahmed al-Bilawi, who commands a unit within the Anbar command. “We are just awaiting the zero hour to attack the center of the city of Ramadi in order to free it.”

But a long siege could just allow ISIS fighters to dig in more, said retired Lt. Gen. Mark Hertling, who led U.S. forces in Iraq in 2007–08 as they fought to end sectarian warfare that pushed the country to the brink of civil war.

Iraqi commanders believe ISIS fighters “will use up ammunition, run out of food and, especially, water,” Hertling said. But that will take some time, which ISIS can “take advantage of” to carpet the city with homemade bombs, build tunnels to avoid airstrikes, and move valuable assets out of the area, he said.

Western military doctrine, he added, “is built on taking away the advantages of the defender by keeping him under pressure, attacking vigorously at multiple points, and being more mobile.” That requires a level of command, control, and training, which Iraqi forces don’t have, Hertling said.

Gen. Joseph Dunford, chairman of the Joint Chiefs of Staff, said in Washington that the Iraqi forces have been “tightening the noose” around Ramadi, but at a slower pace than the Americans would like.

“Progress that has been made over the past several weeks, while real, is not necessarily significant,” Dunford testified before the House Armed Services Committee.

Dunford said it will probably be “months from now” before the Iraqis launch an operation to retake Mosul.

Another Western coalition official, who has knowledge of the Iraqi forces’ level of preparedness, said an operation in Ramadi will probably involve high casualties—something the Iraqis “aren’t willing to accept” at this point.

“They just aren’t there yet,” he said, speaking on condition of anonymity because he was not authorized to talk to the media.

Another issue that has slowed the Anbar offensive has been the role of Shiite militiamen who make up the bulk of the fighters who joined Iraqi forces on the ground. The Shiite militiamen have been a key to many government victories but also have been accused of widespread abuses against Sunnis in areas retaken from ISIS.

While the central government has vowed to arm pro-government Sunni tribesmen in Anbar, few have received weapons. Sunni lawmakers accuse the Shiites in the government of mistrusting Iraq’s Sunnis, many of whom initially welcomed ISIS rule after years of being disenfranchised under former Prime Minister Nouri al-Maliki.

When Maan was asked about the high number of civilians that could be trapped inside Ramadi once the fight gets underway, the Interior Ministry spokesman said he was confident they would be able to flee “to a safe place.”

“We are focusing now on the enemy only,” he added.