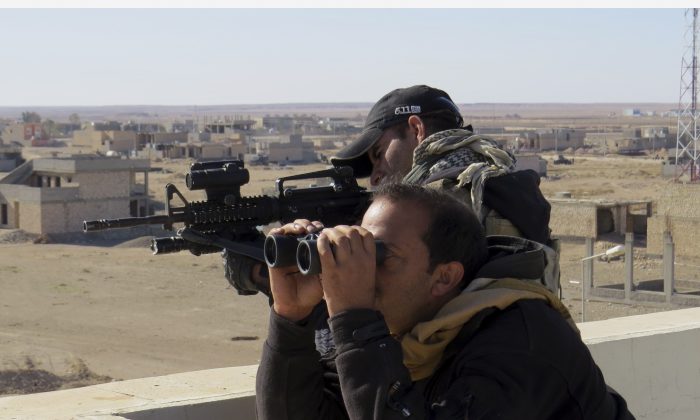 BAGHDAD—Iraqi troops battling the Islamic State (ISIS) on Tuesday captured a neighborhood on the outskirts of militant-held Ramadi and a provincial operations center to the north of the city, officials said.

It was the first significant incursion into Ramadi since Iraq announced a major offensive last month aimed at taking back the provincial capital. Iraqi troops backed by Shiite militiamen recently seized the Palestine Bridge, a main gateway, completing their encirclement of the city.

Sabah al-Numani, a spokesman for an Iraqi counterterrorism unit fighting in Ramadi, said that while much of the former operations center had been destroyed by ISIS fighters, the Iraqi flag had been raised above one of the remaining buildings. He said Iraqi troops also liberated the southwestern Tamim neighborhood.

“This area is considered an important region for Daesh,” al-Numani said, using the Arabic acronym for the Islamic State.

He cautioned that there is still a long battle ahead, and that Warar River, a tributary of the Euphrates, separates the troops in Tamim from the center of Ramadi.

“We cannot give a specific time we will liberate the city,” he said, adding that ISIS had “destroyed many of the bridges” over the river.

Col. Steven Warren, the spokesman for the U.S.-led coalition in Baghdad, said Iraqi forces had reported to the coalition that they had cleared the Tamim neighborhood.

ISIS captured Ramadi in May, dealing the biggest blow to Iraqi forces since the fall of the city of Mosul in the summer of 2014.

The Iraqi government announced a counteroffensive shortly after the city’s fall, but progress has been sluggish.

On Monday, the U.S.-led coalition said it had carried out 20 airstrikes in Iraq, six of which targeted ISIS units, weaponry and positions near Ramadi.