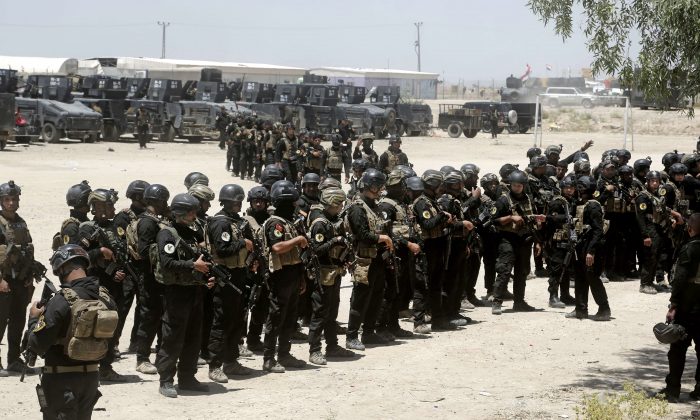 Iraq's elite counterterrorism forces gather ahead of an operation to retake ISIS-held city of Fallujah, Iraq, on May 29, 2016. (AP Photo/Khalid Mohammed)
Middle East

TARIQ CAMP, Iraq—Iraq’s special forces completed a troop buildup around Fallujah on Sunday ahead of an operation to retake the Islamic State-held city west of Baghdad, a military officer said, as the militants attacked a newly-liberated town to the west.

Teaming up with paramilitary troops and backed by aerial support from the U.S.-led coalition, the government launched a large-scale offensive to dislodge ISIS militants from Fallujah a week ago.

The city, located about 40 miles (65 kilometers) west of Baghdad, is one of the last major ISIS strongholds in Iraq. The extremist group still controls territory in the country’s north and west, including Mosul, the country’s second largest city.

The last battalion from Iraq’s Special Forces Service arrived at dawn Sunday at the sprawling Tariq Camp outside Fallujah, said Maj. Dhia Thamir. He declined to comment on troop numbers or the timing of the expected assault.

He said troops have recaptured 80 percent of the territory around the city since the operation began and are currently battling ISIS to the northeast as they seek to tighten the siege ahead of a planned final push into the city center.

The militants meanwhile launched an attack Sunday on the town of Hit, 85 miles (140 kilometers) west of Baghdad, which was recaptured by government troops last month. A military officer said the extremists entered three neighborhoods and were engaged in heavy clashes with Iraqi forces backed by U.S.-led airstrikes. The officer was not authorized to release information so spoke on condition of anonymity.

Fallujah, which saw some of the heaviest fighting of the 2003-2011 U.S.-led military intervention, was the first city in Iraq to fall to ISIS. The extremists seized control of Fallujah in January 2014, six months before they swept across northern and western Iraq and declared a caliphate.