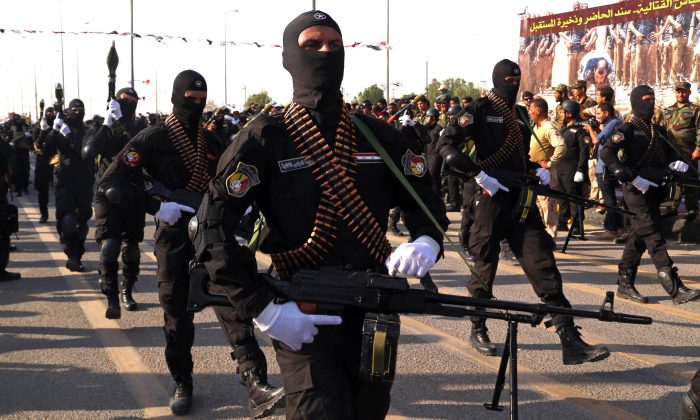 Iraq to Share Intelligence on ISIS With Syria, Russia and Iran

BAGHDAD—Iraq’s military said Sunday it will begin sharing “security and intelligence” information with Syria, Russia and Iran to help combat the Islamic State (ISIS), a move that could further complicate U.S. efforts to battle the extremists without working with Damascus and its allies.

A statement issued by the Joint Operations Command said the countries will “help and cooperate in collecting information about the terrorist Daesh group,” using the Arabic acronym for the Islamic State.

Iraq has long had close ties with neighboring Iran and has coordinated with Tehran in fighting ISIS—which controls about a third of Iraq and Syria in a self-declared caliphate. Iran has sent military advisers to Iraq and worked closely with Shiite militias battling ISIS.

A U.S.-led coalition has meanwhile been conducting airstrikes against ISIS in Iraq and Syria as well as training and advising Iraqi forces, but U.S. officials insist they are not coordinating their efforts with Iran.

The U.S. also refuses to cooperate with Syrian President Bashar Assad, who Washington has insisted should step down. Russia and Iran have provided crucial support to Assad since Syria’s uprising began in 2011.

The Baghdad-based spokesman for the U.S.-led campaign against the ISIS group, Col. Steve Warren, said the U.S. remains committed to working with Iraq to defeat the extremists.

“We recognize that Iraq has an interest in sharing information on ISIS with other governments in the region who are also fighting ISIS,” Warren said, using another acronym for the militant group. “We do not support the presence of Syrian government officials who are part of a regime that has brutalized its own citizens.”

U.S. Secretary of State John Kerry, who met with Russian Foreign Minister Sergei Lavrov on the sidelines of the U.N. General Assembly on Sunday, said in response to the Iraqi statement that “all of the efforts need to be coordinated. This is not yet coordinated.”

“I think we have concerns about how we are going to go forward. That is precisely what we are meeting on to talk about now. Our presidents will be meeting tomorrow,” he told reporters, referring to talks between U.S. President Barack Obama and Russian President Vladimir Putin.

Lavrov, when asked about the purpose of the cooperation with Iraq, said it was to “coordinate the efforts against ISIS.”

Moscow has been ramping up its involvement in Syria in defense of Assad by ferrying weapons, troops and supplies to an airport near the Syrian coastal city of Latakia in what the U.S. sees as preparations for setting up an air base there.

The Iraqi military statement said Moscow is increasingly concerned about “the presence of thousands of terrorists from Russia who are carrying out criminal acts with Daesh.”