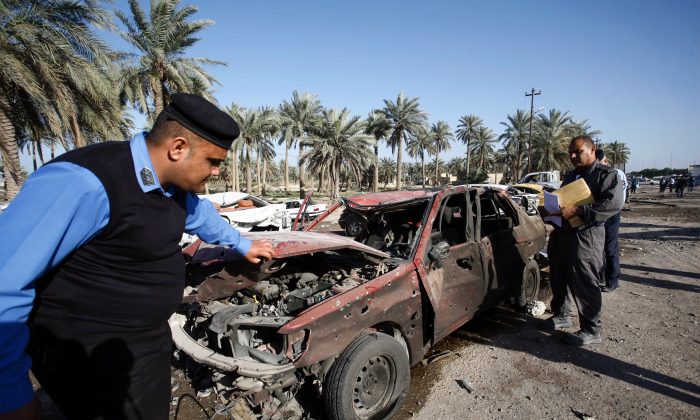 Iraqi emergency responders inspect debris at the site of a truck bomb, that exploded at a crowded checkpoint, in the Iraqi city of Hilla, south of Baghdad on March 6, 2016. The Islamic State jihadist group claimed responsibility for a suicide truck bomb blast that killed at least 47 people in the city of Hilla. (Haidar Hamdani/AFP/Getty Images)
Middle East

BAGHDAD—A suicide bomber on Sunday rammed his explosives-laden fuel truck into a security checkpoint south of Baghdad, killing at least 47 people and wounding dozens, officials said, the latest episode in an uptick in violence in the war-ravaged country.

No one immediately claimed responsibility for the attack, which bore the hallmarks of the Islamic State (ISIS). ISIS and other Sunni militants frequently use car bombs and suicide attacks to target public areas and government buildings in their bid to undermine confidence in the Shiite-led government in Baghdad.

Among the dead were 39 civilians, while the rest were members of the security forces. The attacker struck shortly after noon when the checkpoint at one of the entrances to the city of Hillah was crowded with dozens of cars, a police officer said.

He added that up to 65 other people were wounded and nearly 50 cars were damaged. Hillah is located about 95 kilometers (60 miles) south of Baghdad.

A medical official confirmed the causality figures. Both officials spoke on condition of anonymity as they were not authorized to release information.

Iraq has seen a spike in violence in the past month with suicide attacks in and outside Baghdad, all claimed by ISIS, killing more than 170 people. ISIS controls large swaths of Iraq and neighboring Syria and has declared an Islamic “caliphate” on the territory it holds.

According to United Nations figures, at least 670 Iraqis were killed last month due to ongoing violence, of whom about two-thirds were civilians.