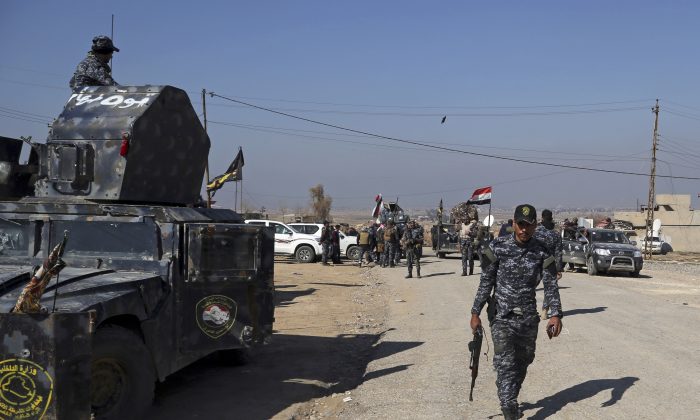 SOUTH OF MOSUL, Iraq—Closely supported by the U.S.-led international coalition, Iraqi forces secured a series of cautious advances on Thursday, pushing into a sprawling military base outside of Mosul and onto the grounds of the city’s airport, where they took control of the runway.

The three-pronged attack began just after sunrise, with three convoys of Iraqi forces snaking north across Nineveh’s hilly desert on Mosul’s southern approach. Iraq’s special forces joined federal police and rapid response units in the push—part of a major assault that started earlier this week to drive IS from the western half of Iraq’s second-largest city. By afternoon they had entered the Ghazlani military base south of the city, as well as the airport.

Iraqi helicopters circled above Mosul firing down onto the city’s southwestern edge. Coalition and Iraqi airstrikes that hit targets inside Mosul sent plumes of white smoke into the air on the horizon.

“We’ve broken the first line of ISIS defenses,” said Iraqi special forces Lt. Yaser Mohsen, whose troops captured the key village of Tell al-Rayan, where Islamic State snipers had been slowing the government offensive. They then moved to the edge of Mosul’s western Mamun neighborhood, where they were working to surround it before punching into the city.

Several armored coalition vehicles could be seen in the line of military vehicles, and security officials said coalition troops were embedded with the forward advancing forces, advising the Iraqi troops as they conducted the assault. The officials spoke to The Associated Press on condition of anonymity because they were not authorized to talk to reporters.

The cautious advance stood in sharp contrast to the first days of Iraq’s push into Mosul from the east, when Iraqi forces quickly advanced deep into the city’s congested neighborhoods, where they were hit with heavy IS counterattacks, including dozens of car bombs that struck the slow-moving Iraqi convoys with deadly consequences.

Clashes at Mosul’s airport continued for hours, with ISIS terrorists hunkered down inside several airport buildings. By early afternoon, federal police commander Maj. Gen. Raid Shakir Jawdat told Iraqi state TV that his troops had control of “more than half” of the airport complex. About 200 families were evacuated to safe areas in government-controlled areas, he said.

Separately, the spokesman of the Joint Military Operation Command, Brig. Gen. Yahya Rasool confirmed to the AP that Iraqi special forces entered the Ghazlani military base next to the airport on the southern edge of the city.

On Sunday, after weeks of preparations, Iraqi forces launched the operation to take Mosul’s western half, with the Iraqi regular army and federal police forces taking part in the initial push. Since then, the military says they have retaken some 120 square kilometers (nearly 50 miles) south of the city.

Thursday marked the first time the Iraqi special forces, which played a key role in securing the eastern half of the city, joined the fight for western Mosul.

A special forces officer overseeing the operation said ISIS targeted the advancing troops with dozens of bombs dropped from drones. The officer, who spoke on condition of anonymity because he was not authorized to brief the media, said his troops sustained at least a dozen casualties, including some inflicted by a car bomb attack.

Making up for a lack of fighters, ISIS terrorists are increasingly relying on modified commercial drones to guide suicide car bombers to their targets and to launch small-scale airstrikes on Iraqi forces.

While some 750,000 civilians are estimated to be trapped in Mosul’s western sector, only a few dozen could be seen fleeing the city on foot Thursday alongside convoys of Iraqi Humvees.

Hamad Khalaf fled the Mamun neighborhood in southern Mosul with his wife and four children. Covered in dust, he said ISIS terrorists were targeting people as they tried to escape.

“There are many injured still inside,” he said.

“We’ve been walking since the morning,” said his wife, Badriya, cradling their 1 ½-year-old daughter in her arms. A few meters (yards) away a mortar fired from inside the city hit a nearby hill.

In January, Iraqi authorities declared the eastern half of Mosul “fully liberated” from IS. The battle for western Mosul, the extremist group’s last major urban bastion in Iraq, is expected to be the most daunting yet.

The streets are older and narrower in the sector of the city that stretches west from the Tigris River that divides Mosul into its eastern and western halves. The dense urban environment will likely force Iraqi soldiers to leave the relative safety of their armored vehicles.

Mosul fell to IS in the summer of 2014, along with large swaths of northern and western Iraq. But the Sunni militant group has been steadily losing territory, as backing by the U.S.-led coalition proved critical for Iraqi government efforts clawing back territory lost to the extremists.

ISIS has suffered losses in Syria as well: Turkish troops and Syrian opposition forces seized the center of the ISIS-held town of al-Bab on Thursday, breaking a weeks-long deadlock between the two sides at the periphery of the town, Turkey’s state news agency and opposition activists said. The northern Syrian town in Aleppo province is one of the militants’ last urban strongholds in Syria west of Raqqa, ISIS’s de facto capital.

The Iraqi special forces officer overseeing this week’s operation said he expected heavier ISIS resistance once his forces punched inside the city, but he said Iraqi forces wouldn’t make the same mistakes they made in the east: quickly punching into dense neighborhoods only to be hit with overnight ISIS counterattacks.